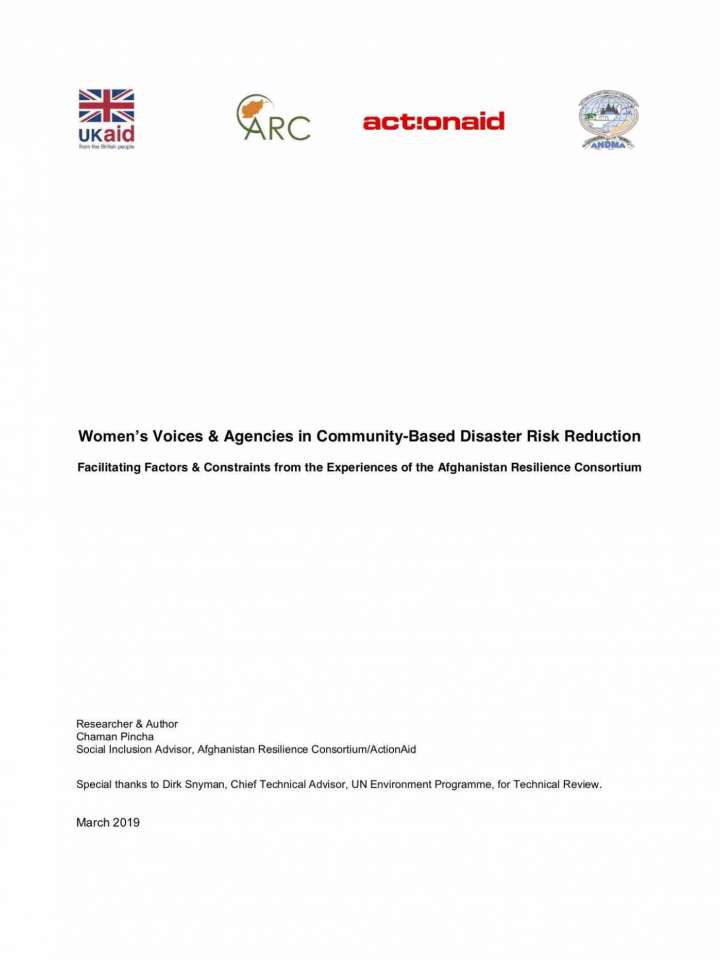 This technical paper on women’s voices and agencies in community-based disaster risk reduction (CBDRR) draws on the Gender-Focused Situation Analysis carried out in project sites of the members of the Afghanistan Resilience Consortium (ARC). The ARC has been implementing the DFID-supported Strengthening Resilience of Vulnerable Communities in Afghanistan Against Disaster (SRACAD) project since 2014. This project, rooted in a CBDRR approach, is implemented by the ARC1 in 705 communities across nine provinces of Afghanistan. Based on the guiding principles of the Sendai Framework for Disaster Risk Reduction 2015–2030 (SFDRR), the central theme of the project is to “leave no one behind” by reaching out through an “all-of-society” approach for advancing the agenda of CBDRR.

These principles very clearly underpin the imperative of inclusion of hitherto invisible and marginalised groups experiencing multiple and intersecting vulnerabilities – i.e. age, disability, ethnicity, class, marital status, minority and displacement status – with gender cutting across them all. Gender inclusion with all its intersecting dimensions is embedded in the now widely recognised fact that, for communities to become resilient, it is a prerequisite that the gender-based vulnerabilities of women – who constitute half of society – are analysed, addressed, and finally transformed into capacities. This paper brings to the foreground the voices and agency of women as factors that turn gender-based vulnerabilities into capacities. If resiliencies are a function of capacities, then the existence and strength of the agency and voices of women are robust indicators of the degree to which they have attained resilience (in this context, against disasters).

The paper focuses on women because, as will be clearly highlighted, they remain most vulnerable to disasters because of their marginalisation in socio-cultural, political, economic and other arenas.