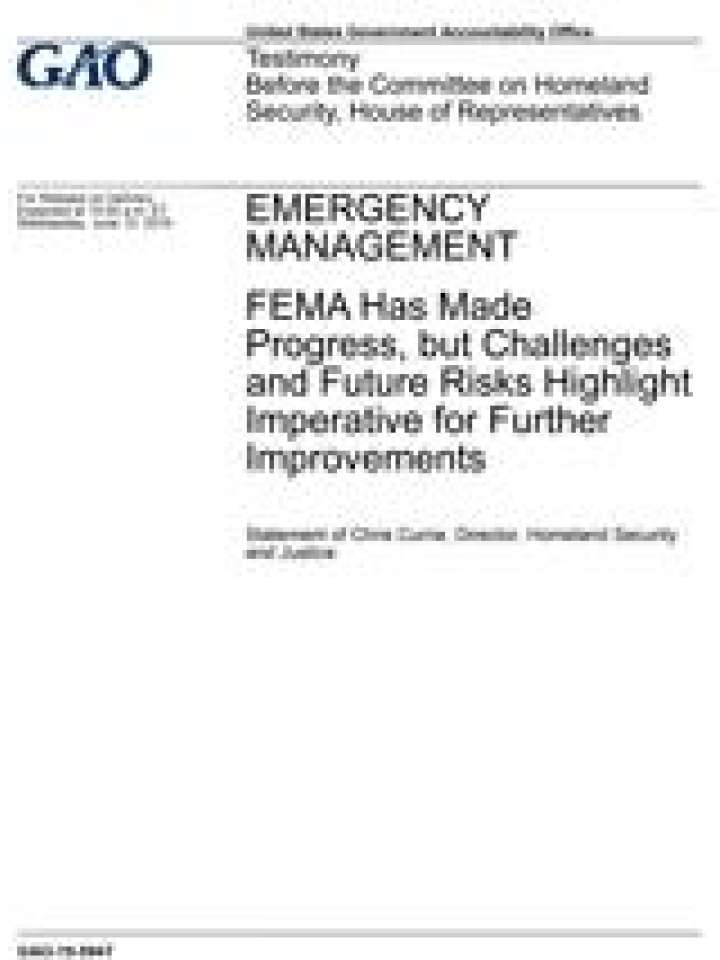 In the United States, recent hurricanes, wildfires, and flooding have highlighted the challenges the federal government faces in responding effectively to natural disasters. The 2017 and 2018 hurricanes and wildfires affected millions of individuals and caused billions of dollars in damages. In March 2019, the Midwest experienced historic flooding that affected millions of acres of agriculture and damaged significant infrastructure. Since 2005, federal funding for disaster assistance is at least $450 billion. Increasing reliance on federal help to address natural disasters is a key source of federal fiscal exposure, particularly as certain extreme weather events become more frequent and intense due to climate change.

This report was presented as a statement before the Committee on Homeland Security. It discusses, among other things, FEMA’s progress and challenges related to disaster resilience, response, recovery, and workforce management. This paper is based on GAO reports issued from March 2011 through May 2019, and also includes preliminary observations from ongoing GAO reviews of FEMA operations. For ongoing work, GAO reviewed federal laws; analyzed documents; interviewed agency officials; and visited disaster damaged areas in California, Florida, South Carolina, North Carolina, Puerto Rico, Texas, and the U.S. Virgin Islands, where GAO also interviewed FEMA and local officials.

GAO has made numerous recommendations in its prior reports to FEMA designed to address the challenges discussed in this paper. As of May 2019, FEMA has addressed about half of these recommendations and GAO is monitoring FEMA’s ongoing efforts.