Every federal grant dollar spent on natural disaster mitigation projects, such as elevating buildings or retrofitting infrastructure to reduce the impact of future events, saves $6 on average in post disaster recovery costs, according to a 2018 study by the National Institute of Building Sciences (NIBS).

But as with all federal spending, the outcomes differ from state to state, with estimated benefits ranging from nearly $7 saved for each $1 spent in Kansas to just over $3 for every $1 invested in California between 1993 and 2016. The NIBS analysis also shows variation in potential savings across different natural hazards, such as floods, high winds, earthquakes, and wildfires. Understanding the differences in state- and hazard-specific returns on spending can help state policymakers as they evaluate opportunities to invest in mitigation, using both state and federal funding.

The study looks at the benefit-cost ratios, or the amount of savings that result from a specified level of investment. NIBS measures savings from mitigation activities by calculating estimated reductions in disaster impacts such as property repair costs, casualties, business interruptions, and administrative fees associated with insurance. The investments come in the form of federal spending on 23 grant programs administered by the Federal Emergency Management Agency (FEMA), the Economic Development Administration (EDA), and the Department of Housing and Urban Development (HUD), combined with any state and local funds required to match some of those programs.

NIBS did not include spending on mitigation activities performed directly by the federal government, like U.S. Army Corps of Engineers flood control projects or U.S. Department of Agriculture prescribed burns, in its analysis. (See “Agencies and programs providing grant data” for more details.) Taken together, these benefits and costs result in the nationwide ratio of nearly $6 to $1.

Based on underlying data provided by NIBS, Pew determined that among the contiguous 48 states, the savings from mitigation investments ranged from $6.81 to $1 spent in Kansas to $3.26 to $1 in California. (See Figure 1.) Alaska and Hawaii were not included in NIBS’s analysis because of data limitations. Because NIBS uses a representative sample of mitigation projects for its calculation, small sample sizes in some states mean that their state- and hazard-specific ratios may be less definitive than those for other states. 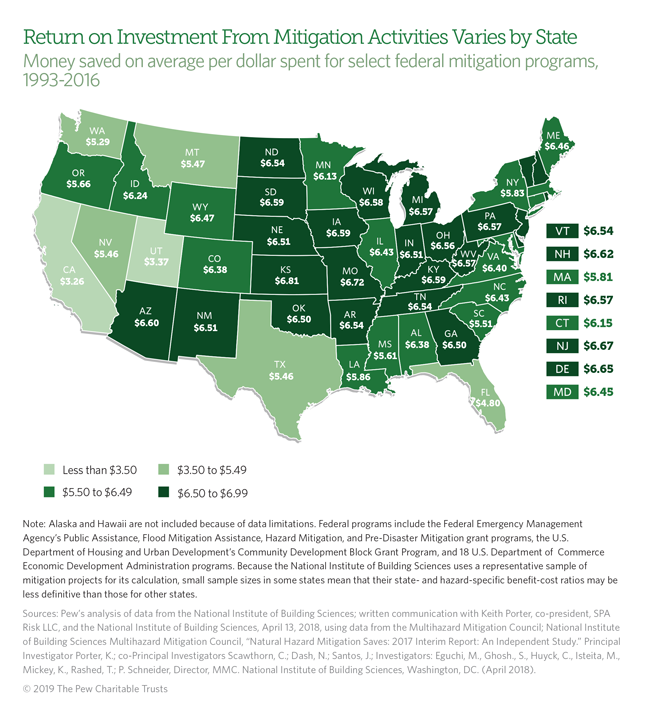