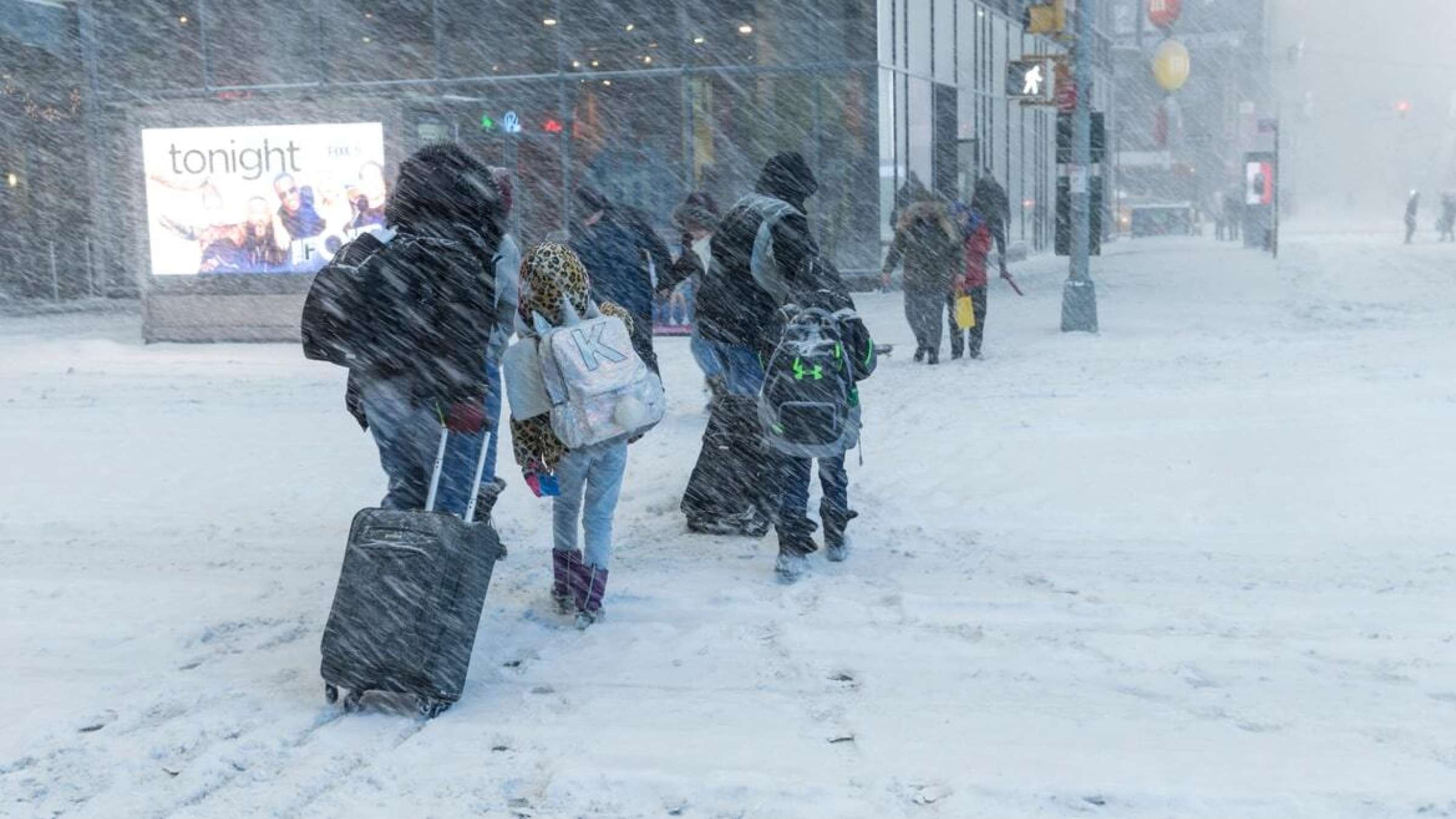 Lev Radin/Shutterstock
The images of disasters in 2021 are disturbing. Climate research increasingly confirms that extreme weather has become more likely. Societies need to urgently adapt to increasing weather risks and make climate protection a priority. Insurers meet their responsibilities by covering a portion of the risks and losses. By applying risk-adequate premiums, they put a price on hazards, thereby encouraging carefully considered behaviour to limit the losses. At the same time, severe volcanic eruptions and earthquakes in 2021 showed that we should not overlook these categories of disasters either.
Torsten Jeworrek, Member of the Board of Management

Worldwide, disasters caused substantially higher losses in 2021 than in the two previous years. Based on provisional data, storms, floods, wildfires and earthquakes destroyed assets worth US$ 280bn. Losses in the previous year amounted to US$ 210bn, while in 2019 they were US$ 166bn. Roughly US$ 120bn of losses were insured, which was also more than in the two previous years (2020: US$ 82bn, 2019: US$ 57bn). The insurance gap, in other words the uninsured portion, declined slightly due to a higher proportion of losses in the USA, but was still approximately 57%. Almost 10,000 people lost their lives in natural disasters in 2021, a death toll comparable with those of recent years.

In December 2021, a series of severe storms across several states in the central and southeastern USA led to exceptionally high losses, especially for the month of December. Dozens of violent tornadoes with wind speeds of up to 310 km/h (190 mph) carved a trail of devastation across six states. Especially hard hit was the town of Mayfield, Kentucky, where a long-track, massive wedge-type EF4 tornado roared through the neighbourhood. Large parts of the town, including a candle factory, were completely destroyed. According to initial estimates, overall losses amount to around US$ 5.2bn, with projected insured losses of US$ 4bn. An estimated 90 people were killed.

The costliest disaster in 2021 was Hurricane Ida, which made landfall on 29 August 90 km south of New Orleans as a major hurricane (Category 4, the second-most destructive), with wind speeds of around 240 km/h (150 mph). Tens of thousands of buildings were damaged or destroyed. The New Orleans levee system, which was strengthened following Hurricane Katrina in 2005, withstood the storm surges, thereby preventing much higher losses. Hurricane Ida then tracked to the northeast, causing severe flooding, in particular in New Jersey and the New York City metropolitan area. Overall, Hurricane Ida caused losses of US$ 65bn, of which approximately US$ 36bn were insured (55%). A total of 114 people lost their lives. Hard on the heels of the previous record-setting 30 named tropical storms in 2020, storm activity during the 2021 hurricane season was again significantly above the long-term average (14.3 for the period 1991 to 2020), with 21 named tropical storms.

In February, an exceptional cold wave brought icy temperatures as far as the southern USA. A temperature of -8°C (17°F) was recorded in the southern Texas city of Houston. Although the state of Texas experiences a major freeze event about once a decade, the state’s energy, infrastructure and buildings are often inadequately prepared for such conditions. Millions of people were left without electricity. Overall, with losses of US$ 30bn (half of which were insured), the event was the year’s third-costliest disaster.

In Europe, torrential rainfall in July 2021 triggered exceptionally severe floodings that caused devastating losses in local areas, particularly in western Germany. In the regions affected, the rainfall caused by the low-pressure system “Bernd” was the highest in over a hundred years. In tributaries, such as the River Ahr in the Rhineland-Palatinate, the deluge triggered flash floods that swept away countless buildings. There was also severe damage to infrastructure, such as railway lines, roads and bridges. More than 220 people were killed.

What effect is climate change having?

Ernst Rauch, Chief Climate and Geo Scientist at Munich Re, and head of the Climate Solutions Unit, commented as follows on the figures:

“The 2021 disaster statistics are striking because some of the extreme weather events are of the kind that are likely to become more frequent or more severe as a result of climate change. Among these are severe storms in the USA, including in the winter half-year, or heavy rain followed by floods in Europe. For hurricanes, scientists anticipate that the proportion of severe storms and of storms with extreme rainfall will increase because of climate change. Even though events cannot automatically be attributed to climate change, analysis of the changes over decades provides plausible indications of a connection with the warming of the atmosphere and the oceans. Adapting to increasing risks due to climate change will be a challenge.”

In the Asia-Pacific region, losses remained modest. With overall economic losses of US$ 50bn, of which US$ 9bn were insured (insurance gap 83%), the region accounted for just 18% of overall losses and 7% of insured losses. The costliest disaster was a severe flood in Henan Province in central China, where countless rivers, including the Yellow River, burst their banks. Hundreds of thousands of homes were flooded. Overall losses came to some US$ 16.5bn, with only about 10% of these insured.

A 7.1-magnitude earthquake struck off the east coast of Japan on 13 February. The earthquake was not far from the epicentre of the Tohoku earthquake off Japan’s northeast coast, which ten years earlier had triggered a devastating tsunami that led to the Fukushima nuclear disaster. The latest earthquake caused substantial losses of US$ 7.7bn, with insured losses in the region of US$ 2.3bn (insurance gap: 70%).

Along with the earthquakes in Japan, several violent volcanic eruptions following a number of more peaceful years underlined the threats from geophysical catastrophes. In September, the Cumbre Vieja volcano in the south of La Palma in the Canary Islands erupted. Giant streams of lava flowed all the way to the sea. Some 3,000 properties were buried under lava streams and layers of volcanic ash. It was not until 25 December that the authorities were able to officially declare the eruption over. Losses are in the region of €850m (US$ 1bn). Only a small portion of this is likely to be insured.

On the Indonesian island of Java, the Mount Semeru volcano erupted in December. The event produced what are known as pyroclastic flows consisting of hot ash and rock at temperatures of around 1,000°C, which is why such eruptions are far more dangerous than those with lava flows. More than 50 people were killed.

Even in industrialised countries, there is still a large insurance gap

On a global level, around 57% of losses from natural catastrophes in 2021 were not insured. Those affected must bear the financial losses themselves, or rely on aid. This insurance gap has declined over the last few decades in industrialised countries, whereas in poorer countries it remains unchanged at over 90%.

In industrialised countries, the proportion of insured losses depends on the particular natural hazard concerned. For example, in the USA and Europe, insurance density is much lower for floods than for storms. Some infrastructure in the USA is insured, while this is seldom the case in Europe.

“Greater insurance density can help people and countries to better cope with the financial consequences of a disaster and help them return to a normal life. Developing concepts in partnership with governments (public-private partnerships) certainly makes sense,” explains Ernst Rauch.