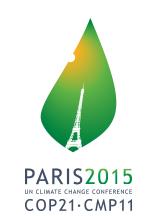 The United Nations Framework Convention on Climate Change (UNFCCC) was adopted in 1992 and has since been ratified by 195 Parties. The Kyoto Protocol was adopted in 1997 to implement the UNFCCC and entered into force in 2005. It laid down targets for the reduction or limitation of greenhouse gas emissions only in developed countries and transition economies. In 2007, the Parties initiated work aimed at drawing up a post-2012 climate agreement, applicable to all emitters of greenhouse gases.

The Copenhagen political accord of 2009, the Conferences of Cancun (2010), Durban (2011) and Doha (2012) laid the foundations of this new international regime, supplementing the existing instruments in the framework of the UNFCCC and the Kyoto Protocol. In 2011, the Parties affirmed their will to conclude this new climate agreement in 2015, with entry into force planned for 2020. In accordance with the internal rules of the UNFCCC, providing for an annual rotation by UN regional group, the hosting of the 2015 Summit should be provided by a Western European country.

In September 2012, French President François Hollande announced France’s candidacy to host this major event in 2015. It will be the 21st Conference of Parties to the UNFCCC and the 11th meeting of the Parties to the Kyoto Protocol. Laurent Fabius, Minister of Foreign Affairs, confirmed this candidacy during the Doha Conference in December 2012. It was endorsed by our regional group at the UN, the WEOG, on 12 April 2013, opening the way for official designation during the Warsaw COP in November 2013.

In order to prepare this Conference under the best conditions, France has chosen to hold it in Paris, at the Paris-Le Bourget site, which has the best hosting and accessibility capacities for official delegations, as well as civil society and the media, which are essential components of the Conference’s success.

France has chosen to make this Conference exemplary in terms of environmental impact. It will implement a programme of action aimed at keeping to a minimum the impact of the meeting in terms of consumption of natural resources (water, waste, energy) and greenhouse gas emissions.

The meeting will mark a decisive stage in negotiations on the future international agreement on a post-2020 regime, and will, as agreed in Durban, adopt the major outlines of that regime. By the end of the meeting, for the first time in over 20 years of UN negotiations, all the nations of the world, including the biggest emitters of greenhouse gases, will be bound by a universal agreement on climate. In order for the agreement to come into effect in 2020, at the end of the second commitment period of the Kyoto Protocol, subsequent COP meetings will work on finalising its details. The Presidency of the COP plays a vital role, not only during the actual COP meeting (in reality, a series of meetings held in parallel over a two-week period), but also in the organisation of a number of meetings held in preparation for the COP.

It is clear that the efforts being made to reduce greenhouse gas emissions are not enough to avoid the serious impacts of climate change, whether these are due to sporadic events (floods, storms) or gradual ones (rising sea levels, ocean acidification).

Urgent action must be taken, which is why these issues are now the focus of work under the United Nations Framework Convention on Climate Change (UNFCCC) and initiatives in the fields of risk and disaster management and humanitarian assistance.

Adaptation should be at the heart of the discussions leading to the Paris agreement, thus confirming crucial political importance, and should contribute to climate resilient development. This agreement could propose and catalyse the implementation of concrete solutions for the most vulnerable countries, especially via the Agenda of Solutions. If Parties so wish, they may include specific adaptation measures in their national contribution or communicate their needs and efforts through other existing channels.

PLEASE NOTE: CONTENT IS DISPLAYED AS LAST POSTED BY A PREVENTIONWEB COMMUNITY MEMBER OR EDITOR. THE VIEWS EXPRESSED THEREIN ARE NOT NECESSARILY THOSE OF UNDRR PREVENTIONWEB, OR ITS SPONSORS. See our terms of use