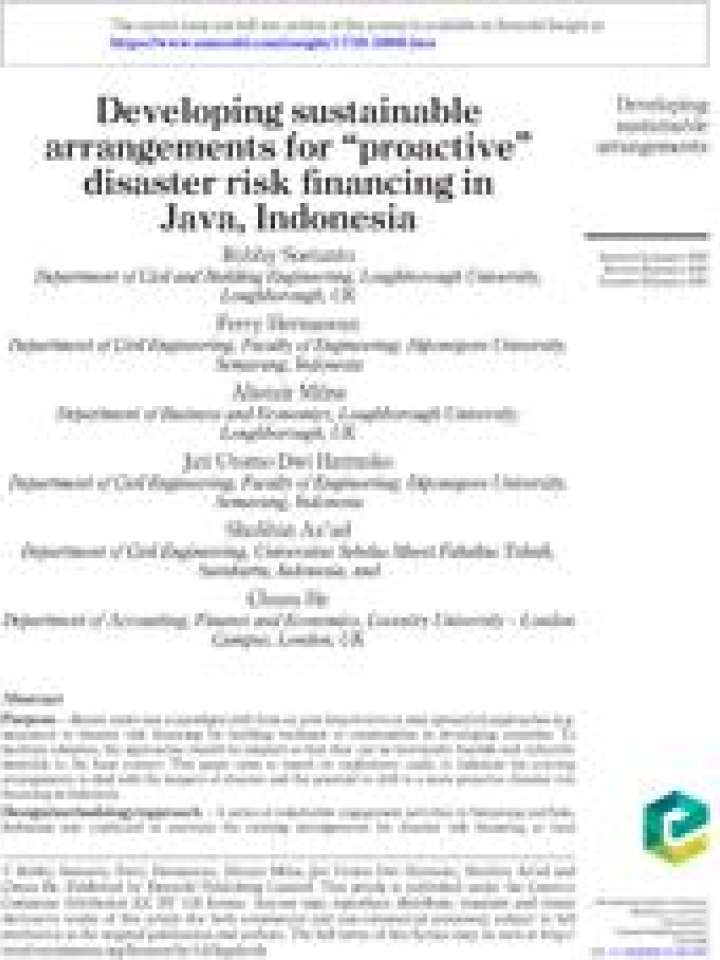 Recent years saw a paradigm shift from ex post (reactive) to ex ante (proactive) approaches (e.g. insurance) to disaster risk financing for building resilience of communities in developing countries. To facilitate adoption, the approaches should be adapted so that they can be technically feasible and culturally desirable to the local context. This paper aims to report an exploratory study to elaborate the existing arrangements to deal with the impacts of disaster and the potential to shift to a more proactive disaster risk financing in Indonesia.

A series of stakeholder engagement activities in Semarang and Solo, Indonesia was conducted to ascertain the existing arrangements for disaster risk financing at local government level, the challenges/barriers to the adoption of insurance, education and policies to facilitate the transformation from reactive to proactive process. Thematic analysis was applied to transcribed conversations during interviews, focus groups and workshops. Identification of emerging issues/themes was also guided by the researchers’ notes during the events, and facilitated by qualitative analysis software, Atlas Ti. This was complemented by an analysis of regulations and documents provided by the local stakeholders.

The local governments heavily rely on contingency fund, which is not enough and often significantly delayed to fund recovery and reconstruction of public infrastructure. The use of insurance is limited in both public and private sectors, particularly in the majority of low-income communities. Various barriers and challenges were identified under several categories, namely, institutional, cultural, affordability, lack of awareness and knowledge, insurance arrangement process and lack of trust. The findings also suggest that improving insurance education should involve multiple stakeholders, and both formal and informal routes should be pursued.

The research fills the gap of knowledge in disaster risk financing in the context of developing countries, specifically in local governments and communities in Indonesia. The findings may be replicable for other developing countries with low adoption of ex ante financial instruments for dealing with the impacts of disaster.