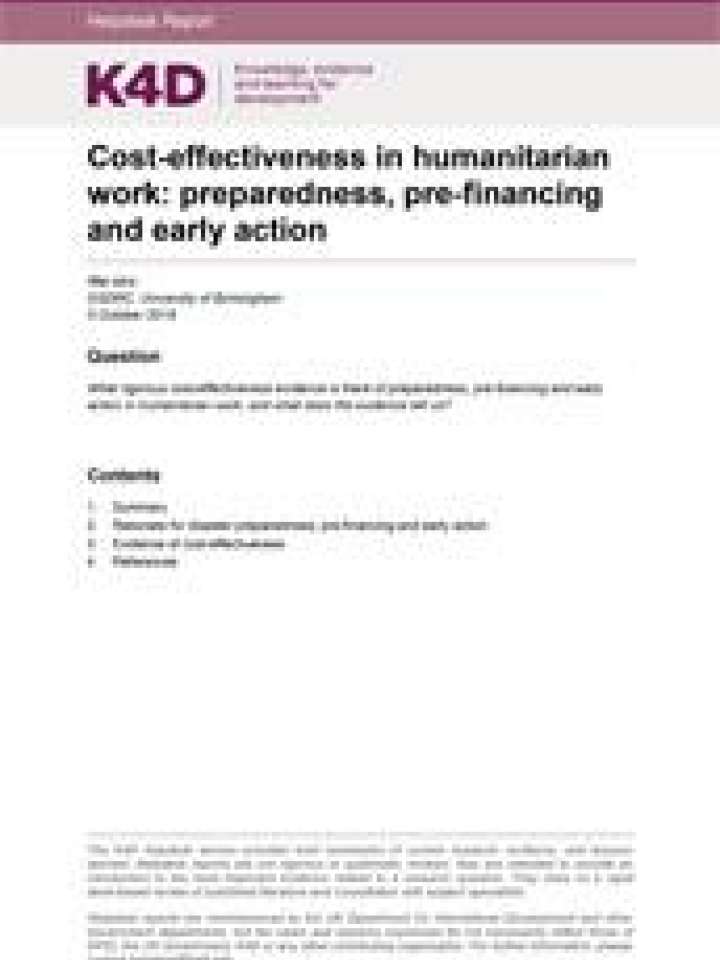 This review details the evidence from a number of studies of disaster preparedness impact, focusing on cost (and time) effectiveness. The literature reviewed was a mixture of academic papers and development agency reports published in 2013-2018.

Among the key findings, a study examining the economic case for investment in early response and resilience-building in disaster-prone regions of Kenya and Ethiopia concluded that early response was far more cost-effective than late humanitarian response. Secondly, a cost-benefit analysis of emergency preparedness in relation to drought and flood hazards in Niger found that the benefits of investing in preparedness far outweighed the costs. Meanwhile, a 2015 study by the Boston Consulting Group revealed that all the emergency preparedness investments examined saved significant time and/or costs in the event of an emergency. A 2016 report gives the findings of a Value for Money (VfM) assessment of UK Department for International Development (DFID) contingency funding, which was provided early in the 2015/2016 Ethiopia drought crisis, whereby timely procurement had helped DFID in saving 18%. A 2018 report gives the findings of a study of the return on investment (ROI) of DFID’s capacity development investments in Ethiopia and the Philippines, which yielded positive returns.

Overall, this review found that there was evidence for cost-effectiveness of disaster preparedness, pre-financing and early action, but there remains considerable potential to increase savings. The literature points to the need for greater research into the impact of different disaster preparedness investments – as well as greater allocation of resources for preparedness.