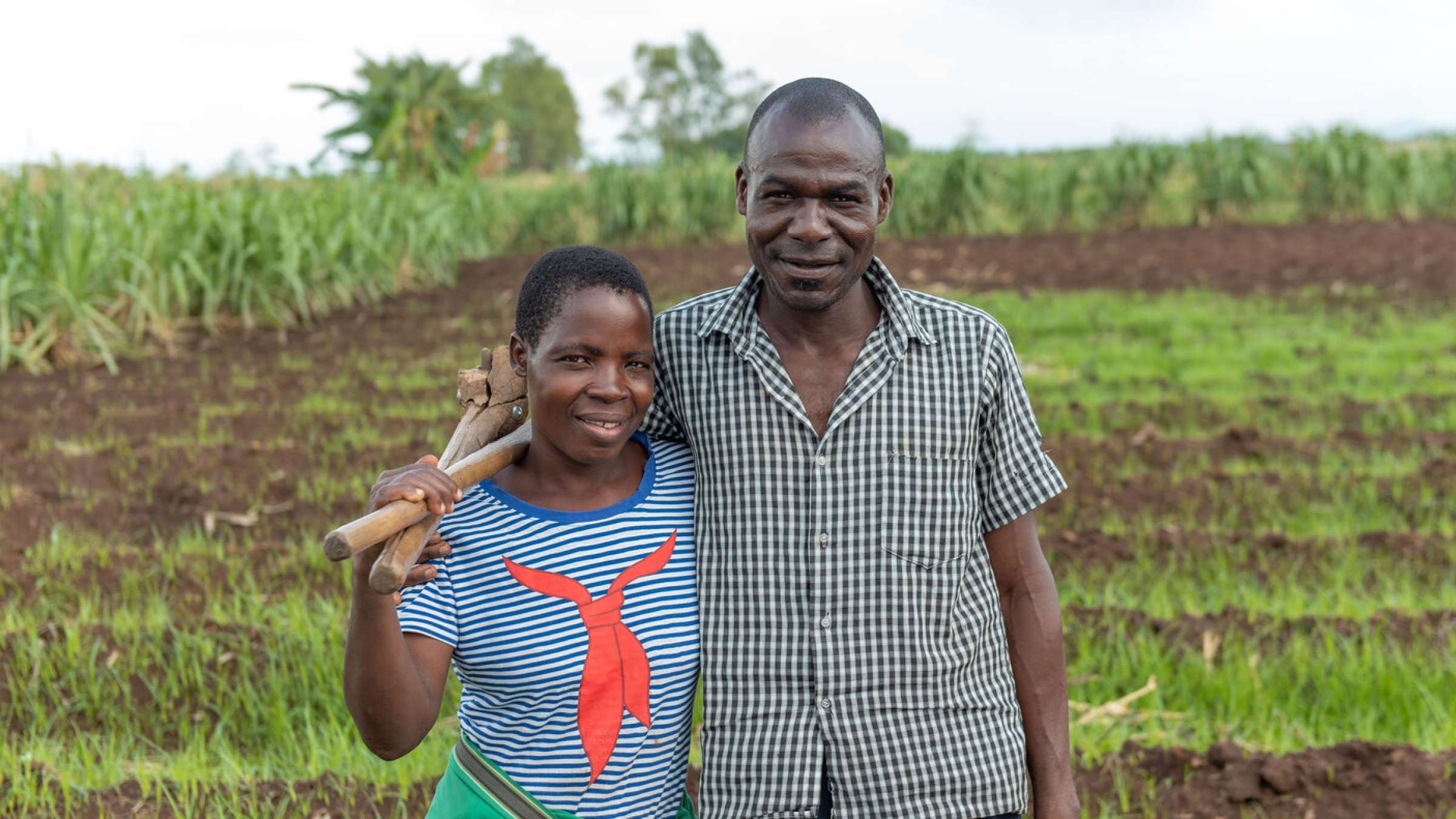 John Mphaya and his wife, Esinala Samuel Smiling to the camera while at their field
Nick Scarborough/GNDR

‘If someone is to stay with hunger it’s their choice now,’ John Mphaya says. It’s a bold statement from someone who only a few years ago lost his home, processions and only source of income during widespread floods. And the threat of those seasonal floodwaters hasn’t gone away.

John and his wife Esinala are maize farmers who live with their seven children in Magombo village at the foothills of Mount Mulanje in southern Malawi. In 2015 their village was hit by heavy rains and flooding after the bank of a nearby river burst. ‘Water filled the entire village,’ he says.

The floodwaters washed away their field of maize – their income – and destroyed their home. He and his family, along with neighbouring farmers, had to wait on the mountainside until the floodwater receded.

‘We came back here to rebuild our life,’ he says, referring to their return home. ‘That year I harvested a lot less than usual. I even failed to provide the necessary support for my children’s education. I opted to get into debt.’

The threat of floods remains but the community of farmers in Mulanje, including John and Esinala, have managed to reduce the risk they face and prevent another disaster. Not by preventing floods - but by reducing their vulnerability.

They have recently been part of an agriculture irrigation project supported by Plan Malawi. The community has built a weir on the river. This intervention controls the water flow, and channels and pipes irrigate each farmer's small patch of land.

The water improves the quality of the soil and enables John and Esinala to plant and harvest three times a year, instead of just once. They now reap up to 2,500 kg of maize annually – nearly double their previous yield. The maize has a market value of US$1,600, depending on prices and seasonal demand.

‘Things have changed for the better,’ Esinala says. ‘We no longer lack food. We are also able to take a portion of the harvest and sell it to cover other household spending.’

The additional income has allowed them to pay off the credit they took after the floods and replace their mud dwelling with a home made of bricks and mortar. The family are able to pay secondary school fees for their children. They have also acquired a small building where they can safely store grains for future consumption or sale.

Preventing floods is the next step. ‘As people we can implement manmade solutions to help change the situation,’ John says, ‘because if floods are happening it is due to deforestation, soil erosion and land degradation.’ The community plans to undertake agroforestry next and build the capacity of farmers to protect their land.

Until then, floods may return, but John and his family are now more resilient - their home will not be washed away, and they have savings and stored grains to sustain themselves. ‘Problems will always be there, but life is better now,’ he says. ‘Life has transformed.’