How do we ensure that disaster preparedness messages reach all their intended audiences? How do we account for the needs of elderly people, children, people with chronic health conditions or disabilities for whom specific information could be very useful in emergencies and disasters? These are some of the questions the Turkish Search and Rescue Association (AKUT) sought to answer, as it undertook an innovative field action in Istanbul as part of the European Disasters in Urban Centers Project (EDUCEN) [1].

The public awareness raising activity has become pivotal in the recognition of the issue of disability for AKUT. The volunteer trainers indeed realised that they were unable to answer questions from participants with disabilities about their special needs in disasters. AKUT volunteers thus challenged the “universality” of the disaster preparedness messages that they were disseminating.

For AKUT, the EDUCEN Project presented a unique opportunity to tackle this issue. The idea was to integrate the experiences, knowledge and skills of people with disabilities into the training content, as well as to detect any cultural pattern specific to different disability groups that could be instrumental in increasing their resilience. Naturally, this aim required the design and implementation of a collaborative, inclusive field action. In partnership with six NGOs, we reviewed the existing training modules and modify their content and format. Specific information concerning people with disabilities was added to it, thanks to feedbacks from our partners. The slideshow, as the core training material, has been simplified and multimedia adaptations such as audio descriptions, subtitles and sign-language translation videos, have been added. AKUT’s dissemination materials -notably, its disaster awareness booklet- have also been redesigned and made available online (including an audio version and a sign-language video version) for remote access.

As we progressed in the renewal of the training, we noticed that simplification and accessibility modifications have made our materials more useful not only for persons with disabilities, but also for children, the elderly, persons with minor sight or hearing impairments and persons with a low level of literacy. In other words, we had intuitively adopted the “universal design” concept, which perfectly suited our guiding principles: Ensuring maximum inclusiveness possible, supporting participation and promoting diversity. The accessibility solutions used in the new version of AKUT’s training presentation allows now the latter to be received by a larger and more diverse audience together, including people with disabilities [3].

We believe that the EDUCEN Project Istanbul Case Study has gone beyond a mere technical adaptation project and became essentially a learning process for AKUT on disability, and the lessons we have drawn are as important as the technical side of the action. To mention some:

We invite you to discover the details of the EDUCEN Istanbul Case Study (received “public service award” from the Accessible IT Platform of Turkey in May 2017) in the case study report and also to explore EDUCEN Handbook of Culture and Urban Disaster. 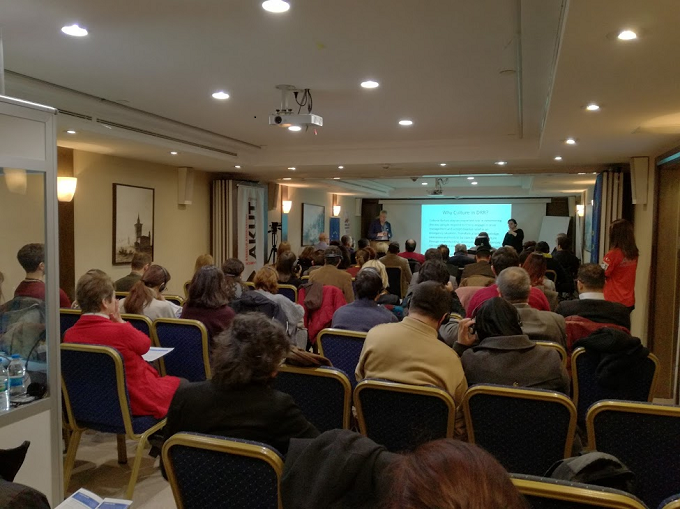 [2] AKUT’s seminar unit has undergone an important renewal in 2009, which increased its performance to an unprecedented level from 2010 onwards. 2012 has been a “record” year in terms of number of reached persons with 112.542 people in total. This figure has remained above 50.000 since then, which is a considerable achievement for a non-profit NGO.

[3] In fact, our initial idea was to develop dedicated training modules for different disability groups. This option was discarded when one our partners rightly reminded us that such a design would isolate the participants with disabilities and lead to exclusion.

Caglar Akgungor has graduated from the Department of Political Sciences and Public Administration at Galatasaray University, Istanbul, Turkey. He holds a MA and a PhD degree in Political Science from the Grenoble Institute of Political Studies, University of Grenoble, France. His main research interests lie in the social and political dimensions of risk and disaster issues, risk perception, decision making and public policy making regarding emergencies and extreme events. Author of various scientific publications, including the first disaster sociology study of Turkey, Akgüngör works as a consultant on disaster management; he also teaches at Galatasaray University. Dr. Akgungor has led the development of an inclusive, disability-adapted public disaster training program in EDUCEN Project as the Istanbul Case Study coordinator, and currently focuses on diversity and disability in disaster risk management.