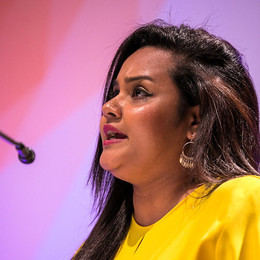 Originally from Sri Lanka, Ms. Jayathma Wickramanayake was appointed as the UN Secretary-General’s Envoy on Youth in June 2017 at the age of 26. She is the youngest senior official in the UN and the first woman to hold this position. In this role, Jayathma works to expand the UN’s youth engagement and advocacy efforts across all four pillars of work – sustainable development, human rights, peace and security and humanitarian action – and serves as a representative of and advisor to the Secretary-General.

On the 25th of April, Cyclone Kenneth hit Mozambique at its peak intensity. It killed more than 600 people and displaced thousands.

Just 6 weeks earlier, on the 14th of March, Cyclone Idai hit Mozambique at its peak intensity. It left 175,000 people displaced, and 3 million in need, with countless lives shattered by the loss of loved ones and livelihoods.

All of this happened in less than two months just this year, in 2019. It is the first time in known history that Mozambique has been hit by two deadly cyclones in just one season. The country had not experienced a storm like Kenneth in 60 years – with winds gusting up to 174mph.

Mozambique is just one such example. In the last 10 years, one quarter of humanity (1.7 billion people!) has been affected by disasters.

Disasters are happening all over the world right now. Human activities play a role in the frequency and severity of disasters. They are devastating and terrifying. Tragically, the number of these disasters is expected to rise, increasing the number of people affected – including young people. Disasters not only take the form of violent phenomena; simple changes such as a different rain pattern, wind or drought, can have a dramatic effect on people and societies.

Growing up in Sri Lanka, I learnt this the hard way. In my country, people depend on rainfed agriculture. If rain did not come at the right time, farmers could not produce enough crops to feed their families and some even took their own lives, unable to deal with the trauma of not having a livelihood. In 2004, when we were on school holidays, the Indian Ocean Tsunami struck my country, costing the lives of thousands of people and leaving hundreds missing, still to date. Unfortunately, I witnessed this personally.

Over the years, I met so many young people with similar stories. They had lived through cyclones, hurricanes, burnt forests, tsunamis, floods, earthquakes, tornadoes. For the same young people, and many more inspired by these stories, fighting climate change and building resilience is a personal fight. Young people are not only disproportionately affected by the impact of disasters, they are always among the first responders in emergencies. They are there, helping their communities, even before official help arrives. They dig, pull, protect, and save.

Young people’s resilience and resourcefulness in times of crisis is too often forgotten. With their ideas, energy and ingenuity to develop new and innovative solutions, young people have the power to improve emergency response at all levels and help build durable solutions for their communities.

Today 1.8 billion people in the world are between the ages of 10-24 years. This is the largest and most interconnected generation in history. This translates into unbelievable untapped potential.

Young people are already contributing to disaster management. For example, the Young Scientists Platform for DRR is increasing awareness among young scientists to use their research to support the Sendai Framework implementation, by contributing to an enhanced understanding of disaster risk. In places such as Kerala and Niger, youth are creating innovative mobile phone applications to strengthen disaster preparedness in their communities.

Engaging with young people is natural and necessary as it only improves our efforts to build the society’s resilience and reduce the risks of disasters - not to mention that it is young people’s right to be listened to and given the chance to contribute directly and to shape their own future.

As we witness an unprecedented global youth mobilization for climate action, it is important that world leaders listen to young people. During this year’s ECOSOC Youth Forum, more than 900 young people from 134 countries gathered at the United Nations in New York for a dialogue with United Nations Member States and partners, where they shared ideas on how to advance the 2030 Agenda for Sustainable Development.

Youth are the experts on issues that affect them. I will continue to create spaces for young people to get rightfully involved in decision-making processes, and advocate for greater investments in building young people’s capacities and resilience, especially in dealing with Disaster Risk Reduction and Humanitarian Action as outlined in the Global Compact for Young People in Humanitarian Action.

We need to meaningfully engage young people as equal partners rather than beneficiaries of programs they have no input in creating. Just recently, I joined experts at the 6th Session of the Global Platform for Disaster Risk Reduction, to discuss DRR under the theme, ‘Resilience Dividend: Towards Sustainable and Inclusive Societies’. I reminded leaders that young people are calling for actions to address the climate crisis. Let us not let their call become a missed call.

The role of youth in urban resilience

Actions for children and youth resilience: Guide for governments