How long must communities in disaster prone areas remain hopeful? 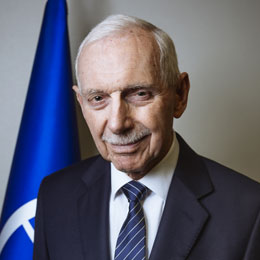 Ambassador William Lacy Swing of the United States has been Director General of the International Organization for Migration since 2008. From May 2003 till January 2008, as UN Special Representative of the Secretary- General (SRSG) for the Democratic Republic of the Congo (DRC), Ambassador Swing successfully led all facets of the largest UN peacekeeping operation in history. Before his appointment to the DRC and since November 2001, Ambassador Swing was the Special Representative of the Secretary-General for Western Sahara and Chief of Mission, United Nations Mission for the Referendum in Western Sahara (MINURSO). William Lacy Swing’s diplomatic career has spanned some forty years including six postings as Ambassador.

2015 was the year of hope for the global migration and humanitarian communities.

That year, we saw the 2030 Agenda on Sustainable Development call for effective measures and strengthened support to empower displaced people and migrants as part of a broader commitment “to leave no one behind”. This was important progress on the Millennium Development Goals which had nothing to say about migration, let alone the contribution it can make to resilience or sustainable development.

Also in 2015, the world came together to agree to the Sendai Framework for Disaster Risk Reduction, which set out core commitments to substantially reduce disaster risk, loss of lives and livelihoods, and improve health. Now part of the development architecture built around the 2030 Agenda, the Sendai Framework is the first global agreement on disaster risk reduction to incorporate clear references to mobility and displacement. The core commitments not only recognize displacement as a principal consequence of disaster, they also acknowledge the important contributions that migrants make – through remittances, networks, skills and investments – to risk-reduction and resilience-building.

In December of that very same year at the Paris Climate Conference (COP21), 195 countries adopted for the first time ever a universal, legally binding global climate deal. This was long-awaited progress. Importantly, the Paris Agreement recognizes the need to protect vulnerable populations, including migrants, and establishes a dedicated task force to advance strategies that avert, minimize and address displacement related to climate change.

Three historic agreements – showing the true power of international cooperation – which together reflect the hopes of a global community aspiring towards a sustainable, safer and more prosperous future for all.

This week, the Global Platform for Disaster Risk Reduction is once again bringing together governments and international and local groups to review progress made so far in taking forward one of our beacons of hope from 2015: the Sendai Framework. It is remarkable that the meeting is taking place in Cancún, Mexico, where the links between human mobility and climate change were first acknowledged through the Cancun Adaptation Framework in 2010.

While significant progress was made in 2015, intentions must now be turned into concrete actions to fulfil the commitments we made as an international community.

I have no doubt that we could easily find ourselves back where we started before 2015, or even before 2010, if we do not seize the opportunity that this global forum of leaders presents to move from commitment to action. It is now essential that we act collectively to reduce risk and build resilience based on the recognition of the important role that human mobility plays for inclusive growth, sustainable development, resilience-building and, especially, for disaster risk reduction.

Mass displacement continues to be one of the most visible consequences of disasters. The hope we felt in 2015 can be contrasted with the profound suffering of the 19.2 million people newly displaced by natural  disasters in 113 countries that year. This was more than twice the number of those displaced by conflict and violence in that same year. As numbers grow and solutions seem to be more and more elusive, it is now more urgent than ever to intensify our joint efforts to build the resilience of vulnerable communities to disasters and displacement.

The UN Migration Agency (IOM) is playing its part by launching a Strategic Work Plan on Disaster Risk Reduction, which is aligned with the UN Plan of Action. Since the Sendai Framework, IOM has been working on Disaster Risk Reduction in 26 countries. Partnerships are essential to reducing risk; partnerships with local governments, local organizations, but, most importantly, with displaced people, migrants and communities at risk. We will never be fully successful unless it is the communities themselves that take the lead in crafting strategies that reduce their own risk and build resilience.

People living in disaster-prone areas are already playing their part. In Myanmar, Mozambique and the Philippines, we have built communities' disaster preparedness as the global lead agency  on Camp Coordination and Camp Management for natural disasters. In Pakistan, Vanuatu, Nepal, Rwanda and Timor Leste, we have assisted thousands of households in recovering from disasters by rebuilding stronger houses, restoring infrastructure and supporting livelihoods. We are also working with communities to prevent new risks in countries such as Indonesia, Afghanistan and Micronesia.

We know mobility can save lives, enhance resilience and reduce risks; but mobility can also lead to vulnerabilities. As we witness widespread suffering in drought-stricken East Africa and nearby regions, we must ensure that our disaster risk reduction efforts take account of human mobility both as an acute impact on vulnerable populations and as an adaptive strategy for resilience.

I am not sure how much longer we can ask disaster-prone communities to remain hopeful that change is coming. They should not have to wait any longer.

It is time to implement the commitments made in 2015.