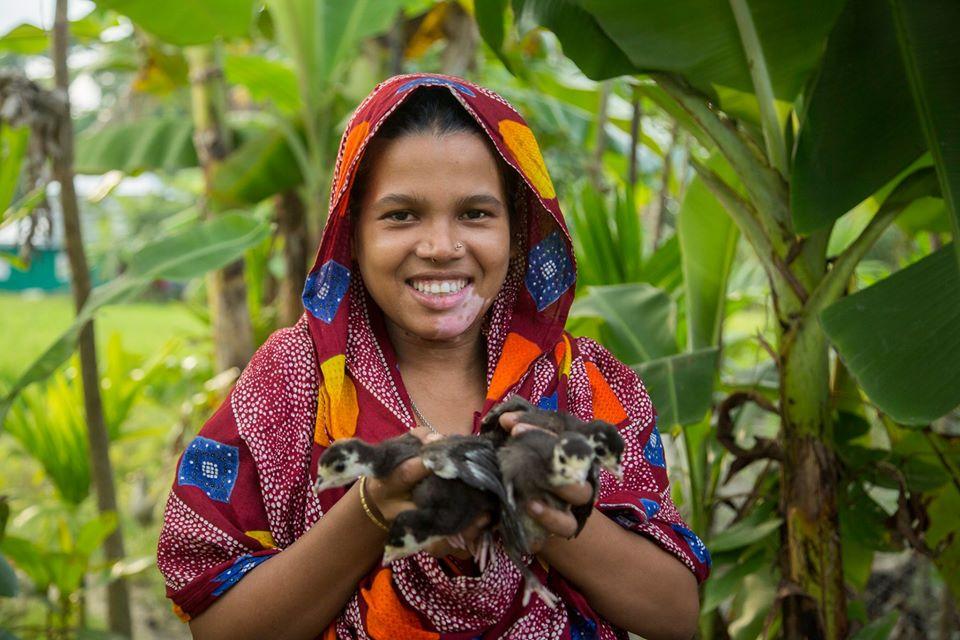 Rangu Debi, 70, lives on Monpura, an isolated island of Bhola district in Bangladesh, surrounded by Meghna River. A widow with six children, she has seen many cyclones and floods in her lifetime, some of them catastrophic. Fifty years ago, Cyclone Bhola’s flood waters took everything from her, including one of her daughters. Since then she has been living in a government shelter.

Her story is not uncommon.

MILLIONS OF LIVES IN THE BALANCE

A densely populated low-lying country dominated by deltaic floodplains, Bangladesh is exceptionally vulnerable to the impacts of climate change.

Each year increasingly powerful storms fueled by warmer waters in the Bay of Bengal batter the coast, inundating farmland, damaging houses and sweeping away lives and livelihoods.

Meanwhile, rising sea levels are driving a slow onset disaster in salinisation. More frequent floods and droughts are on the horizon.

Those able to migrate away from hazard-prone areas have done so, while the poorest have been left behind. With precarious housing, tenuous livelihoods and nowhere to go when disaster strikes, they are left highly vulnerable.

Hundreds of millions of lives hang in the balance.

To address the challenges, the United Nations Development Programme has been supporting Bangladesh to access global finance and to implement both a range of interlinked initiatives, from advancing adaptation planning and budgeting and tracking domestic climate finance, to resilience building, to reducing emissions from fossil fuel-based power and advancing the country’s REDD+ Readiness Roadmap.

One project has taken a community-led, ecosystems-based approach to adaptation, working with nature to enhance food security, improve livelihoods and reduce disaster risk.

Since 2015, with the backing of the Global Environment Facility-Least Developed Countries Fund, Bangladesh’s Forest Department and UNDP have been working with eight coastal Upazila (sub-districts) in the highly vulnerable districts of Bhola, Barguna, Patuakhali, Noakhali and Pirojpur.

By offering families more resilient, sustainable livelihoods, the project is helping families put food on the table and boost their incomes, while also reducing pressure on forests.

A further 140 households have been introduced to innovative ecosystem-based farming models, including the award-winning ‘Forest-Fruit- Fish and Vegetable (3FV)’ model, implemented in 28 hectares of degraded forest land.

Living on the isolated island of Char Jahir Uddin in Bhola district, Razia Begum received support in adopting a ‘Forest-Fruit- Fish and Vegetable (3FV)’ model of farming. As a result, she now feeds her family and earns over US$2,000 selling her fruit, vegetables, fish and eggs each month.

While most coastal crops were destroyed by Cyclone Amphan in May 2020, floating gardens planted under the project’s ‘2FVD’ model (Fish, Fruit, Vegetables and Duck Farming) withstood the super storm by rising with the water.

To regulate drainage and protect agricultural fields from saline water intrusion, the project has also been excavating 2.9 kilometres of canals and renovating sluice gates. Around 500,000 households in Bhola have seen improved agricultural production as a result.

The project has constructed six raised earthen platforms ('killa'), with the capacity to shelter approximately 15,000 livestock during disasters.

Restoring and nurturing mangrove forests – considered a first line of defence against climate disasters – has been at the core of the ICBA-AR project.

Since its inception, more than 572,000 seedlings of 12 climate-resilient species have been raised in its nurseries.

The project has also worked to expand the diversity of species in 650 hectares of previously mono-culture plantations, also developing an assessment plan to determine the effectiveness of diversification.

Co-management committees have been formed in all 8 Upazila under the project, supporting forest protection and resources management, and facilitating dialogue between communities and local government.

Members of the FRPGs act as stewards of the forest, including patrolling with the Forest Department and raising awareness against illegal tree felling.

Ultimately the ICBA-AR Project has recognised communities not simply as victims of climate change, but as critical partners for finding and sustaining adaptation solutions.

Finally, with disasters looming large over communities, the project has also been focused on enhancing local early warning capacity.

In support of the government’s Cyclone Preparedness Programme, the project has distributed microphones, hand sirens, signal flags, jackets and motorcycles to local institutions.

Eight female community watchers have been appointed to work closely with households to empower women and facilitate the adoption of climate-resilient livelihoods.

Volunteers and staff are now working to raise awareness among coastal islanders about the prevention of COVID-19.

The ICBA-AR project is now focused on replicating the Forest-Fruit-Fish-Vegetable (3FV) model at the homestead level; developing an agreement between the Forest Department and Forest Resource Protection Groups for forest conservation; and further construction of ‘killa’ for protecting livestock during cyclones and storm surges. A climate adaptation learning centre is under implementation at local level, to be linked to a forthcoming regional adaptation centre in Dhaka.

As well as continuing to support the uptake of more resilient livelihoods, the project is turning to other adaptation initiatives such as improved cooking stoves, ‘climate-proofed’ tube wells, rainwater harvesting, and solar power in rehabilitated villages for climate refugees.

Meanwhile, with finance from the global Green Climate Fund, UNDP is now helping Bangladesh implement an innovative new project building the resilience of women and children in the coastal districts of Satkira and Khulna. Launched in 2019, the six-year project will address drinking water; empowering communities with new livelihoods; and improving early warning systems.

A project working with communities living on small islands and riverine charland islands has also begun with the backing of the Adaptation Fund. An estimated 341,000 people living on chars in Rangpur and Bhola are expected to benefit from cyclone and flood-resistant homes, enhanced livelihoods, and improved disaster preparedness and early warning.

For its policy initiatives and on-the-ground implementation, Bangladesh has become a role model to other countries for climate action.

Innovative participatory projects such as ICBA-AR are showing how local communities can play a leading role in both adaptation and mitigation.

Work continues. The challenges remain as great as ever.

Community based adaptation in action: a case study from Bangladesh