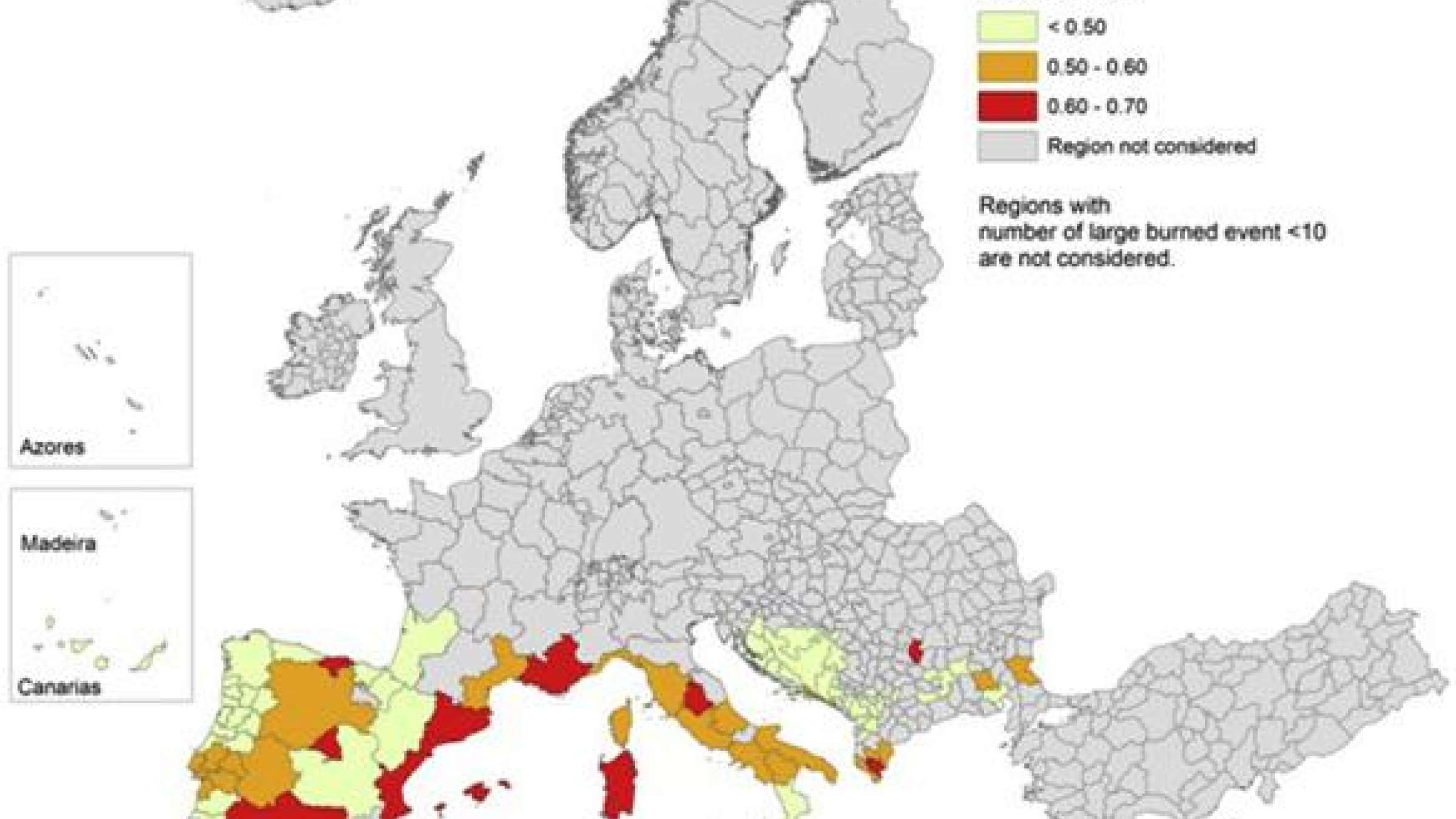 Density of the wildland-urban interface areas in administrative regions across Europe, showing regions where unmanaged land is dangerously close to cities, posing a potential fire risk. University of Leicester

An international research team has put together a map using satellite data that details the countries in Europe with the highest likelihood of experiencing wildfire damage - with large fires occurring more frequently near Wildland-Urban Interface areas in the countries of Albania, Bulgaria, Cyprus, France, Italy and Spain.The map is published in the Journal of Environmental Management and is the first European-scale map of wildland/urban areas.

For the first time, the researchers set out to map the extent ofi wildland areas around cities all over Europe to find out where they create a risk for large wildfires threatening people.

Using satellite maps of land cover and of the extent of large fires, they used statistics to find areas where large fires have happened more frequently and where wildland areas are close enough to cities to make them vulnerable.

The distance from the nearest wildland/urban areas explained the occurrence of large fires in many regions across Southern Europe, where fires are the biggest problem.

Professor Heiko Balzter, Director of the Centre for Landscape and Climate Research at the University of Leicester, said: “In the regions we have identified as high-risk, local authorities need to prioritise fire risk control and develop better forest fire risk management strategies.

“This study was exciting, especially when we had our Eureka moment as it became clear that were onto something. We did not know what to expect when we started this work. To map the extent of wildland/urban areas all across Europe was already quite new. But to find that we can use that map to predict fire risk was a real breakthrough.”

WUI mapping and the cross-national scale statistical analysis between WUI distance and large forest fires were performed for the whole study area.

Amongst the included countries, forest fires are strongly concentrated in the Mediterranean countries.

Dr Beth Cole from the University of Leicester’s Centre for Landscape and Climate Research, a co-author of the study, added: “A European wide approach to mapping the interface of wildland and urban areas has really allowed us to see the relationship between land cover and fire risk at a continental scale. This opens up a great opportunity for land management practices to reduce the risk of costly and dangerous wildfires in these populated areas.”

In many regions of Europe the rapid changes in the global economy have led to dramatic changes in land use.

Many farmers have given up production and shrubs encroach on abandoned land and these changes have altered the landscapes around many large cities, particularly in the Mediterranean.

Where such wildland areas meet the city boundaries, wildfires are a serious risk. This is especially the case in Southern Europe where summers can be hot and dry.

Such conditions lead to sometimes catastrophic wildfires resulting in the loss of human lives and damage to property.

Wildland areas around cities are landscapes where urban land use makes people and properties very vulnerable to disasters and at the same time woody plants act as fuel for massive fires.

With the recent extreme weather in Europe such fires have been called ‘mega-fires’ by researchers.

They can be self-fanning, some have fire tornadoes throwing embers high up into the air and spreading themselves across vast landscape very quickly. They are notoriously difficult to extinguish and are feared by many fire-fighters.

Dr Sirio Modugno, researcher from the University of Cassino and Southern Lazio, lead author of the study and an Honorary Visiting Fellow at the Centre for Landscape and Climate Research of the University of Leicester, said: “The land cover use well reflects the interaction between human activity and the surrounding environment. The increase of wildland urban interface areas, with the associated forest fire risk, could be interpreted like an intrusion of the urban model in the wild areas. The rural abandonment, the touristic pressure and the urban sprawl have determined an increase of contact between urban and wildland areas.

“This study highlights the importance of the geographic data availability. The presence of a homogeneous and standardized European database supports the environmental analysis. The use of digital cartography and the viable production of thematic maps opens several possibilities not only to the scientific research sector but to territorial operators involved in planning actions too”.

Dr Paquale Borrelli from the European Commission’s Joint Research Centre in Ispra, added: “Wise land management can provide a valuable ecosystem service of fire risk reduction that is currently not explicitly included in ecosystem service valuations. The results reemphasise the importance of including this ecosystem service in landscape valuations to account for the significant landscape function of reducing the risk of catastrophic large fires.”