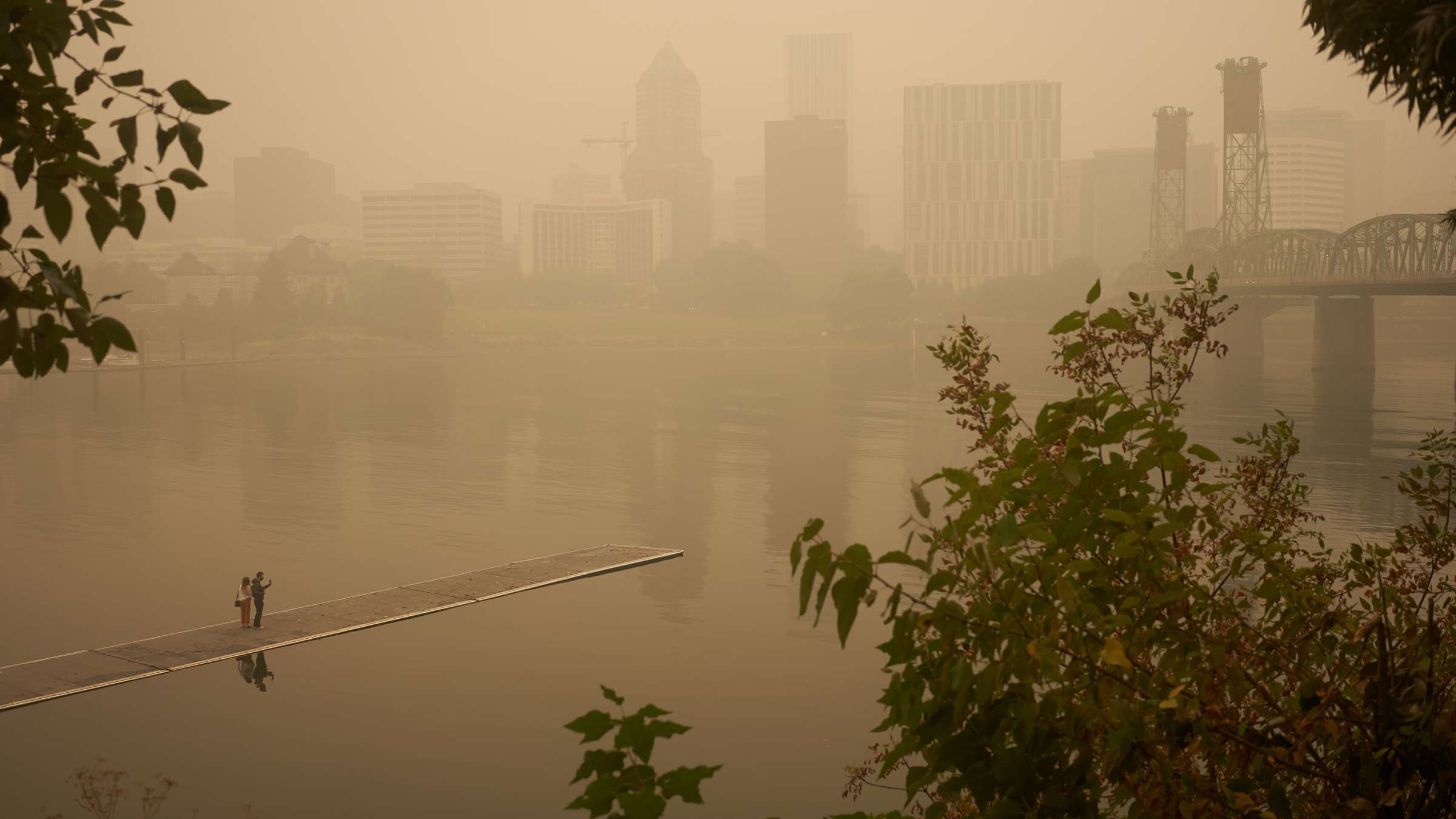 Portland, OR, USA - Sep 12, 2020: An orange smoke-filled sky is seen above Portland's downtown skyline on Saturday afternoon during the Oregon wildfires.
Tada Images/Shutterstock

Over the last year, Covid-19 lockdowns brought blue skies to the most polluted regions of the globe, while wildfires exacerbated by a drier and hotter climate sent smoke to the normally clean skies of cities thousands of miles away. The conflicting events offer two visions of the future. The difference between those futures lies in policies to reduce fossil fuels.

New data from the Air Quality Life Index (AQLI) underscores the health threat of a world without policy action. Unless global particulate air pollution is reduced to meet the World Health Organization’s (WHO) guideline, the average person is set to lose 2.2 years off their lives. Residents of the most polluted areas of the world could see their lives cut short by 5 years or more. Working unseen inside the human body, particulate pollution has a more devastating impact on life expectancy than communicable diseases like tuberculosis and HIV/AIDS, behavioral killers like cigarette smoking, and even war.

“During a truly unprecedented year where some people accustomed to breathing dirty air experienced clean air and others accustomed to clean air saw their air dirty, it became acutely apparent the important role policy has played and could play in reducing fossil fuels that contribute both to local air pollution and climate change,” says Michael Greenstone, the Milton Friedman Distinguished Service Professor in Economics and creator of the AQLI along with colleagues at the Energy Policy Institute at the University of Chicago (EPIC). “The AQLI demonstrates the benefits these policies could bring to improve our health and lengthen our lives.”

China is an important model showing that policy can produce sharp reductions in pollution in short order. Since the country began its “war against pollution” in 2013, China has reduced its particulate pollution by 29 percent—making up three-quarters of the reductions in air pollution across the world. As a result, China’s people have added about 1.5 years onto their lives, assuming these reductions are sustained. To put China’s success into context, it took several decades and recessions for the United States and Europe to achieve the same pollution reductions that China was able to accomplish in 6 years.

China’s success demonstrates that progress is possible, even in the world’s most polluted countries. In South Asia, the AQLI data reveal that the average person would live more than 5 years longer if pollution were reduced to meet the WHO guideline. The benefits of clean air policies are even greater in the region’s pollution hotspots, like Northern India where 480 million people breathe pollution levels that are 10 times worse than those found anywhere else in the world.

In Southeast Asia, air pollution is emerging as a major threat in metropolises like Bangkok, Ho Chi Minh City and Jakarta. The average resident in these cities stands to gain 2 to 5 years of life expectancy if pollution levels were reined in to meet the WHO guideline. At the same time, in Central and West Africa, the effects of particulate pollution on life expectancy are comparable to those of well-known threats like HIV/AIDS and malaria yet receive far less attention. For example, in the Niger Delta area, the average resident is on track to lose nearly 5 years of life expectancy if pollution trends continue.

“The events of the past year remind us that air pollution is not a problem that developing countries alone must solve,” says Ken Lee, the director of the AQLI. “Fossil-fuel driven air pollution is a global problem that requires strong policies at every front—including from the world climate negotiators who are meeting in the coming months. The AQLI’s latest data provides leaders and citizens alike with the justification for strong clean air policies in the form of longer lives.”