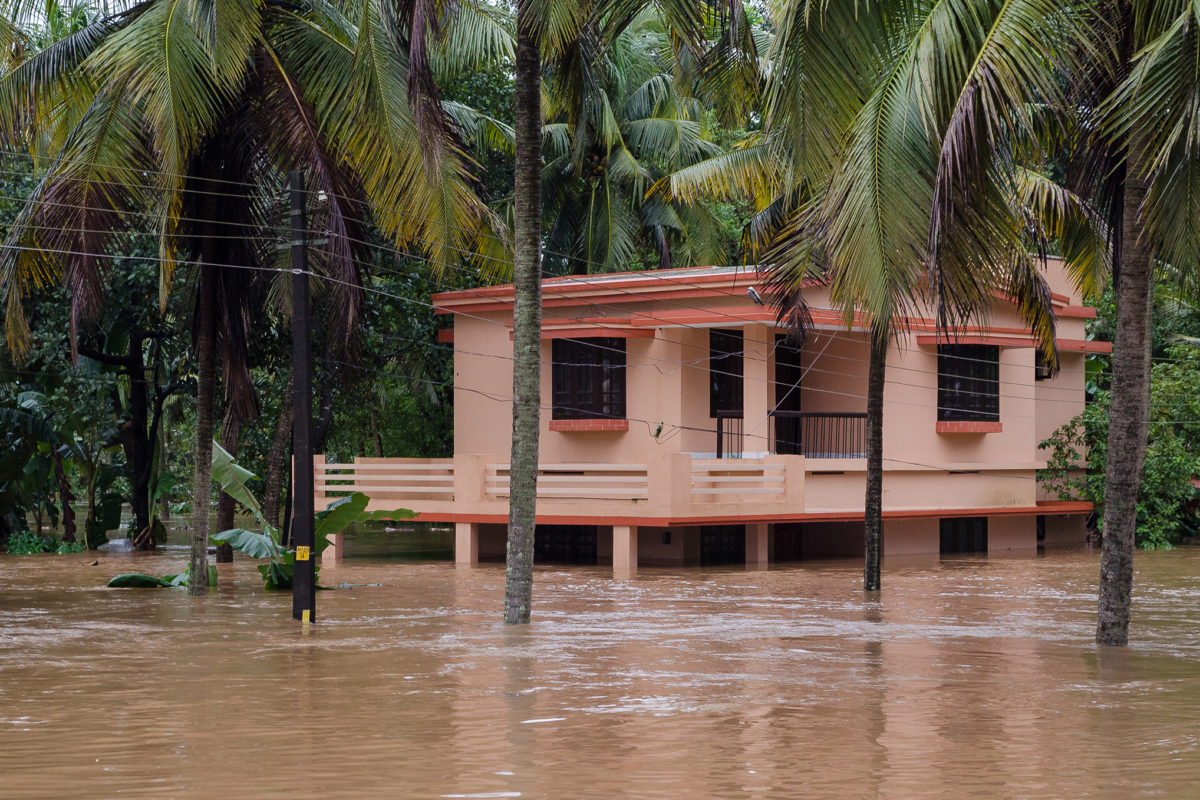 A home that flooded in Kerala in 2018. Photo by Dilshad Roshan/Wikimedia Commons
.
By Sahana Ghosh

An analysis of deaths from extreme weather events (EWE) in India in the past 50 years has revealed that though tropical cyclones were the least frequent event, they caused 28.6 percent of the mortalities, second only to floods responsible for maximum human deaths. Floods and tropical cyclones contribute almost 75 percent to the total mortalities per year due to EWEs. But heatwaves and lightning are gaining importance, according to the analysis by scientists at India’s Ministry of Earth Sciences (MoES), Mahalanobis National Crop Forecast Centre, and School of Environmental Science, Jawaharlal Nehru University.

The researchers underscore a steep rise in EWEs, except for tropical cyclones, adding that despite a decrease in the mortality rate (mortalities per year per million population) over the 50 years due to better disaster management and improved early warning and weather forecasts, the events lead to massive economic losses. “The trend of a sharp rise in EWE in the last few decades is principally attributed to climate change,” M. Rajeevan, secretary, MoES, and co-author of the study, told Mongabay-India. “State disaster management agencies can harness the data to devise specific strategies. States such as Gujarat and Odisha do have robust systems, but many don’t, so the study offers insights on prioritising and improving action plans,” added Rajeevan.

“Although efficient disaster management and early warning systems have reduced the mortality associated with extreme weather events, better awareness campaigns amongst the vulnerable sectors of society may further reduce it. The impacts of weather extremes are also unequal in different parts of the country, due to variation in vulnerability,” study co-author Kamaljit Ray, a senior scientist in the MoES, told Mongabay-India.

For example, the low-income population, working as labourers in open fields and construction sites, are more vulnerable to heat strokes and lightning as compared to other people working in a closed environment, said Ray.

In the past 50 years (1970–2019), a total of 7063 EWEs associated with at least one mortality occurred in the country. These 7063 events caused 141,308 deaths, with an average of 20 deaths per event, authors write in the study. Odisha, Andhra Pradesh, Assam, Bihar, Kerala, and Maharashtra, with high populations, had the maximum mortality rates due to EWEs in the last two decades. The analysis underscored a need to consider these states with priority for developing disaster management action plans. Ray has earlier highlighted the need to critically analyse some of the recent disastrous floods (Uttarakhand in 2013, Srinagar in 2014, Chennai in 2015, and Gujarat in 2017) for policy planning and better disaster management.

As per EM-DAT, the international disasters database, (which records data for an event if ten or more mortalities are reported), the total estimated damages due to these EWEs in India are equivalent to 99 billion USD (over seven trillion rupees) in the past 50 years. Out of this, floods were responsible for damages worth 60 billion USD, and tropical cyclones caused damages worth 22 billion USD. Extreme temperatures and lightning were accountable for the remaining 17 billion USD.

Researchers also note the increase of EWEs in low-risk areas rendering them vulnerable to multiple events. “There is a nexus between various extremes and their impacts with respect to the geographical location of a particular area. In general, coastal areas are prone to tropical cyclones and interiors to temperature extremes but an increase of these extreme weather events in low-risk areas make those areas more vulnerable to multiple extremes. For e.g., in the last two decades, mortality due to heat waves and lightning events has increased in coastal states like Odisha and Andhra Pradesh,” explained Ray. According to the study, mortality rates due to lightning have increased in most vulnerable states, with the highest increase of 61 percent in Odisha in the last two decades. The researchers also state the limitations: non-inclusion of indirect and delayed mortality due to extreme weather, underreporting of deaths, and lower level of death registration, and low density of observation network in some states.

Climate scientist Roxy Mathew Koll at the Indian Institute of Tropical Meteorology, who was not involved in the analysis, said the study is a starting point for focusing on the regions that show multiple extremes. “This can be the starting point on deciphering the mechanisms behind the multiple extremes and how severe they are,” Koll told Mongabay-India.

The study has bearings on policies on improving monitoring and forecasting systems. Ray informed that in its umbrella scheme, Atmosphere and Climate Research: Modelling, Observing Systems and Services (ACROSS), MoES has sought the development of a Research Test Bed over Odisha and adjoining thunderstorms and lightning prone areas in the next five years. The initiative will help scientists understand the land, ocean, and atmospheric processes and their interactions better leading to the genesis and propagation of thunderstorms and associated severe weather phenomena like rainfall, thunder squall, lightning hail, downburst, etc.

Additionally, enhancing the radar observational network, particularly over the regions with large data gaps in the country, development of an advanced Operational Forecast System for Multi-Hazard Early Warning System, the establishment of functional District Agro-meteorological field Units (DAMU) in all districts over the country for providing weather-based Agromet Advisory Services to the farmers at the block level and improvement of Integrated Meteorological Services for the northeast region through an increased observational network such as Doppler weather radars, automated weather stations, etc. are on the cards under the MoES scheme.

Koll called for the need to efficiently incorporate ocean data (surface and sub-surface) and ocean-atmosphere coupling in the operational cyclone forecasting framework; this would entail expanding the network of buoys in the Indian Ocean for measuring sub-surface ocean temperatures.

“Ocean conditions are becoming increasingly important because oceans are absorbing much of the heat from global warming. More than 93 percent of the additional heat from global warming is absorbed by oceans only. So that reflects largely on the surface and subsurface; cyclone characteristics are also now changing because of that. One of the characteristics that are changing is the time required for intensification. Some of the cyclones (Fani, Amphan) are intensifying rapidly,” explained Koll.

For instance, a study on cyclone Fani by Koll and his group shows that a large area of the warm ocean surface and subsurface temperatures aided the cyclone to maintain very high wind speed for a record period (36 hours), the longest duration by a pre-monsoon Bay of Bengal cyclone since 1990. The total lifespan of the cyclone was double the climatological lifespan.

While the current study doesn’t investigate economic losses stemming from EWEs, Ray indicated that they plan to go for such an analysis in the future. “Extreme weather events cause both economic as well as humanitarian losses. Economic developments in the form of high-value assets being built-in climate-vulnerable areas and ever-increasing population concentration in urban centers, alongside changes in climate, will continue to increase economic losses due to weather events in the future,” she said.

“However, an early weather warning and awareness may save losses to human life, but future climate predictions may help policymakers to plan risk mitigation infrastructure, planning land-use, better insurance coverage for the vulnerable populations, etc.,” she said.

Strengthening resilience and adaptive capacity to climate-related hazards and natural disasters in all countries is a target of Sustainable Development Goal 13: Climate Action. In keeping with the discourse on mitigation, the Fifteenth Finance Commission (XVFC) for 2021-26 recommended setting up disaster mitigation funds at central and state levels. In a departure from the expenditure-based approach to assessing state-wise allocations for the state disaster response and management fund (SDRMF), the XVFC for 2021-26 introduces a methodology that reflects the risk and vulnerability profile of each state. For SDRMF, XVFC has recommended the total corpus of Rs.1,60,153 crore for states for disaster management for 2021-26, of which the Union’s share is Rs. 1,22,601 crore and states’ share is Rs. 37,552 crores.

“Of the total fund to be given to a state for disaster management, 20 percent of that has to be segregated as the State Disaster Mitigation Fund to be spent as per guidelines to be developed by Ministry of Home Affairs for the said purpose,” Pradeep Jena, Odisha’s Special Relief Commissioner, told Mongabay-India, expressing optimism that the mitigation fund will bolster the state’s ongoing efforts to scale up climate-resilient infrastructure.

As per the Disaster Risk Index of the Fifteenth Finance Commission, Odisha tops the list of vulnerable states. Odisha’s foray into making its infrastructure disaster-resilient started post-cyclone Phailin in 2013. It had to reexamine its power infrastructure after the cyclone extensively damaged its power transmission and distribution system.

“We were constructing 500 substations under the Odisha Distribution System Strengthening Project (ODSSP), and that is when cyclone Phailin struck. After we assessed the damage to the power infrastructure, we realised that if we repeat what we have been doing, we will lose more. So we did a rehaul and consulted experts to make the power infrastructure disaster resilient. The project cost was raised from Rs 2,600 crore to Rs 4,600 to make it resilient to EWEs,” explained Jena.

The “experiment” as Jena described, paid off, and he said the capacity of power systems to withstand subsequent cyclones, including Fani, has improved. “Since then, we have initiated several such initiatives. But we do not have so much funding to dedicate to disaster-resilient infrastructure.”

Currently, Odisha is working with Coalition for Disaster Resilient Infrastructure (CDRI) on disaster-resilient assessment studies for the infrastructure sector, including an ongoing study on the power sector. Discussions are also on proposed risk and resilience assessment study for roads and drinking water sectors.

“So a good document will come out of it, but how well the state and central government use the report is the issue. We are hopeful that the outcome will be positive,” said Jena. “Our long-term interest is aligning urban development with disaster-resilient infrastructure.”