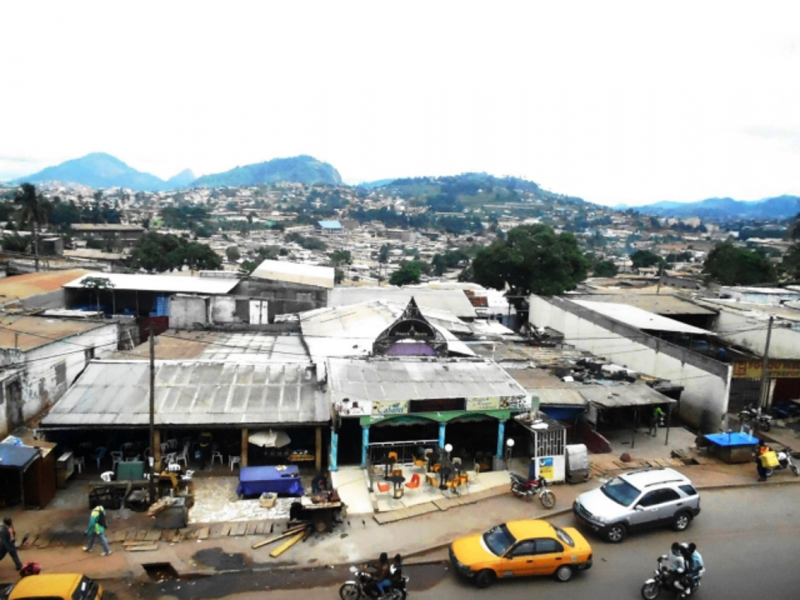 When Aboua Chantal looks down upon the homes built on her ancestral lands in the suburb of Melen, her main concern is how she can safeguard the local residents when the next rains come. Situated in the lowlands of Yaoundé, the capital city of Cameroon, Melen is an informal settlement where hundreds of families are living illegally.

‘These are the wetlands. They are meant to soak up the water coming down from the city during the rains’, explains Aboua Chantal, who is a traditional tribal chieftain. ‘But people have settled here illegally. They are building in the dry river bed and it’s not surprising that floods sometimes run straight through their homes when it rains. We are trying to encourage them to move at least seven meters from the river’s edge’.

Yaoundé is comprised of seven communes spread over seven hills on a forested plateau. The lowland areas at the base of the city are particularly vulnerable to flooding and landslides during the rainy season.

Jean-Jules Sitchiewock is responsible for disaster risk reduction and climate change programmes in one of the communes - Yaoundé Six. He is also the focal point for the ‘Making Cities Sustainable and Resilient’ initiative, an international project led by the United Nations Office for Disaster Risk Reduction (UNDRR) with funding from the European Commission. Yaoundé Six is among 20 municipalities around the world participating in the project, under which each city is developing its own disaster risk reduction (DRR) action plan.

‘On average we have five waves of flooding in the commune through the year. It is a recurrent catastrophe and the humanitarian impacts can be extensive,’ explains Jean-Jules.

Yaoundé’s two rainy seasons usually spell trouble for the thousands of low-income households living in unsafe areas. Average rainfall here is 145 mm but levels can peak at almost 300 mm in October, the wettest month. 20% of Yaoundé Six residents reside in illegal settlements in the wetlands while 15% have built precarious structures on the hillsides.

While floods can destroy homes and property, they also increase the risk of waterborne diseases which are high on the list of disaster risks in the commune. Most of the people living in illegal settlements use toilets without septic tanks. Aboua Chantalhas been active in making them more aware of the risks and the importance of good sanitation.

‘When it rains, the toilets overflow and mix with the floodwaters, polluting the whole neighbourhood. We had two cases of cholera last year where a father and son died’, she explains.

As a member of the disaster risk reduction platform created by the Mayor of Yaoundé Six, Aboua was an active participant in the development of the commune’s disaster risk reduction action plan. She worked alongside the 36 other members of the platform drawn from municipal departments and a range of organisations familiar with the commune. Members include school principals, hospital directors, law enforcement agencies, the local Red Cross, the Directorate of Civil Defence and local banks and insurance companies.

One of the priorities of the plan has been to enhance living conditions in the informal settlements by changing mindsets and behaviors. A “Clean Day” has been instituted across the commune which takes place on the first Friday of every month. Each of the development committees, formed in the 24 neighbourhoods of Yaoundé Six, mobilize their community to clean streets, ditches and drains and to remove the waste to local landfill sites.

‘The committees are mostly young people. Work begins at 6:00 am and we go out together into the neighbourhoods with whistles to wake people up in the morning,’ explains Aboua Chantal. ‘Shops remain closed until 10:00 am and each person is responsible for cleaning the area in front of their house. We also clear the ditches so that water can flow normally during the rains and not damage the road. We have warned people that they should stop throwing their garbage in the ditch as this is what causes the problems when it rains.’

Due to the strong links they have with communities, local organisations such as the Red Cross play an important role in community awareness and education under the new DRR action plan.

‘We go to communities, recruit young people and train them as first aid volunteers so they can assist the population when they are in distress. In times of disasters, the volunteers are there within the community so they can act as first responders before specialist rescue teams arrive,’ says Alain Constant, national emergencies and first aid instructor with the Cameroon Red Cross.

The Red Cross is also training community mobilizers who inform people on what actions they need to take to stay safe and minimize their losses when floods occur.

‘We work with neighbourhood leaders and carry out flood simulation exercises, so that when there are real floods, people know exactly how and where to evacuate to and how to take care of groups who may need extra attention such as the elderly, pregnant women and children.’

In some cases, households are starting to move from the wetlands to safer areas.

‘We encourage people to move away from high risk areas. There is little point in spending hundreds of francs to build a house only to find yourself in a situation where your house gets flooded and you realise you can’t live there can’t live there and have to move’, says Alain.

But relocating people from wetland areas in Yaoundé Six isn’t that simple. The commune lacks financial resources and land reserves. One solution is to develop a better network of drains and canals in the lowland areas.

‘We are investing in the construction of better flood protection such as drains, but at the same time we need to fully map the risk-zones in the city. We need better data to work with so that we fully understand the hazards’, says Jean-Jules Sitchiewock.

Under the DRR action plan, the commune will begin using ‘Desinventar’ – the disaster inventory software developed by UNDRR which will be used to establish a database with accurate and detailed records of historical disaster events in the commune.

With limited resources at his disposal Jean-Jules Sitchiewock has prioritized good communication as a corner stone of Yaoundé Six’s DRR action plan. He is capitalizing upon the opportunities presented by social media and instant messaging platforms. A Facebook Group has been established to connect and facilitate information-sharing between all members of the municipality’s disaster risk reduction platform. A Whatsapp group has also been created which is used as an operational tool, particularly by the Mayor, enabling different actors to share information on disaster events but also to promote on-going initiatives in disaster risk reduction.

‘We feel that we have learned a lot through the Making Cities Sustainable and Resilient initiative. Before we developed the action plan, we used to allocate our budget to the immediate problems raised by communities such as road repairs. Now, we are working together more strategically and want to share our experience with other municipalities’.