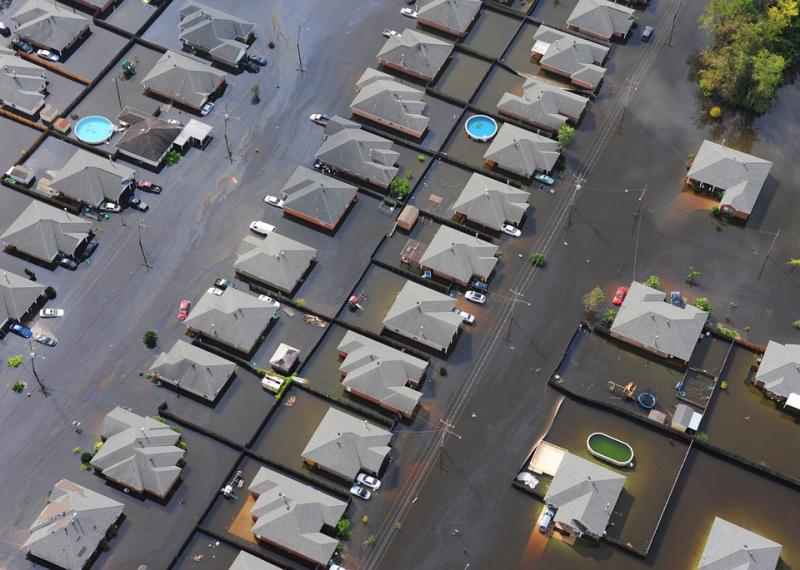 A series of recent extreme weather events — from hurricanes and wildfires in the U.S. to heat waves in Europe and floods in Japan — have put a spotlight on climate-related risks. We offer a new set of tools for assessing such risks to portfolios.

Sources: BlackRock Investment Institute, with data from Rhodium Group, March 2019. Notes: The map shows the projected GDP impact in 2060-2080 on U.S. metropolitan areas under a “no climate action” scenario. Climate changes are measured relative to a 1980 baseline. The analysis includes the effect of changes in crime and mortality rates, labor productivity, heating and cooling demand, agricultural productivity for bulk commodity crops, and expected annual losses from coastal storms. It accounts for correlations across these variables and through time — and excludes a number of difficult to measure variables such as migration and inland flooding. See Rhodium Group’s March 2019 paper Clear, Present and Underpriced: The Physical Risks of Climate Change for further details on its methodology. Forward-looking estimates may not come to pass.

Advances in climate and data science now allow us to gauge the likely overall economic impact of climate-related risks on a localized basis. To illustrate, the heat map below shows that 58% of U.S. metro areas will likely suffer annualized GDP losses of 1% or more by 2060-2080 under a “no climate action” scenario. Among the likely losers: Arizona, the Gulf Coast region, and coastal Florida.

Here are our key findings:

Sources: BlackRock Investment Institute, with data from Rhodium Group, March 2019. Notes: We use the S&P National Municipal Bond Index to represent the muni market. The chart shows the estimated market value share of the muni market exposed to GDP losses of various magnitude through 2100 under a “no climate action” scenario. For example, roughly 20% of the market value of the current muni index is expected to come from regions suffering annualized average losses of up to 3% or more of GDP from climate change by 2060–2080. We use the upper bound of the 66%, or “likely,” range of losses to illustrate a plausible risk scenario.

Climate-related risks pose a threat to the economies – and creditworthiness – of many U.S. state and local issuers, our analysis shows. Our work with Rhodium Group shows a rising share of U.S. metropolitan statistical areas (MSAs) will likely be hit by climate change in the coming decades. Within a decade, more than 15% of the current S&P National Municipal Bond Index by market value would come from MSAs suffering likely average annualized economic losses from climate change of up to 0.5% to 1% of GDP. The impacts are projected to grow more severe in the decades ahead. See the A growing burden chart above.

Sources: BlackRock Investment Institute, with data from Rhodium Group, March 2019. Notes: The chart shows the change in median hurricane wind exposure in the CMBS market, represented by around 60,000 commercial properties in BlackRock’s CMBS database. The bars represent the estimated change in the median probability of Cat 4 or 5 hurricane winds touching properties relative to 1980 under “no climate action” and “some climate action” scenarios. “Today” is a 2010–2030 estimate. We use the Saffir-Simpson Wind Scale (“Cat” 1–5) to rate hurricane wind speed. Wind fields are estimated by Rhodium using the LICRICE wind field model. For details see S. Hsiang and A. Jina, “The Causal Effect of Environmental Catastrophe on Long-Run Economic Growth: Evidence From 6,700 Cyclones,” NBER Working Paper, Jul. 2014.

Climate risk is a growing concern for owners of commercial mortgage backed securities (CMBS). We illustrate the increasing risk to the U.S. CMBS market by overlaying Rhodium’s hurricane modeling onto the roughly 60,000 underlying commercial properties in BlackRock’s CMBS database. Our findings: The median risk of one of these properties being hit by a Category 4 or 5 hurricane has risen by 137% since 1980. Within three decades, the chance of being hit by a Category 5 hurricane is estimated to rise 275%. See the Stormy weather chart above.

How exposed is my power plant?

Sources: BlackRock Investment Institute, with data from Rhodium Group, Verisk Maplecroft and U.S. Department of Energy, 2019. Notes: The chart plots the location of each U.S. electric power plant and is color coded according to BlackRock’s assessment of its climate exposure, according to the framework presented on page 17. For illustrative purposes only. Risk is expressed in standard deviations. A score of -3 (high climate risk) points to an exposure that is three standard deviations worse than the mean exposure of the plants in our study.

We find extreme weather events are not priced into the equities of U.S. electrical utilities – and introduce a climate risk exposure score that can help uncover such risks. We combine the exposure to extreme weather at each power plant location with an assessment of the materiality of that exposure, based on historical losses and forward-looking climate modeling. See the How exposed is my power plant?chart above for a geographic representation of our climate risk scores by power plant. We then aggregate the average physical risk across all power plants to arrive at a total climate risk score for each utility.