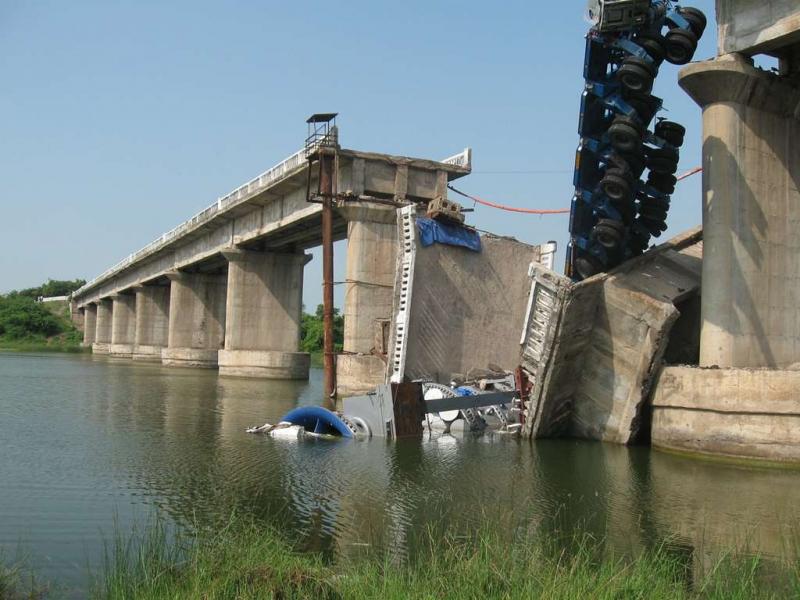 The United States is considering a $1 trillion budet proposal to update infrastructure, including its crumbling bridges. An obstacle to spending the money wisely is that the current means of assessing bridges may underestimate their vulnerability, according to a new study published in the Journal of Infrastructure Systems.

Case in point is a bridge along California’s iconic Big Sur coast, which collapsed in March, isolating communities and costing local businesses millions of dollars. Although California’s recent unprecedented rains were likely to damage infrastructure, standard risk assessments made it hard to identify which bridges were most vulnerable.

“This winter in California has highlighted the vulnerabilities of our nation’s infrastructure,” said Noah Diffenbaugh, a professor of Earth system science at Stanford and the Kimmelman Family Senior Fellow at the Stanford Woods Institute for the Environment. “Updating our infrastructure will require both making up for deferred maintenance, and preparing for the increasing risk of extreme events that comes along with global warming.”

Big Sur’s damaged Pfeiffer Canyon Bridge – out until at least September – is a harbinger of things to come. As climate and land-use change drive more frequent and intense flooding, collapses among the nation’s more than 500,000 water-spanning bridges will likely increase, the authors state.

Complicated natural factors make accurate damage estimates hard to come by, but regional and national bridge studies have predicted up to $250 billion in direct climate impacts costs – numbers that serve only as indicators of the true magnitude of costs related to climate change impacts on bridges, including lost business and ability to commute to work.

U.S. risk assessments generally assume that bridges may collapse when a 100-year flood – a streamflow with 1 percent probability of being exceeded in any given year, or 63 percent over the course of a century – occurs. This assumption underestimates risk, the paper’s authors find, because it fails to capture the full range of stream flow conditions that can cause bridge collapse.

In their analysis, the researchers considered the full variability of floods that could cause collapse, as opposed to the 100-year approach taken previously. As a result, their findings identified a greater sensitivity to changes in the underlying frequency of flooding. This result appears to support the idea that analyses considering a range of flood scenarios, as opposed to a single 100-year threshold, could be more robust and accurate.

Of 35 bridge collapses analyzed, floods caused 13, erosion of sediments around bridge foundations – scour – caused 16, a hurricane caused 1 and other influences (such as waterborne or hydraulic debris) caused 5. Superimposed H denotes sites where a hurricane or tropical storm occurred and may have influenced bridge collapse. Area of circles is proportional to drainage area of bridge sites.

Indeed, of the 35 bridges analyzed, 23 were estimated to have collapsed during a water flow of lesser intensity than a 100-year flood level. The authors note that a primary reason for these lower flow collapses is the fact that most of those collapsed bridges were built before modern design standards. Because most U.S. bridges, along with most U.S. infrastructure, pre-date the modern design standards, the results highlight a more general risk that extreme climate events pose to U.S. infrastructure.

The American Society for Civil Engineering gives U.S. bridges a C+, estimating that $123 billion is needed to clear the maintenance backlog. An additional $140-$250 billion over the 21st century may be required to address the increasing risks posed by climate change, according to past research.

“To balance funding between the backlog and climate adaptation, bridge managers will need robust data on collapse risk,” said lead author Madeleine M. Flint, an assistant professor of civil & environmental engineering at Virginia Polytechnic Institute and State University. “Our study is a step in that direction.”