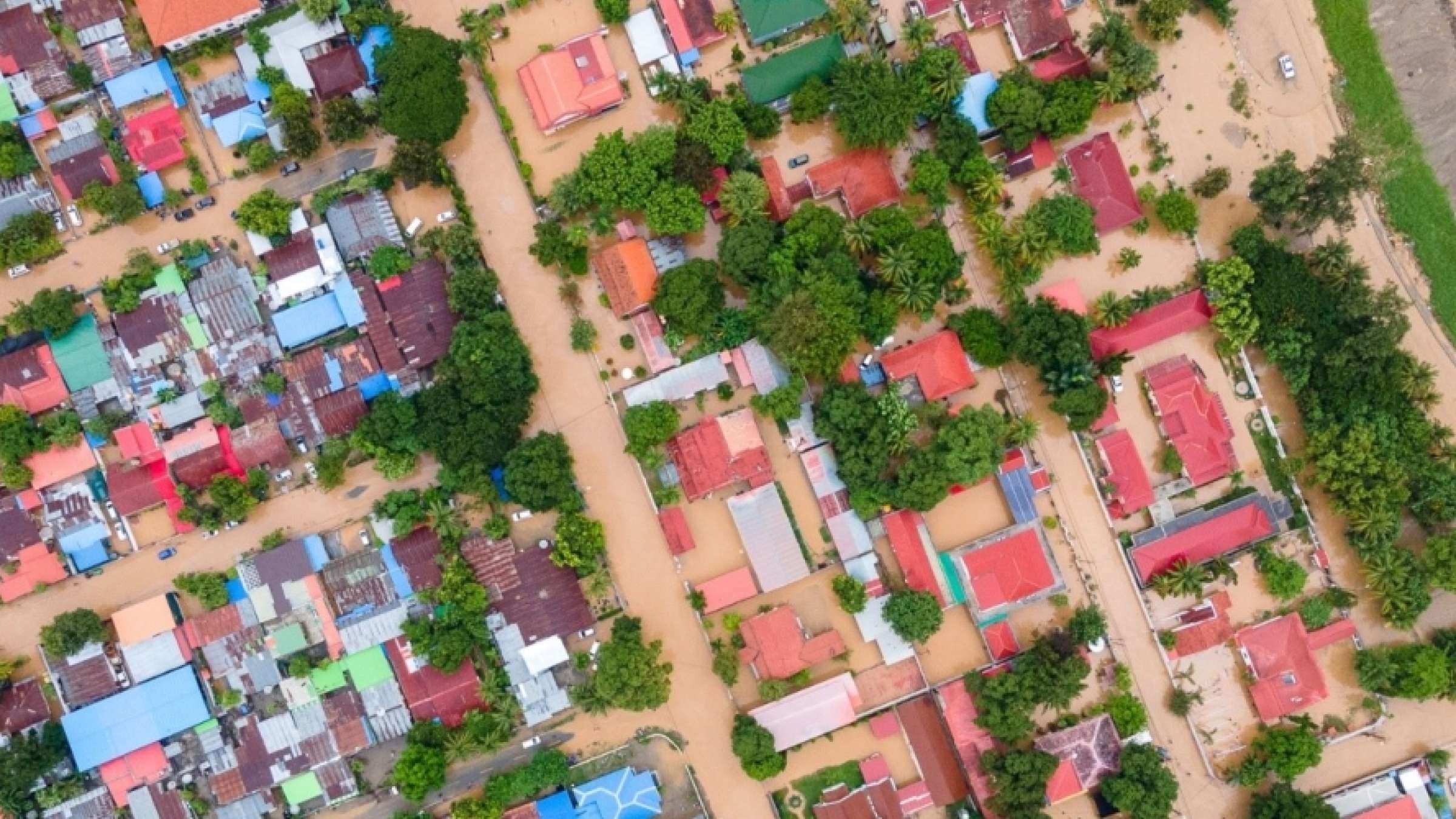 Residents of Dili, Timor-Leste had been sleeping when flashfloods started inundating the capital in the early hours of April 4, 2021. As floodwaters brought by days of rains surged and began sweeping away houses along the Comoro river, many locals abandoned their homes to find safety.

With no information on what to do or where to go, people took shelter in government and school buildings.

“The government didn’t have a proper evacuation center,” said Ms. Elisabeth Lino de Araujo, Australian People for Health, Education and Development Abroad (APHEDA) country manager for Timor-Leste. “Any building that’s safe and secure and close to where they were, that’s where communities went.”

“We all engaged so we could relocate the affected people,” said Mr. S M Maqsood Kabir, country coordinator for the Australian Humanitarian Partnership consortium in Timor-Leste.

Others worked on getting urgent supplies to flood victims. “It became a community-to-community, people-to-people [undertaking],” said Ms. Lino de Araujo, who, with a friend, used personal resources to prepare food for displaced elderly, children, and pregnant women. “Those who could help, did. The Catholic church organized a public kitchen.” The UN’s pre-positioned supplies were also distributed.

The Timor-Leste Disaster Management Reference Handbook published by the Center for Excellence in Disaster Management and Humanitarian Assistance in 2019 states flooding is the country’s most frequent disaster. This is triggered by heavy rains, low soil permeability, and excessive runoffs from mountains. The rainy season runs from December to March.

The country has early warning and emergency communication systems – solar-powered loudspeakers, weather stations, and water level meters, and communications equipment – “designed to send warnings to local community leaders who will then disseminate the information as necessary”, the handbook states.

The early warning system did not work as planned on April 4; in the first hours of the disaster, people needed to figure out how to survive on their own.

The floods, said to be the worst the country has seen in 50 years, affected 13 municipalities and 30,322 households, destroyed 4,212 houses, and took 34 lives, the UN Resident Coordinator reported. Roads, buildings, and public infrastructure sustained damage. Agricultural areas covering 2,163 hectares were impacted and irrigation systems were wrecked. The CVTL said 53 evacuation centers were set up at the peak of the crisis.

Mr. Kabir said the April floods were anything but typical. “The weather patterns really changed. We are used to having rain in November. The rains don’t usually last long, maybe 20 to 30 minutes. But that time, it was raining at night, it was heavy, and no one noticed what was happening. When people noticed, they were already underwater. Some houses were already damaged.”

Exacerbating the already tenuous situation was a COVID-19-related home confinement order that had been in effect since March 2020. “We were in a lockdown, so everyone was not prepared. The government had not made an announcement to lift the lockdown,” Ms. Lino de Araujo noted.

In the disaster response, COVID-19 rules became deprioritized. Social distancing was overlooked as victims were pulled to safety and brought to crowded shelters in vehicles. Movement restrictions were ignored in aid distribution.

Traces of the floods are visible eight months on. Most displaced families have gone home and COVID-19 protocols are back, but some roads remain impassable during rains. As this is being written, five evacuation centers were still sheltering people with nowhere to go. One site in the Manleuana suburb was abandoned after the tents flooded. The 41 families it housed were moved to a government-rented house.

Gaps have emerged in a country that is still learning to stand on its own. Failure to warn communities of the floods proved critical, as did government constraints in early recovery efforts. In the floods’ aftermath, the state appealed for financial aid. “There’s supposed to be a budget allocated to the Secretary of State for Civil Protection. But when this happened, the government had no money allocated for damages,” Ms. Lino de Araujo said.

Instead of waiting for international funds, Timor-Leste should have ready resources for emergencies, she maintained. “For example, the Ministry of Infrastructure needs to have a budget to fix broken bridges and roads.”

Mr. Kabir acknowledged the government’s limitations and reliance on international agencies in crises but noted that line agencies did what they could where they could. “The Fire Brigade along with Cruz Vermelha de Timor-Leste [CVTL or the Red Cross] acted fast to rescue the affected families from their locations. Even then, this was not enough so they asked agencies’ support.”

Meanwhile, hardware shops shuttered by the lockdown delayed rebuilding. “They needed to be open so people could rebuild,” Ms. Lino de Araujo said.

Obstructed waterways – which are dry most of the year and only fill up when it rains – was named the biggest culprit in the catastrophe. As Dili grapples with the rising demand for shelter because of in-migration, people erect houses along waterways, Ms. Lino de Araujo said.

“They block water canals. If you build the house beside the river, it’s going to be a huge problem. Once it rains, the water rises and goes to the river. It will fill the houses.”

Before the country’s independence in 2002, there was a rule against building within 100 meters of bodies of water, she said, adding that the government must have the political will to enforce this. “This is something Dili has to control,” she said.

APHEDA and its partners engage communities on the risks of living in dangerous areas and the advantages of relocating to more secure spaces, Ms. Lino de Araujo said. “Preventing [a disaster] is the best option.”

For responders, the floods bared the need for better coordination between government, agencies, and sectoral clusters. “When [different organizations] responded, they definitely did it in an efficient way. But a coordinated effort would have reduced overlapping functions,” Mr. Kabir noted.

To make sectoral groups more functional, a plan that would detail each sector’s role in emergency response and preparedness is in the offing, he added.

Recently, the draft of an emergency shelter policy handbook that provides clear guidance for addressing future emergency shelter needs was completed. “It will be easy for players to play their roles effectively,” Mr. Kabir noted.

If restoration is destruction turned inside out, stakeholders seem to be trying not to waste the opportunity presented by the floods to build back better.

Ms. Fiona Hamilton, the Team Leader for PARTISIPA program (Partnership to Strengthen Village Development and Municipal Administration)--an Australian government-funded program that partners with the government of Timor-Leste for village development, municipal strengthening (governance), and water–said as a partner of Timor-Leste’s water authorities, Bee Timor-Leste Public Company (BTL) and the National Authority for Water and Sanitation Public Institute (ANAS), they immediately supported the government’s response to deliver water to communities who had lost access to water as a result of flood damage or displacement.

As the response transitioned to recovery, the Australian government, through PARTISIPA, secured a grant to support critical repairs to the Bee Mos Water System that supplies water to tens of thousands of people in Dili, said Ms. Hamilton.

“This work is currently underway through a partnership with Cardno and Engineers Without Borders Australia, with a technical team working with BTL to ensure that repairs can withstand high-velocity rainfall for the next couple of rainy seasons. Work on the Bee Mos system is anticipated to be completed by early 2022,” said Ms. Hamilton.

She adds that while the damage that the April floods inflicted on core infrastructure was significant, the repair and strengthening work currently underway will help protect household and community access to water in the event of another flooding occurrence, reducing pressure on humanitarian response and ensuring BTL and ANAS can focus on the critical development work they have planned for 2022.

In May, the government, the UN Resident Coordinator, and agency partners started implementing a seven-month recovery plan that aims to provide undisrupted delivery of essential items and services for displaced families; protect women, children, persons with disabilities, and the elderly from the impacts of the disaster; support rebuilding efforts; and rehabilitate critical structures.

"National and international humanitarian actors, including the United Nations, worked under the leadership of the Government of Timor-Leste to respond to the disaster and offered help to fulfil the humanitarian and early recovery needs of the 30,946 flood-affected families. In the wake of global warming and climatic changes, the flash floods in April ‘21 provided more evidence of adverse impacts on vulnerable groups – including women, children and persons with disabilities - and infrastructure in Timor-Leste. It is vital that all partners must improve their preparedness, risk management, and risk reduction strategies to build resilient infrastructure and communities. Recent floods are an opportunity for the Government to make progress in Timor-Leste’s Disaster Risk Reduction commitments under the Sendai Framework with the support of all partners. Both domestic resources and international assistance need to invest much more in risk mitigation and emergency preparedness. The Government of Timor-Leste, United Nations, and partners are committed to working together to Build Back Better and strengthen Timor-Leste’s resilience." said Mr. Roy Trivedy, the the UN Resident Coordinator in Timor-Leste.

It “will build local capacity to translate weather, climate and oceans information into targeted impact-based forecasts, which will feed into sector-specific decision support systems for agriculture, disaster risk management, fisheries, and health”.

The group – comprising the UN, humanitarian agencies, and government – is conducting a mapping exercise using the 4Ws (Who does What Where and When?) tool to better execute future emergency response, Mr. Kabir informed.

The government has also passed a measure that standardizes food and non-food aid to inform humanitarian agencies’ future relief efforts, while a measure that outlines the responsibilities of different state agencies during disasters is pending.

Currently, the Ministries of Interior, State Administration, and Social Solidarity and Inclusion all have disaster management functions.

“This would address the current situation where it is not certain which agency is responsible for different aspects of disaster response and preparedness,” Mr. Kabir said. “Unless and until there is a clear policy on the responsibility and accountability of line agencies, the challenges faced by Timor-Leste now will continue.”