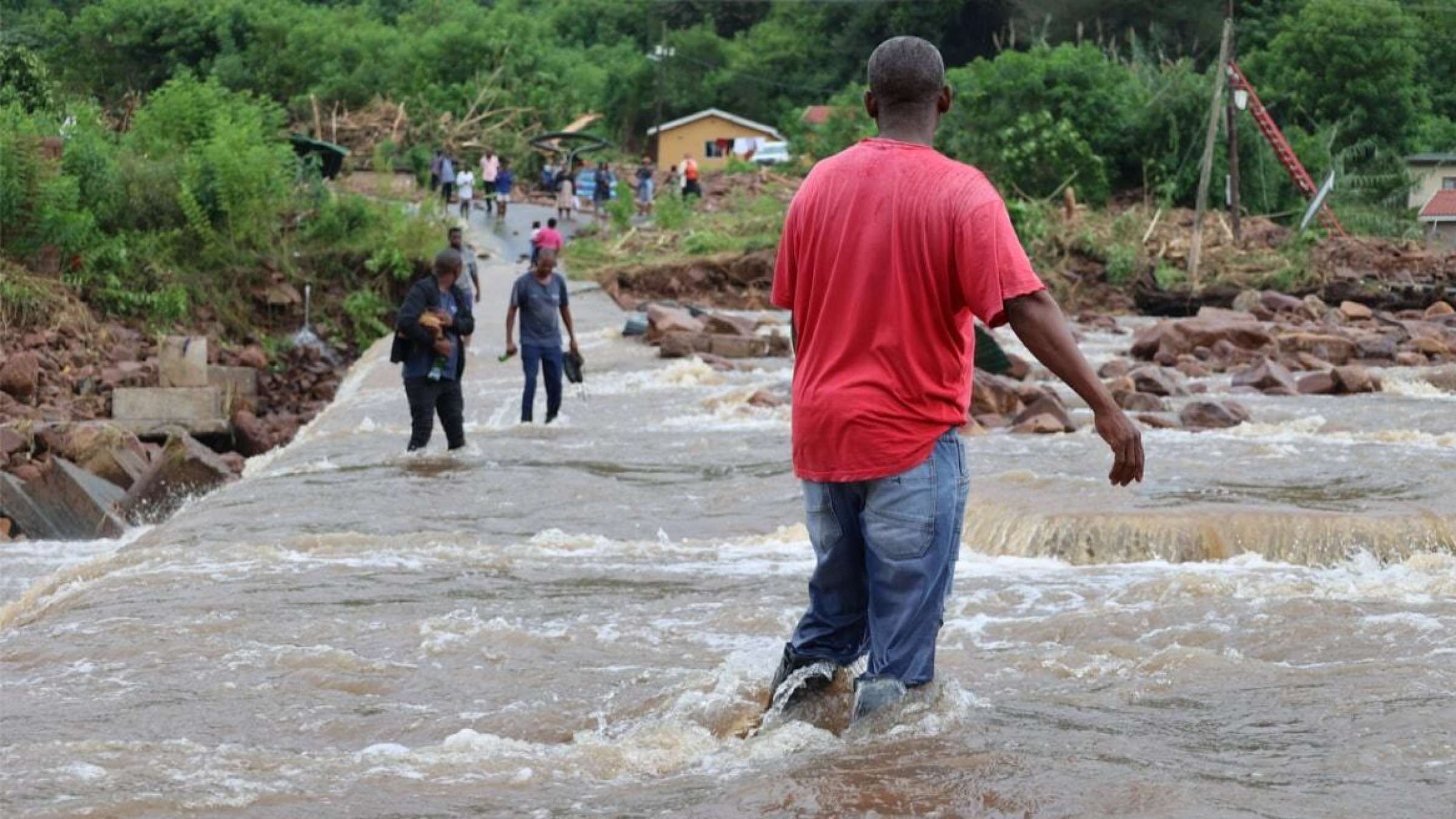 Severe weather, rain and flooding are at the forefront of the minds of many South Africans, especially those in KwaZulu-Natal. Early last week (11-12 April 2022), the province’s coast received heavy rain, with some areas recording over 300mm in 24 hours. This is about a third of the annual rainfall in KwaZulu-Natal.

The rain was caused by a strong cut-off low weather system off the east coast of southern Africa. Cut-off lows frequently occur off this coast during the autumn months. These systems can cause localised flooding as well as large wave events.

The port city of Durban (in the municipality of eThekwini) has experienced flooding events almost every year since 2016. Storms responsible for these floods typically dropped 100mm-150mm of rain in 24 hours, according to the eThekwini data portal.

Between 11-12 April 2022, a storm system dropped even more rain than that. It caused devastating floods, landslides, and loss of life. It is natural to ask whether the recent floods in the area will occur more often within the context of climate change or whether they were simply freak events. It is not possible to state conclusively that this storm was a result of climate change. However, scientists believe these types of intense weather systems will occur more frequently in the future.

Perhaps more pertinent is the question: did anyone see this coming? There isn’t a simple answer. It’s something that has been challenging scientists and engineers around the world for decades. For example scientists like myself have been trying to apply the principles of fluid mechanics to address these types of questions.

This is important because if we can predict the occurrence of an event, we can arm disaster management teams with life-saving information.

Predicting flooding is not new and consists of two methods. The first relies on historical rainfall and flood records that come from weather stations and river gauges. South Africa has many of these stations throughout the country. It is vital that these stations are properly maintained.

The second method involves computer modelling. It is difficult to predict where rain will fall, how much will fall and whether this will cause flooding. These processes depend on spatial gradients that are not resolved in regional climate models. For example wind moves from high pressure to low pressure, sometimes bringing with it rain. However the wind speed (and how quickly the rain arrives) depends on the difference between the high and low pressure. This is typically very difficult to model accurately. Advances in computer power will likely be able to address this in the future. 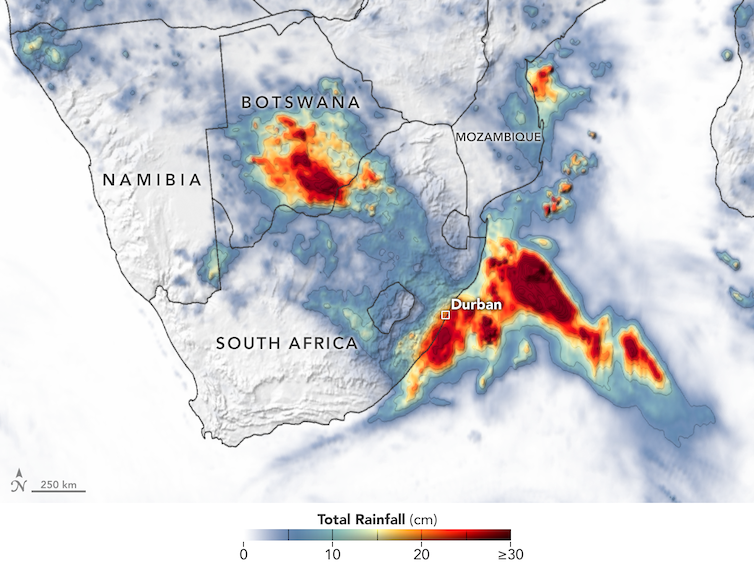 The rain was caused by a strong cut-off low weather system off the east coast of southern Africa. NASA

Predicting where the water will flow once it reaches the ground is also challenging. Some water infiltrates the soil and flows as groundwater, while some water runs along the surface (called surface runoff). Both the surface and groundwater runoff contribute to the water flowing in rivers. If the ground is saturated, there is less infiltration and more surface water will flow into rivers, causing more flooding. Increased surface runoff also contributes to landslides and erosion. Hardened impermeable surfaces in cities and residential areas also cause increasing surface runoff. Storm duration is another factor that can influence flooding.

All these factors can combine to drive significant flood events.

How do engineers and city managers develop plans to respond in real-time to these events? A possible answer lies in developing forecast early warning systems. There are good examples in the Netherlands.

The eThekwini coastal, stormwater and catchment management department has developed a forecast early warning system in conjunction with the University of KwaZulu-Natal and the Dutch engineering research institute Deltares. The design incorporates weather forecasting, flood prediction and coastal modelling. The goal of the system is to alert authorities to severe weather to provide them with temporal and spatial information to guide decision making. An example of a system like this is the Global Storm Surge Information System.

The department’s engineers and managers have deployed hundreds of rain, weather, water level and coastal monitoring gauges throughout the region that provide authorities with real-time information. The system is still in a developmental stage and requires resource investment from national government, South African universities and local authorities.

The early warning system works by downscaling output from global modelling centres such as the European Centre for Medium-Range Weather Forecasts and National Centres for Environmental Prediction. This data is fed into numerical models that predict flooding and coastal processes at regional and local scales.

The European Centre model did predict severe rain, about three days before the flood. The National Centres model did not. This highlights the difficulties in predicting weather and any decision making that follows.

Observations from the recent flood event suggest there is still a long way to improve and further develop the system. This will rely on improved data sharing between government departments, universities and communities. Currently this isn’t easy in South Africa, for policy reasons. Furthermore, government and local authorities must invest in city engineering staff and technical decision-makers.

Lastly, even if the forecast system works, African cities of the future need significant “on the ground” support in the form of disaster management teams such as police, rescue workers, paramedics and places of shelter.