Extreme storms, tides and other awful surprises the world has experienced in recent years suggest that Krugman could be right. July 2019 registered the hottest average global temperature on record. Wildfires, like the dangerous blazes of January 2020 in Australia, endanger health and safety. In Venice in November 2019, the highest tides in 50 years washed more than three feet of water over the landmark Piazza San Marco.

About 4,500 miles farther east, in my home country of Bangladesh, people have been living with dangerous flooding for decades. I have devoted my career to understanding how patterns of living combine with climate and weather patterns, making Bangladesh the poster child for global climate change impacts.

During floods in 1998 I waded chest-deep through floodwaters in Darsana, in southwestern Bangladesh, watching out for dangerous snakes, just to buy rice and kerosene for my family. In 2019, months before the tides that inundated Venice, flooding in Bangladesh killed more than 60 people and displaced hundreds of thousands.

However, everyone is not equally vulnerable to these threats. In coastal Bangladesh, I have documented the disproportionate nature of climate impacts. To support people living in distressed situations caused by natural hazards, I believe it is essential to understand the complex social landscape of local vulnerability.

Most countries face adverse consequences from climate change, but low-income developing countries are particularly at risk – first, because they have limited capacities to cope; and second, because they rely heavily on farming and fishing. Of all countries in this plight, I believe Bangladesh suffers the most.

Studies show that any change in expected weather and climate patterns will seriously reduce Bangladesh’s food security. This will hinder the nation’s efforts to reduce poverty and reach the United Nations Sustainable Development Goals. 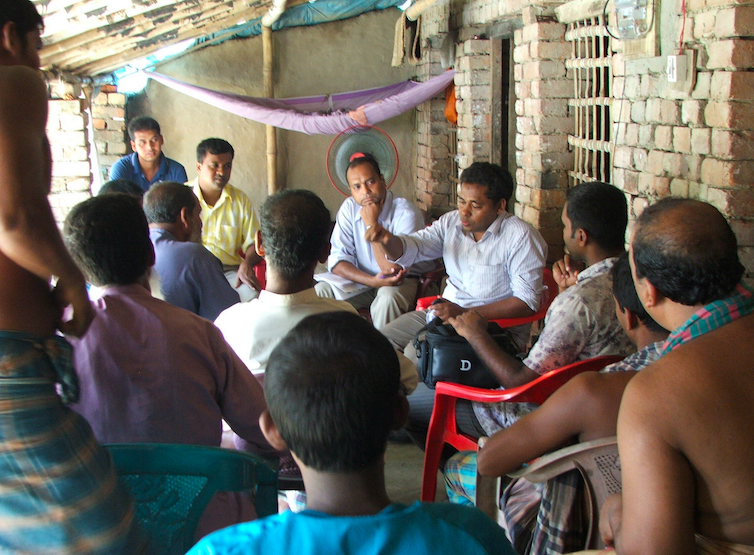 Farmers come together in field schools, where they discuss how to handle the changing climate. Saleh Ahmed, CC BY-ND

Most people in this disaster-prone region also live in challenging socioeconomic conditions. Evidence shows that race, ethnicity, religion, gender, age and other socioeconomic differences can amplify disaster outcomes and shape local vulnerability. For example, women, children and elderly populations are more vulnerable than others because they have limited social and economic resources and access to public and private support before and after disasters.

The role of wealth, religion and gender

In 2017 and 2018 I interviewed 250 local farmers and several others in the Kalapara area of coastal Bangladesh. Many of them were directly impacted by sea level rise, tropical cyclones, coastal flooding, rainfall variability and saltwater intrusion. Kalapara is one of the most climate-vulnerable locations in Bangladesh.

Here residents’ vulnerability depends on religion, ethnicity, gender and the size of their farm operations. Large farmers usually have more money, social power and local influence. They also have better access to various public and private resources that can be critical for coping with environmental stresses. The poor and those with limited resources are least equipped to confront those crises. 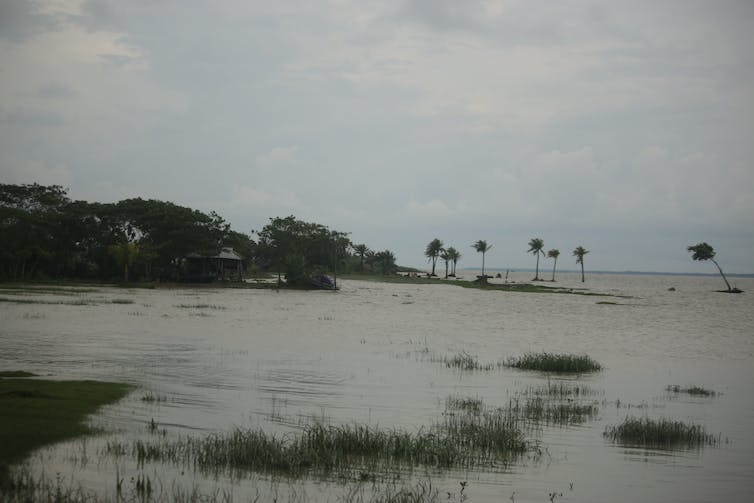 Religion can play a delicate role. In Kalapara, Muslims are the religious majority and Hindus are the minority. My own findings indicated that in most cases Muslim farmers earn more money from both farming and nonfarm activities than the Hindu farmers.

Muslim farmers also get better access to early warnings and other public and private resources, such as financial support and food aid in times of disaster. Since Muslims are the religious majority in Bangladesh, they have more social capital and stronger networks than other religious groups. In Kalapara, Hindu farmers are often marginalized and receive limited access to resources in times of crisis.

I have found that gender is a factor too. Most women who go into farming are excluded from local power structures. Men’s farms tend to be larger and earn more money than those owned by women. But female farmers usually earn more money off the farm, by selling poultry or handicrafts, than men do.

Men receive more of the critical early weather and climate warnings than women because they have stronger connections with agricultural extension agents. Men also enjoy easier access to local markets and mobile phones. All of these resources offer them information on weather and climate, whereas women often face barriers because of religious and cultural restrictions.

In the complex landscape of local vulnerability in Kalapara, the majority of the people are ethnic Bengalis who are largely divided between Muslims and Hindus. Others are members of the Rakhine ethnic minority. These farmers, who settled in the region in the late 18th century, came from modern-day Myanmar. At that time most of coastal Bangladesh was covered by forests, which Rakhines cleared to establish their settlements.

As time passed, more and more Bengalis started to settle around the Rakhines in the region. Rakhine farmers’ culture and religion differ substantially from those of mainstream Bengali farmers. Many Rakhines still speak their native language, also called Rakhine, although they can speak some Bangla.

The language barrier limits their ability to participate in local government or other social and political activities. They live in remote villages, and tend not to understand official early warnings of major storms or other natural hazards.

Bangladesh’s climate is changing quickly. Adapting to this crisis requires understanding how complex and vulnerable the landscape is.

Policymakers sometimes overlook local social dynamics when providing early warnings, food or other social services. Reacting without careful planning or understanding local societies could leave some people vulnerable and risks overlooking groups who are already under stress because of climate change. As Bangladesh seeks ways to adapt to climate change, it could set an example of inclusive planning for other nations to follow.