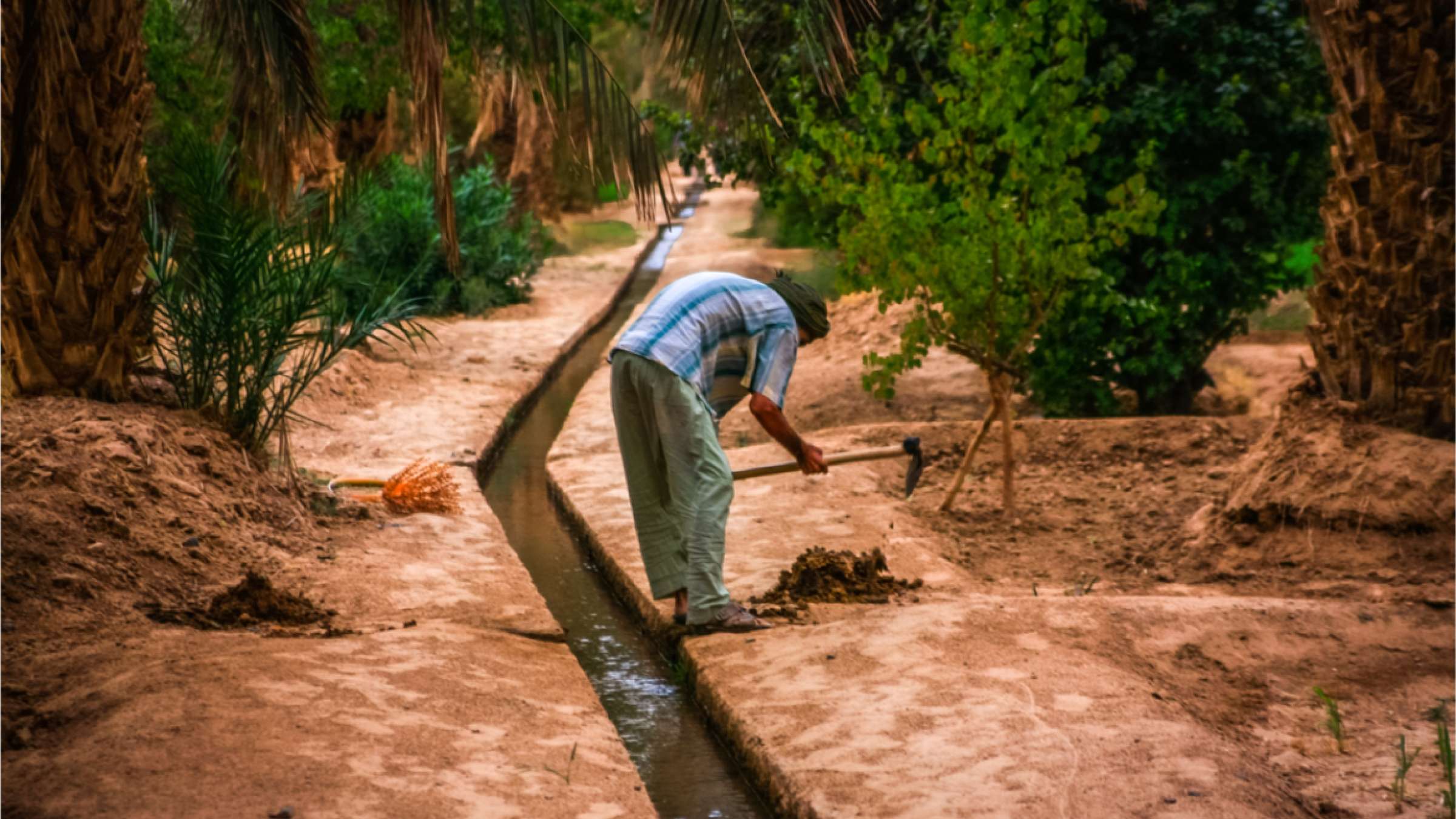 Blessed with fertile lands, the Saïss Plain in the Fès-Meknès region of Morocco, is one of the country’s most productive agricultural centers. Over 82 per cent of the water from the Sebou-Saïss basin is used for agriculture. However, in the last 15 years, the Saïss water table has steadily decreased by around 100 million m3 per year.

“I wish I could continue to cultivate vegetables – potato, onion, zucchini, cauliflower, pepper…but recently I have had to reallocate five hectares to plant almond instead because it doesn’t consume too much water.”
- Oussama Jriri, a farmer on the Saïss Plain in Morocco

Farmers like Oussama have traditionally depended on the irrigation canals to cultivate their lands. Now, with water no longer flowing through them, farmers have turned to costly coping mechanisms such as digging wells or abandoning plots of land.

“I have some difficulties with the water pump. As a woman, I feel scared if I have to operate the pump at two o’clock in the morning. So, I hired some workers to irrigate for me at night,” says Hamouna Boubka. “When I get up at 5 A.M., I go out and manage them. I work until five in the afternoon and I irrigate until I run out of water. Then the workers come back at night to do it all over again.”

Water scarcity combined with the impacts of climate change, is dramatically impacting the lives of farmers in Morocco and around the world.

Water use has increased sixfold over the past century and is rising by about 1 per cent a year, with agriculture accounting for 69 per cent of global water withdrawal. It is estimated that climate change will further aggravate the situation in countries already experiencing water stress (World Water Development Report 2020).

If the unsustainable use of groundwater for irrigation continues, the Saïss Plain could transform into a high desert plateau within the next 25 years.

Recognising the urgency of the situation, the Government of Morocco, under the Green Morocco Plan, is finding ways to mobilise surface water and protect water resources on the Plain.

With support from the Green Climate Fund (GCF) and the European Bank for Reconstruction and Development (EBRD), the Government of Morocco is building a bulk water transfer scheme from the M’Dez dam to the Saïss Plain to irrigate the farms in the region.

This climate-resilient infrastructure represents a paradigm shift in water resource management and will improve the climate resilience of the Sebou-Saïss water basin. GCF’s climate finance, a grant representing 15 per cent of the total project cost, mobilised the scale of funding required to turn this type of climate investment into a reality. Moreover, once the project is fully operational through a Public-Private Partnership (PPP), GCF’s support – which allows for the availability of sufficient public subsidies under the PPP scheme – will contribute to the affordability of water services for the communities.

The new irrigation network will provide reliable surface water, enabling sustainable agriculture and strengthening the capacity of farmers to adapt to the impacts of climate change.

“This water conservation project is so important for this area. It will make it possible for the local farmers to ensure their investments are sustainable and for them to continue living on this Plain. Irrigation is what makes living here possible.”
- Nabil Aloussi, Project Director of the Saïss Water Conservation Project, Ministry of Agriculture, Fisheries, Rural Development, Water and Forests

Oussama couldn’t agree more. “Agriculture won’t stop because of lack of labour, but lack of water,” he says.