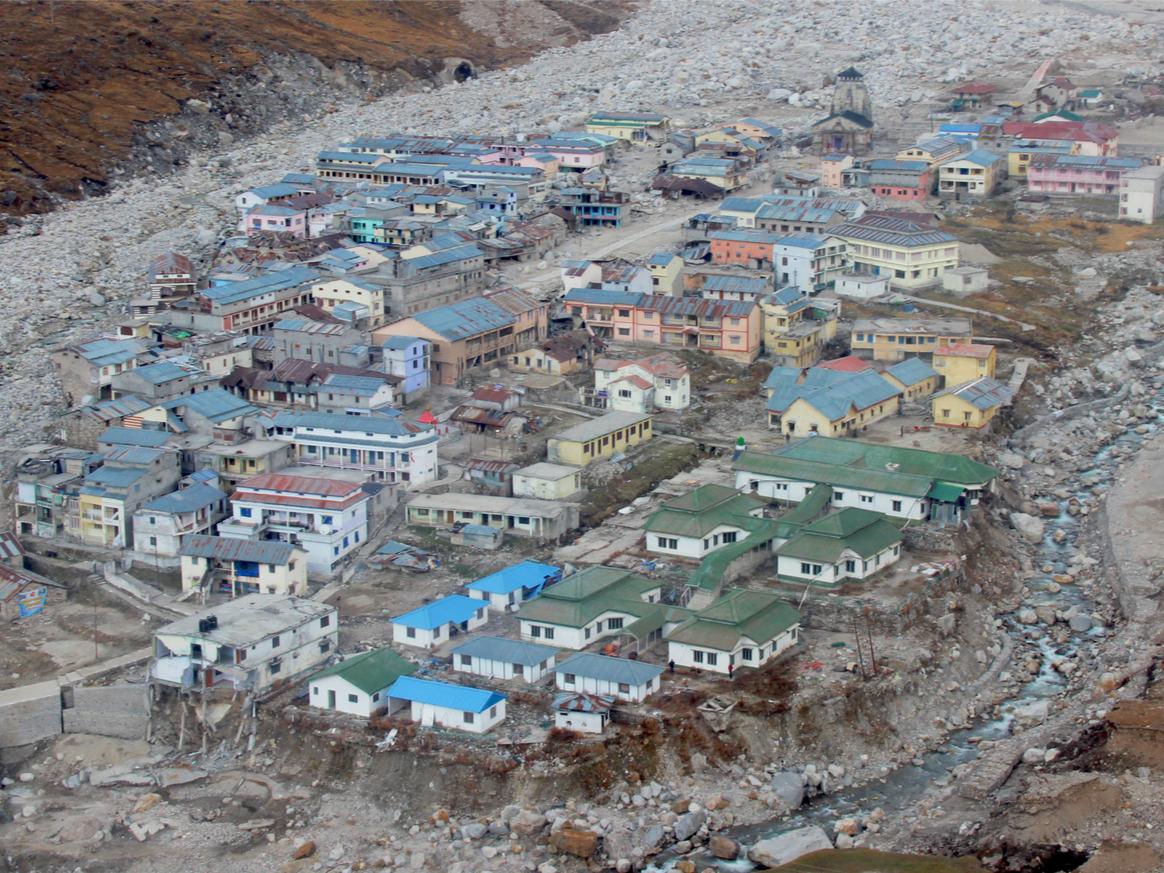 Under the weight of a suspected avalanche, a massive chunk of ice and frozen mud broke away from a glacier in the high Himalayas and fell into a lake that had formed at its snout due to climate change. The moraine around the lake collapsed and a flash flood came roaring down the Rishi Ganga river in Uttarakhand, India, on the morning of February 7. Over a day later, more than 152 people working inside tunnels to build two hydroelectricity projects downstream were still missing; 25 have been rescued and ten bodies found. Mud inundates the project sites, and teams are still trying to open up the tunnels. One large and ten smaller bridges have been washed away.

Glaciologists are trying to identify the glacier inside the Nanda Devi Biosphere Reserve that broke away due to six-decade-high temperatures in January, another effect of climate change. This had led to pockets of meltwater within the glacier, thus accelerating the breakup and adding to the volume of water in the lake. When the lake collapsed, the flash flood brought mud and boulders down with the gushing water. The boulders smashed into the dams being built for the hydroelectricity projects; the mud engulfed the tunnels, long after the floodwaters had passed downstream.

First noticed by residents of Raini village which is 3,700 metres above the mean sea level, the floodwaters travelled over 100 km down steep slopes through tributaries of the Ganga before calming down somewhat, though for a while India’s longest river flowed above the danger mark in Haridwar where it descends into the plains, and people were evacuated from the banks there.

The State Disaster Response Force (SDRF) of Uttarakhand and a unit of the Indo-Tibetan Border Police (ITBP) stationed nearby started rescue operations at the hydroelectricity project sites within an hour of the flash flood passing by. They were hampered by the volume of mud blocking the tunnels and then by the river’s daily afternoon rise due to snowmelt. Personnel of the National Disaster Response Force (NDRF) joined rescue operations overnight. The army and helicopters of the Indian Air Force were kept on standby.

Vijay Singh, resident of Raini – which is perched on the upper slopes above Rishi Ganga – told The Third Pole that Rishi Ganga hydropower project was completely washed away. “It was over in a flash. It happened so quickly that people working at the construction site had no chance to escape and were washed away. The level of water in the river (Rishi Ganga) rose by at least two metres in seconds.”

A bridge, the only connection to some remote villages, was also destroyed, Singh said.

Raini is the cradle of the famous environmental movement, Chipko, of the 1970s during which rural activists, predominantly women protested against logging by making human chains around trees.

It is not the first time that this project has sustained damages due to sudden, excessive flow in the Dhauli Ganga. There have been several instances, due to which the 520 MW project has faced repeated delays. “The setback is severe, and it might take years to rebuild,” the official said. Initial estimates of damage have been pegged at close to INR 5 billion (USD 68.6 million).

Work at the Tapovan Vishnugad Hydropower Project started in 2005. It was supposed to be commissioned in financial year 2020-21. People from the region displaced by the project, and now the disaster, have started a dharna, or protest, demaninding rehabilitation.

The avalanche, the glacier, and the lake

Pradeep Srivastava, scientist at the Wadia Institute of Himalayan Geology in Uttarakhand capital Dehradun, told The Third Pole that there were at least 25 glaciers in the area of the Nanda Devi Biosphere Reserve where the avalanche may have started, and it was not yet known which glacier had partially collapsed.

The Nanda Devi group of glaciers cover an area of around 690 square km and form the catchment of the Rishi Ganga.

Srivastava confirmed the readings of the India Meteorological Department that showed January 2021 to be the warmest January in Uttarakhand in six decades. March and April are considered the avalanche season in the high Himalayas, as the snowmelt accelerates after winter. Scientists fear this has been brought forward by climate change. A bout of heavy snowfall in early February may have been the immediate avalanche trigger.

It has been an unusually mild winter all over the Hindu Kush Himalayas, and NASA satellites have captured images of snow-free glaciers near Mount Everest this January.

As glaciers in the Hindu Kush Himalayas recede due to climate change, the faster melt rate is creating ever-larger lakes at their snouts, in an area of unstable gravel, boulders and mud. A GLOF occurs when the volume of water cannot be contained by this unstable mix, called moraine. So far, the most comprehensive report of this phenomenon and the risks posed by it has been prepared by the Kathmandu-based International Centre for Integrated Mountain Development (ICIMOD). The 2013 disaster that affected a large part of Uttarakhand and killed over 5,700 people was caused by a GLOF, and there have been many since then in India, Pakistan, Nepal and Bhutan.

The ICIMOD findings were supported by scientists from around the world in the Special Report on Oceans and Cryosphere in a Changing Climate by the Intergovernmental Panel on Climate Change (IPCC). Anjal Prakash of the Hyderabad-based Indian School of Business (ISB), who was a coordinating lead author of that report, said, “Temperatures are rising in the Hindu-Kush Himalayan region and the rise in global temperature will have more impact in the Himalayan region due to elevation-dependent warming. If the world can keep the temperature rise to below 1.5 degrees Celsius, in the HKH region it would translate to at least a rise of 1.8 C, and in some places, above 2.2 C.”

“Himalayan regions are also least monitored, and this event actually shows how vulnerable we could be. I would request the government to spend more resources in monitoring the region better so that we have more information about the change process. The result would be that we are more aware and could develop better adaptation practices.”

Glaciologist D.P. Dobhal, who used to be at the Wadia Institute, said that after the 2013 disaster, more glaciers in the Ganga catchment were being studied, but there was little information on glaciers in the Nanda Devi Biosphere Reserve because it was so difficult to reach the area. “Out of around 1,000 glaciers in Uttarakhand, only 10-15 are being monitored,” he pointed out.

The flash flood – called Glacial Lake Outburst Flood (GLOF) by scientists – was a direct impact of climate change. Downstream impacts were worsened by dams and ill-planned road construction. Dams and tunnels for hydroelectricity projects as well as roads are being built in the area – as in much of the Hindu Kush Himalayas – ignoring the destabilising effect on mountain slopes. So, the flash flood carried a lot more debris and caused a lot more damage downstream.

All hydroelectricity projects downstream for over 100 kilometres had to be shut down. As a result, a day later India’s electricity grid was still 200 MW short.

Experts have been repeatedly warning against building dams, tunnels and poorly-planned roads in the high Himalayas. Ravi Chopra of Dehradun-based Peoples’ Science Institute recalled to The Third Pole that a committee appointed by India’s Supreme Court after the 2013 disaster had recommended that no dam be built above an altitude of 2,000 metres. This is a “para-glacial” zone from which glaciers have retreated, but they have left behind an unstable mix of earth and rocks unsuitable for dams and tunnels. The committee had specifically said that six dams proposed on the Dhauli Ganga should not be built. The second and larger project inundated by this GLOF was being built by Government-owned NTPC despite this recommendation.

Overall, the committee had recommended scrapping 23 of the 24 dam projects they studied.

The February 7 flash flood did not directly affect local residents because villages are located on mountain slopes well above the riverbed. The first reports came from villagers standing on hilltops and shooting videos on their phones. The information spread immediately on social media, but not fast enough for the labourers working in the tunnels of the Rishi Ganga and Tapovan hydroelectricity projects to evacuate before they were engulfed by a wall of water, mud and boulders.

Both hydroelectricity projects are run-of-the-river, which means a dam is built to channel the river into a tunnel that can be eight to ten kilometres long, then the water is dropped vertically to run turbines that generate power; and then the water is led back to the river. Videos showed the dams and spillways being overwhelmed by a roaring wall of water.

Later images showed rescue personnel breaking into the tunnels to pull out the workers trapped inside. The earth moving machines used by the dam builders had all been swept downstream, and it was a painfully slow process to get more machines down the steep slopes to the riverbed. Once there, more rescue personnel feverishly worked to remove mud and boulders from the ends of the tunnels.

Glacial lake outburst floods: A new climate-related threat from above

Peru: The dangers of glacial lake floods: Pioneering and capitulation