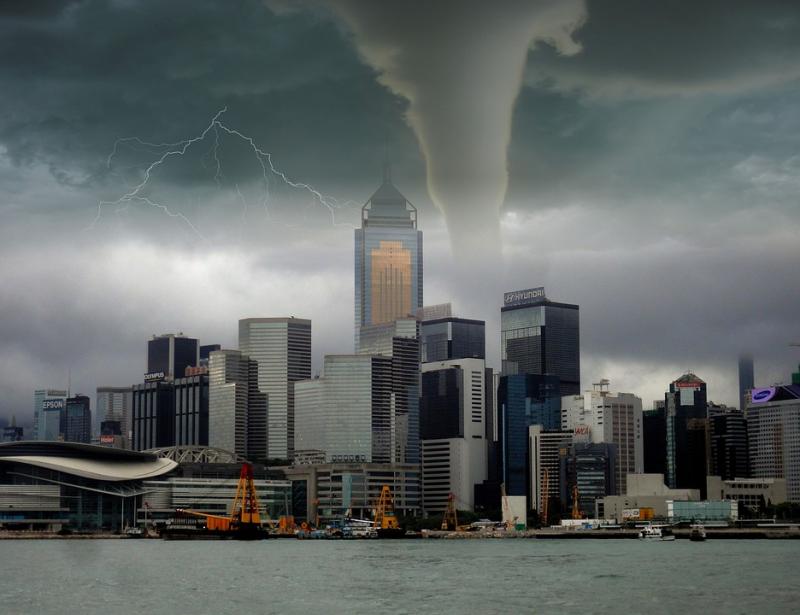 Companies around the world are vastly underestimating the risks that climate change poses to their business, a new study finds.

The study, published today in the journal Nature Climate Change, analyzed disclosures from more than 1,600 global companies and found that they are collectively underreporting the financial implications of climate risks to investors by at least 100 times.

Human Nature spoke with Allie Goldstein, a scientist at Conservation International and the study’s lead author, about the findings.

Question: What was this study about?

Answer: This study looked at how companies were gauging climate change risk and how they were trying to adapt to those risks. We looked at more than 1,600 companies, so it’s the largest private-sector adaptation study to date, and we found that most companies, about four out of five, reported that they did experience physical risk from climate change within the last year — but only about 20 percent were able to quantify those risks in financial terms. We found that companies had some major blind spots in terms of their understanding of the magnitude of climate risk and also the types of strategies that they use to adapt.

Q: What kind of climate risks are we talking about generally?

A: The risks that companies are thinking about are sea-level rise, which can affect coastal assets; extreme heat, which can increase power costs and which affect industries that rely on people working outside such as farming or construction; and increased risk of storms that can shut down operations, like the typhoons and cyclones that we hear about in the news more often. From a business perspective, some of the main things that companies are thinking about are business interruption — having to shut down a factory or a store, which means loss of production and sales – and also a risk to their raw materials and supply chains.

Q: How would you describe, based on what you found, the overall state of preparedness of corporations to these kinds of climate risks?

A: I think that businesses are taking incremental steps to prepare for climate change and incorporating climate studies into business continuity plans, but I don’t think that as a whole the private sector is prepared for some of these extreme risks — like the fact that there was a major hurricane in the past might hit every century, now might hit every 10 years, the fact that if the Greenland ice sheet melts, we could see up to 7 meters (23 feet) of sea-level rise. So, there are kind of these tipping points that are potentially embedded in the climate system, but companies are preparing for more incremental change, I would say.

Q: Where did you get all this information about these companies for the study?

A: We used company disclosures to investors — the non-profit organization CDP (formerly known as the Carbon Disclosure Project) asks companies to disclose a variety of climate-related information on behalf of institutional investors. So we set up a data partnership with CDP and were able to look at all of those responses. In the past, those disclosures have mainly been used to look at companies’ greenhouse gas emissions; we were the first to look at the climate risk and adaptation responses across the entire set of data.

One of the things we looked at was essentially gaps in disclosures, so the question would be, is this information enough for investors to be able to make informed decisions about whether the companies that they are investing in are actually prepared for climate risk? There were a number of responses where the company said they faced a risk but then they didn’t report a risk management strategy; there were examples of incomplete or nonsensical responses. So the data is definitely not perfect, but I think that’s sort of the point — that we were looking at what companies are disclosing, or not disclosing, to investors who are asking.

Q: What surprised you from your research?

A: It was really interesting to see the range of unusual ways that climate change might affect our lives through how we interact with the private sector, which for most people on the planet is all the time. Such as the fact that planes might have to carry lighter loads because as the temperature increases, the air provides less lift; the fact that tire companies were developing synthetic alternatives to rubber to use in tires since they saw increased risk of drought in the places where they grow rubber. These impacts affect nearly every aspect of our lives that we might not immediately think of.

Q: One of the things that Conservation International is always promoting is the idea of using nature to help us adapt to climate change. How are companies doing this?

A: Overall, we found that only 3 percent of companies were including nature as part of their adaptation strategy — about 50 companies. Strategies such as upstream forest management and coastal ecosystem restoration may not help every company, but we definitely think that 3 percent is too low given the potential. Investments in nature are often more flexible than hard infrastructure — a wetland that absorbs stormwater can migrate inland over time, whereas a seawall is stuck in place — and they often provide lots of co-benefits beyond risk reduction.

Some companies are recognizing this value. For example, GlaxoSmithKline, a pharmaceutical company, supports partnerships that protect biodiversity, recognizing that they need biodiversity to develop new medicines and that climate change could threaten this. Also, Bechtel, an engineering and construction company, is working with Conservation International to implement “green-gray infrastructure,” or infrastructure that combines mangroves and engineered structures, in the Philippines to protect communities on the coast. So there are interesting examples — but overall not enough companies are doing this.

Q: What has to happen to persuade more companies to take action?

A: In terms of including nature within adaption strategies, we found that most of the companies that were doing that typically did so through partnerships with either governments or NGOs, so I think that is one of the key recommendations. Another next step is one that’s already happening: The Financial Stability Board, an international body that monitors the global financial system, recently recognized that companies were underreporting climate risk to investors. So they established the Task Force on Climate-related Financial Disclosures, which last year issued a set of recommendations on how companies should be reporting on climate risk. We are seeing that a lot of companies are taking that seriously, so we expect that more companies will be quantifying the financial implications of climate change in the coming years. I think that many will need support in order to do that, but we are seeing a general recognition of the problem and a movement to correct it.

Recommendations of the Task Force on Climate-related Financial Disclosures

Investing in climate resilience should be a business fundamental

The private sector, agriculture and climate change. Connecting the dots

Weathering the next storm: a closer look at business resilience