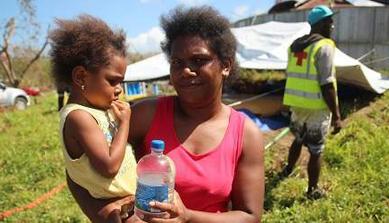 In Vanuatu the Red Cross has a long history of working on disaster risk reduction programmes with hazard prone communities. With its network of community volunteers in all provinces and islands, the Red Cross played a key role in issuing early warnings before Cyclone Pam struck the country on March 13. As a result, most people were able to evacuate to safety and loss of life was low. Lives were saved thanks to good meteorological data, good communication and fast action by trained volunteers in local communities.

Fabrina from Mele Village, Efate, Vanuatu is grateful to the Red Cross for warning her community over the radio about the onset of Tropical Cyclone Pam. She says that without the alert they may not have survived the night.

"We heard information on a radio broadcast from the Vanuatu Red Cross that a very large cyclone was coming, the strongest to ever to hit the island," said Fabrina. "The advice we got was we must prepare properly to make sure we don’t get hurt. We should find a safe shelter and stay in one place for the night."

In the months before the cyclone, the Vanuatu Red Cross had worked with Fabrina’s community and taught them what they needed to do in such an event. She and her family immediately started to take cast iron sheets and put them over the windows and doors of her father’s house as extra protection during the storm. She also filled some water containers.

"We knew from the Red Cross that the cyclone could contaminate our water sources, so we made sure we filled up all our containers with enough clean water to last a few days."

Before the cyclone made landfall Fabrina and her four children went to her father’s house to take shelter along with her grandparents, sister, brother-in-law and their two children. Fabrina’s husband went to his parents place to make sure they were safe.

As the cyclone reached its full force, one of the iron sheets was ripped from the roof of the house where they were sheltering and the family had to move to another room as rain poured in.

"The little ones were so afraid, they were crying with the sound of the wild wind. I was also terrified and thought to myself that we might die during the night."

Sabrina spent the night crying at the thought of losing one of her children and praying there would be no loss of life. In the morning, once the cyclone had passed, she found scenes of total devastation in her village.

“It was hard to see our village like this, the cyclone caused so much damage,” she says. “But here people just go on with life. Immediately people had started cleaning up. We had enough food and clean water to last the first few days and now we have clean water from the Red Cross,” she explains, referring to the water treatment unit that the Vanuatu Red Cross has installed in Mele to provide the community with clean drinking water until their village water tank is cleaned.