LAWRENCE — When Jude Kastens was developing a new floodplain mapping model more than a decade ago as part of his doctoral dissertation at the University of Kansas, he aimed to address a critical information gap that often hindered officials during major flooding events: the lack of real-time, wide-area predictions for floodwater extent and depth. 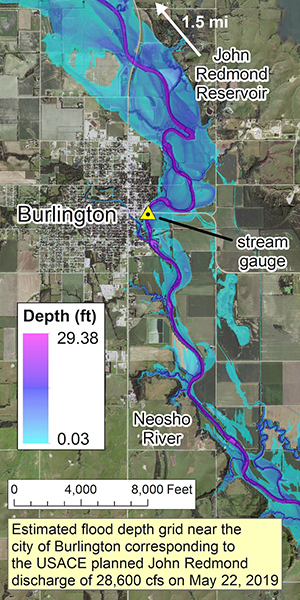 ​Dependable, detailed inundation estimates are vital for emergency managers to have enough situational awareness to quickly get the right resources and information to flood-impacted communities. In 2007, severe flooding in southeastern Kansas put a spotlight on the lack of timely, reliable projections for floodwater spread.

With heavy rains this spring (May 2019 was the wettest month ever recorded in Kansas), officials at the Kansas Water Office and Kansas Division of Emergency Management worked with Kastens, now a KU associate research professor with the Kansas Applied Remote Sensing Program at the Kansas Biological Survey, to get a more precise read on where floodwaters could rise to, based on his approach to integrating data from elevation maps, stream gauges and National Weather Service river stage forecasts.

“I worked with the Kansas Water Office in May,” Kastens said. “The ground was saturated, and the reservoirs were getting full, and with a lot more rain in the forecast, major flooding across central and eastern Kansas was looking imminent. Some years ago we’d developed this inundation library largely in collaboration with the Water Office and the Kansas GIS Policy Board but had never had the chance to put it through its paces in real time. It was based on the approach that I developed for my dissertation, and we had flood libraries for the greater eastern half of Kansas, based on the gauged stream network. For instance, if you drive south of Lawrence on Highway 59, you’ll see a USGS stream gauge box by the bridge over the Wakarusa River. There are about 200 gauges in Kansas that collect real-time stream stage information, and in times of flood, the National Weather Service provides stage forecasts several days out for a lot of these. We can take these data and map estimated current or future flooding, between gauges or around one.”

Kastens’ model (called FLDPLN, or “Floodplain”) maps potential inundation as a function of stage height using basic hydrologic principles and gridded elevation data. Because the approach requires so few inputs and little supervision, it has significant advantages for real-time mapping over existing methods such as the more precise but more complicated hydrodynamic models that FEMA uses to map 100-year floodplains.

Working with Kansas officials as historic rainfalls of 2019 threatened several areas of Kansas with flooding, mapping efforts were focused on three critical locations.

“We modeled the Neosho River south of John Redmond Reservoir in Coffey County down to Oklahoma, which is about a 100-mile stretch,” Kastens said. “We also modeled the Neosho and the Cottonwood rivers above John Redmond, centered around Emporia close to where those two rivers come together in Lyon County. The third area was around Salina, where flooding along the Saline River and Mulberry Creek was approaching historic levels.”

When John Redmond Reservoir just above Burlington on the Neosho River was nearly at capacity and the Army Corps of Engineers was planning the release of large volumes of water, Kastens’ efforts helped inform local leaders of the potential flooding extent — and they shared his flood maps with the public.

“Using projected discharge and stage information from the Corps, we modeled Neosho River flooding at Burlington and down through the rest of Coffey County,” Kastens said. “John Redmond was built by the Corps in the early 1960s to provide flood control along the Neosho, but the reservoir flood pool had reached capacity and needed to have some pressure released to avoid compromising the dam. With the Neosho already running high, city managers and commissioners had a lot of concern with how bad it was going to get because the Army Corps was going to have start releasing a very large quantity of water out of the reservoir. I made some maps using Corps projections supplied by the Kansas Water Office and also by the Coffey County GIS coordinator, Cara Mays. It helped greatly that Cara recently completed her master’s thesis at KU using the FLDPLN model to simulate the historic 1951 flood in Burlington, so she was well aware of its capabilities.”

Going forward, Kastens — who did a lot of this work during his free time in the evenings and weekends as a public service — hopes to automate the task of generating flood maps to lessen the workload when streams and rivers threaten to overspill their banks.

“With my other obligations at KBS, a lot of off-the-clock effort was needed to see this through,” he said. “Time is of the essence during major flood events. We need to develop software tools to help automate the mapping process and hand it off to these other agencies so they have the freedom to map whichever scenarios they want. I think our work in May demonstrated the value of our mapping approach, and hopefully we can pull together a project to help us move forward with the automation. So, when that next flood hits, emergency response personnel can just run the models as they see fit. That’s how we always envisioned this thing — we construct the inundation libraries for others to use during flood emergencies or simulations.”

Kastens’ novel approach to flood mapping has proven to be such an improvement, recently he’s worked with a private firm to commercialize the technology and provide services outside of Kansas to emergency management officials and entities with property in flood-prone areas.

“In 2015, we entered an agreement with Riverside Technology Inc. based in Fort Collins, Colorado, working through KU Center for Technology Commercialization to try to commercialize this stuff,” Kastens said. “They did their homework and market research and saw a real opportunity to develop inundation mapping solutions built around our flood libraries. Our contract with Riverside expires next year, so we will just have to see what happens after that. We made sure we carved out Kansas from the agreement, which allows us the freedom to provide direct assistance during flood events like we did in May.”

“They are never perfectly accurate, but then again neither are more sophisticated models. No two floods are the same, and a lot of resources are being expended in the public and private sectors to do what we are already capable of doing cheaply and efficiently right now here in Kansas.”

The Kansas Biological Survey, a KU Designated Research Center, was established at KU in 1911. It houses a diverse group of environmental research and remote sensing/GIS programs. The survey also manages the 3,700-acre KU Field Station, established in 1947; it offers sites for faculty and student study in the sciences, arts, humanities and professional schools.

Image: Estimated flood depth grid near the city of Burlington, corresponding to the planned release of 28,600 cubic feet per second from John Redmond Reservoir on May 22, 2019. Credit: Jude Kastens.