State of the Climate in 2018 shows accelerating climate change impacts The physical signs and socio-economic impacts of climate change are accelerating as record greenhouse gas concentrations drive global temperatures towards increasingly dangerous levels, according to a new report from the World Meteorological Organization.

The WMO Statement on the State of the Global Climate in 2018, its 25th anniversary edition, highlights record sea level rise, as well as exceptionally high land and ocean temperatures over the past four years. This warming trend has lasted since the start of this century and is expected to continue.

These key climate change indicators are becoming more pronounced. Carbon dioxide levels, which were at 357.0 parts per million when the statement was first published in 1994, keep rising – to 405.5 parts per million in 2017. For 2018 and 2019, greenhouse gas concentrations are expected to increase further.

The WMO climate statement includes input from national meteorological and hydrological services, an extensive community of scientific experts, and United Nations agencies. It details climate related risks and impacts on human health and welfare, migration and displacement, food security, the environment and ocean and land-based ecosystems. It also catalogues extreme weather around the world.

“Extreme weather has continued in the early 2019, most recently with Tropical Cyclone Idai, which caused devastating floods and tragic loss of life in Mozambique, Zimbabwe and Malawi. It may turn out to be one of the deadliest weather-related disasters to hit the southern hemisphere,” said Mr Taalas.

“Idai made landfall over the city of Beira: a rapidly growing, low-lying city on a coastline vulnerable to storm surges and already facing the consequences of sea level rise. Idai’s victims personify why we need the global agenda on sustainable development, climate change adaptation and disaster risk reduction,” said Mr Taalas.

The start of this year has also seen warm record daily winter temperatures in Europe, unusual cold in North America and searing heatwaves in Australia. Arctic and Antarctic ice extent is yet again well below average.

According to WMO’s latest Global Seasonal Climate Update (March to May), above average sea surface temperatures – partly because of a weak strength El Niño in the Pacific – is expected to lead to above-normal land temperature, particularly in tropical latitudes.

The WMO Statement on the State of the Global Climate report will be formally launched at a joint press conference with UN Secretary General António Guterres, UN General Assembly President María Fernanda Espinosa Garcés and WMO Secretary-General Petteri Taalas at United Nations headquarters in New York. It coincides with a high-level meeting on Climate and Sustainable Development for All.

“The data released in this report give cause for great concern. The past four years were the warmest on record, with the global average surface temperature in 2018 approximately 1°C above the pre-industrial baseline,” Mr Guterres wrote in the report.

“These data confirm the urgency of climate action. This was also emphasized by the recent Intergovernmental Panel on Climate Change (IPCC) special report on the impacts of global warming of 1.5°C. The IPCC found that limiting global warming to 1.5°C will require rapid and far reaching transitions in land, energy, industry, buildings, transport and cities and that global net human-caused emissions of carbon dioxide need to fall by about 45% from 2010 levels by 2030, reaching net zero around 2050,” wrote Mr Guterres.

“There is no longer any time for delay,” said Mr Guterres, who will convene a Climate Action Summit at Heads of State level on 23rd September 2019. The State of the Climate report will be one of WMO’s contributions to the Summit. Mr Taalas has been appointed Chair to the Summit’s Science Advisory Group.

“It is one of my priorities as the President of the General Assembly to highlight the impacts of climate change on achieving the sustainable development goals and the need for a holistic understanding of the socio-economic consequences of increasingly intense extreme weather on countries around the world. This current WMO report will make an important contribution to our combined international action to focus attention on this problem,’’ said Ms Espinosa Garcés. 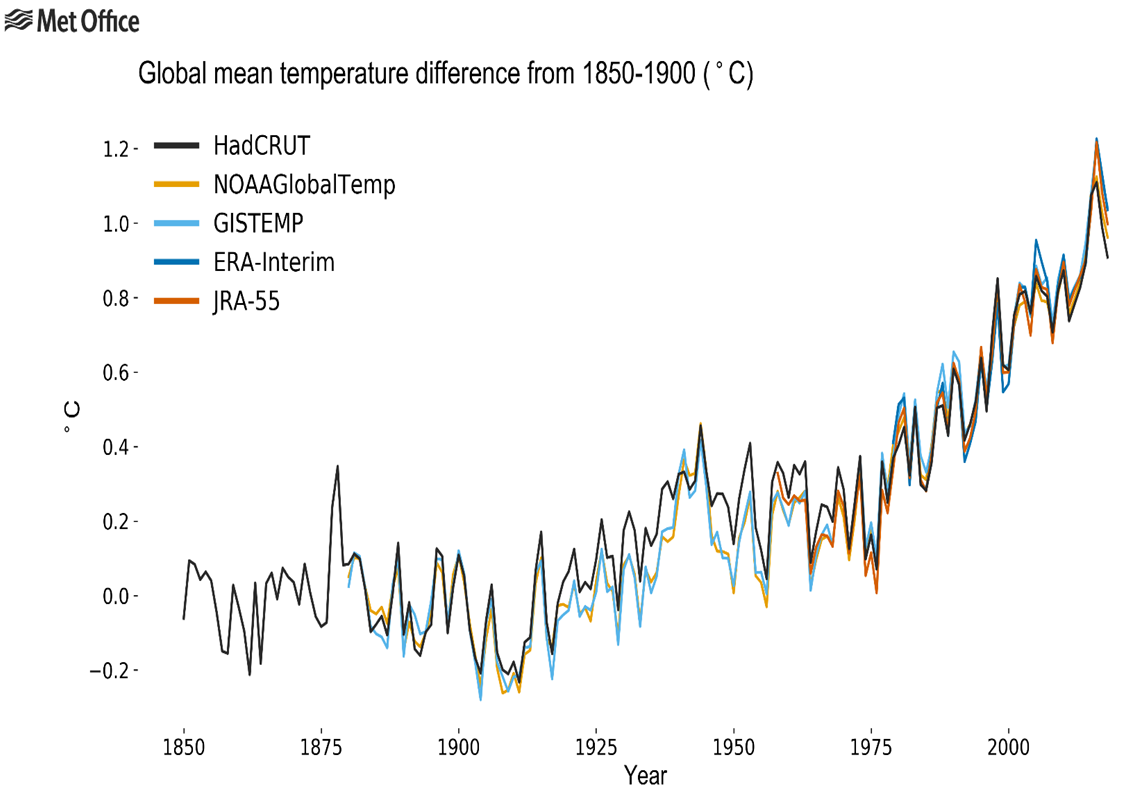 Climate impacts (based on input from UN partner agencies)

Hazards: In 2018, most of the natural hazards which affected nearly 62 million people were associated with extreme weather and climate events. Floods continued to affect the largest number of people, more than 35 million, according to an analysis of 281 events recorded by the Centre for Research on the Epidemiology of Disasters (CRED) and the UN International Strategy for Disaster Risk Reduction.

Hurricane Florence and Michael were two of fourteen “billion dollar disasters” in 2018 in the United States of America (USA). They triggered around US$49 billion in damages and over 100 deaths. Super typhoon Mangkhut affected more than 2.4 million people and killed at least 134 people, mainly in the Philippines.

More than 1600 death were associated with intense heat waves and wildfires in Europe, Japan and USA, where they were associated with record economic damages of nearly US$24 billion in USA. The Indian state of Kerala suffered the heaviest rainfall and worst flooding in nearly a century.

Food security: Exposure of the agriculture sector to climate extremes is threatening to reverse gains made in ending malnutrition. New evidence shows a continuing rise in world hunger after a prolonged decline, according to data compiled by United Nations agencies including the Food and Agriculture Organization and World Food Programme. In 2017, the number of undernourished people was estimated to have increased to 821 million, partly due to severe droughts associated with the strong El Niño of 2015–2016.

Displacement: Out of the 17.7 million Internally Displaced Persons (IDPs) tracked by the International Organization for Migration, over 2 million people were displaced due to disasters linked to weather and climate events as of September 2018. Drought, floods and storms (including hurricanes and cyclones) are the events that have led to the most disaster-induced displacement in 2018. In all cases, the displaced populations have protection needs and vulnerabilities.

According to UNHCR’s Protection and Return Monitoring Network, some 883 000 new internal displacements were recorded between January and December 2018, of which 32% were associated with flooding and 29% with drought.

Heat, air quality and health: There are many interconnections between climate and air quality, which are being exacerbated by climate change. Between 2000 and 2016, the number of people exposed to heatwaves was estimated to have increased by around 125 million persons, as the average length of individual heatwaves was 0.37 days longer, compared to the period between 1986 and 2008, according to the World Health Organization. These trends raise alarm bells for the public health community as extreme temperature events are expected to be further increasing in their intensity, frequency and duration.

Environmental impacts include coral bleaching and reduced levels of oxygen in the oceans. Others include loss of “Blue Carbon” associated with coastal ecosystems such as mangroves, seagrasses and salt marshes; and ecosystems across a range of landscapes. Global warming is expected to contribute to the observed decrease of oxygen in the open and coastal oceans, including estuaries and semi-enclosed seas. Since the middle of the last century, there has been an estimated 1-2 % decrease in the global ocean oxygen inventory, according to UNESCO’s Intergovernmental Oceanographic Commission (UNESCO-IOC).

Climate change has emerged as a significant threat to peatland ecosystems, because it exacerbates the effects of drainage and increases fire risk, according to UN-Environment. Peatlands are important to human societies around the world. They contribute significantly to climate change mitigation and adaptation through carbon sequestration and storage, biodiversity conservation, water regime and quality regulation, and the provision of other ecosystem services that support livelihoods.

Ocean heat: 2018 saw new records for ocean heat content in the upper 700 metres (data record started in from 1955) and upper 2000m (data record started in 2005), topping the previous record set in 2017. More than 90% of the energy trapped by greenhouse gases goes into the oceans and ocean heat content provides a direct measure of this energy accumulation in the upper layers of the ocean.

Sea level: Sea level continues to rise at an accelerated rate. Global Mean Sea Level (GMSL) for 2018 was around 3.7 millimetres higher than in 2017 and the highest on record. Over the period January 1993 to December 2018, the average rate of rise is 3.15 ± 0.3 mm yr-1 while the estimated acceleration is 0.1 mm yr-2. Increasing ice mass loss from the ice sheets is the main cause of the GMSL acceleration as revealed by satellite altimetry, according to the World Climate Research Programme global sea level budget group, 2018.

Ocean acidification: In the past decade, the oceans absorbed around 30% of anthropogenic CO2 emissions. Absorbed CO2 reacts with seawater and changes the pH of the ocean. This process is known as ocean acidification, which can affect the ability of marine organisms such as molluscs and reef-building corals, to build and maintain shells and skeletal material. Observations in the open-ocean over the last 30 years have shown a clear trend of decreasing pH. In line with previous reports and projections, ocean acidification is ongoing and the global pH levels continue to decrease, according to UNESCO-IOC. 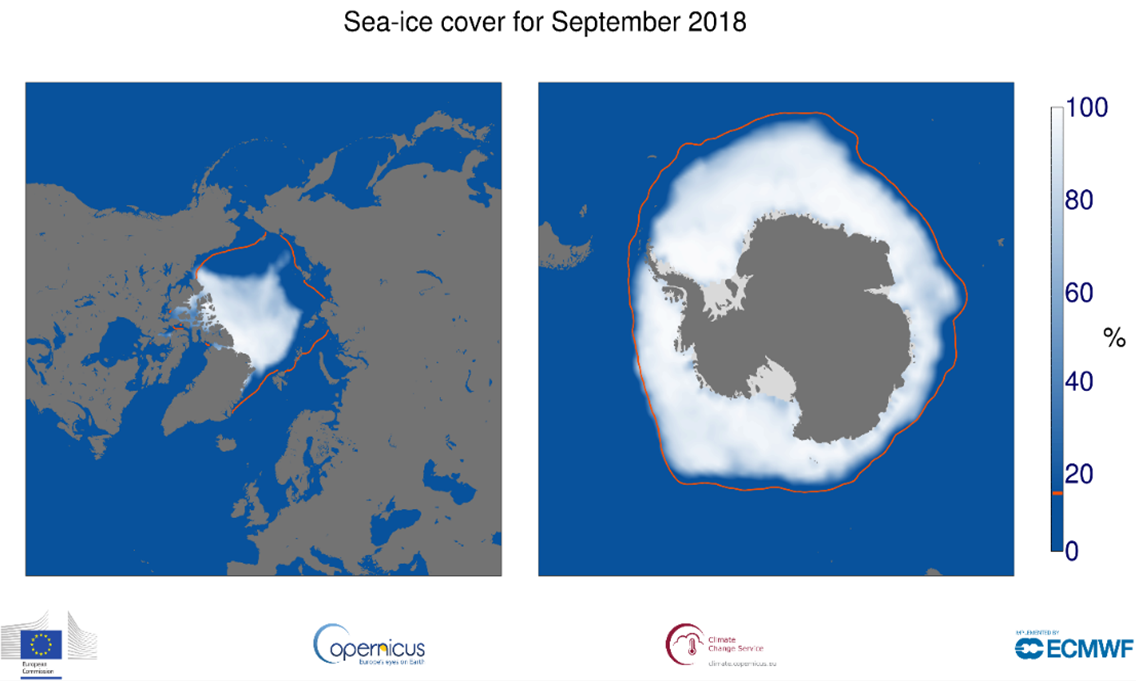 The Antarctic sea ice extent reached its annual maximum in late-September and early-October. After the maximum extent in early spring, Antarctic sea ice declined at a rapid rate with the monthly extents ranking among the five smallest for each month through the end of 2018.

The Greenland ice sheet has been losing ice mass nearly every year over the past two decades. The surface mass budget (SMB) saw an increase due to above-average snowfall, particularly in eastern Greenland, and a near-average melt season. This led to a gain in overall SMB, but had little impact on the trend over the past two decades with the Greenland ice sheet having lost approximately 3,600 gigatons of ice mass since 2002. A recent study also examined ice cores taken from Greenland, which captured melting events back to the mid 1500s. The study determined that the recent level of melt events across the Greenland ice sheet have not occurred in at least the past 500 years.

Glacier retreat: The World Glacier Monitoring Service monitors glacier mass balance using a set of global reference glaciers with more than 30 years of observations between 1950 and 2018. They cover 19 mountain regions. Preliminary results for 2018, based on a subset of glaciers, indicate that the hydrological year 2017/18 was the 31st consecutive year of negative mass balance.