UPLOAD YOUR CONTENT
Research briefs
Source(s)
Center for Climate and Security, the

The security implications of climate change emerged as an important area of concern in the mid 2000s in both policy circles and academia. Since then, there has been much research exploring causal pathways between climate phenomena and violent conflict, often with mixed and complex results.

Vulnerability is not determined by physical exposure alone. The factors that make a country vulnerable to large-scale conflict—such as exclusive political institutions and low economic and human development—are similar to those that make a state vulnerable to climate change-related extremes.

Regardless of whether fragility is caused by climate hazards, countries that have fragile governments are less likely to respond effectively to them. Climate exposure will make ending or avoiding conflict even harder due to the strained capacities and resources of governments in these states. Humanitarian emergencies are likely to be more severe in states with fragile governments or strained state-society relationships.

This report offers a way for global audiences with an interest in climate and security to identify places of high concern. We hope our report generates a conversation about places that the international community should focus on most to prevent conflict and humanitarian emergencies, helps shore up local resilience, and bolsters more inclusive governance. This is particularly important for global audiences with limited resources.

To follow up on the 2015 report for the G7’s A New Climate for Peace, USAID tasked us to provide a global portrait of compound climate and fragility risks.

To capture climate exposure, we use data on historical exposure to climate hazards as our point of departure, with an index that combines indicators of cyclones, floods, wildfires, rainfall anomalies, chronic water scarcity, and low elevation coastal zones (see table below). For those familiar with the Climate Change and African Political Stability (CCAPS) or Complex Emergencies and Political Stability in Asia (CEPSA) programs, these indicators correspond to those in our physical exposure basket in our vulnerability mapping work. The exposure maps are global but capture variation within countries. 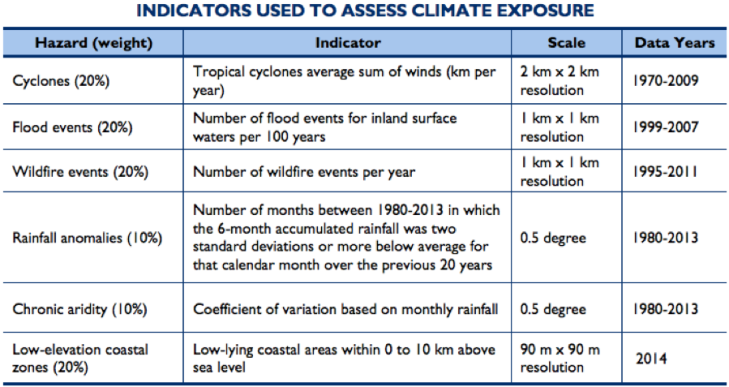 We measure fragility with a set of indicators of state effectiveness and legitimacy in four key spheres: political, security, economic, and social (see table below). We combine these to produce country fragility scores that we can track over time. This approach builds upon USAID’s internal methods and framework for analyzing fragility. 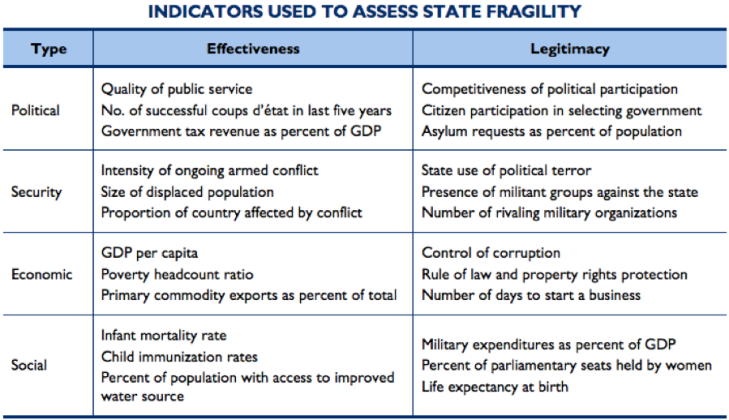 Which places should we be worried about?

With different mapping and data visualization techniques, we estimate combined climate and fragility risks. For example, the map below shows climate exposure risks in countries with the highest levels of fragility. Darker areas within each country show areas of highest exposure. These countries with the highest fragility are concentrated in Sub-Saharan Africa though a number of other highly fragile countries like Iraq, Afghanistan, Pakistan, and Myanmar (Burma) also contain pockets of high exposure (see map below). 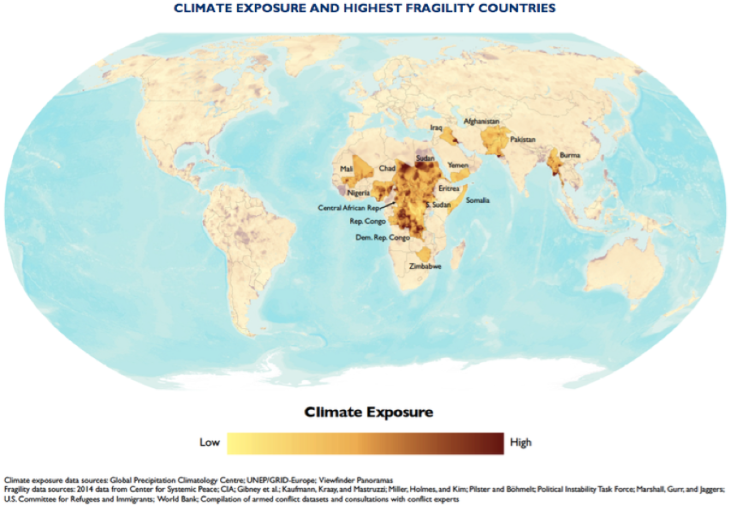 An alternative version of this global map depicts all levels of exposure and fragility risks on the same map with color ramps for both dimensions (see map below). 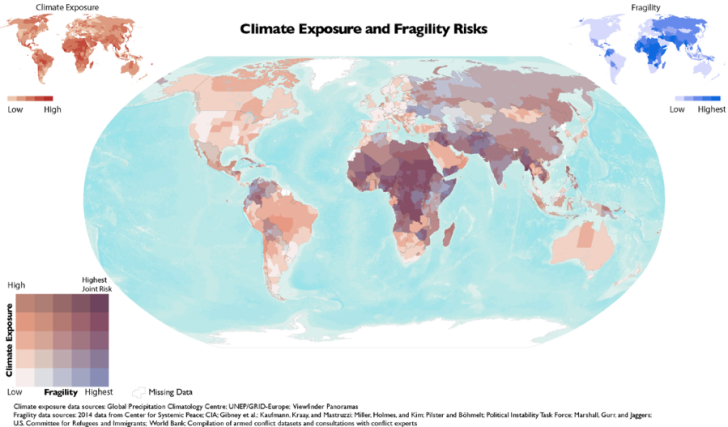 In a majority of highly fragile states - 26 of the 39 states with the highest or high fragility - more than one million people and/or more than 10 percent of the population live in high exposure areas. These states are mostly located in Sub-Saharan Africa, followed by a few in the Middle East and North Africa (MENA) region, a few in South and Southeast Asia, and one in Latin America (see table below). 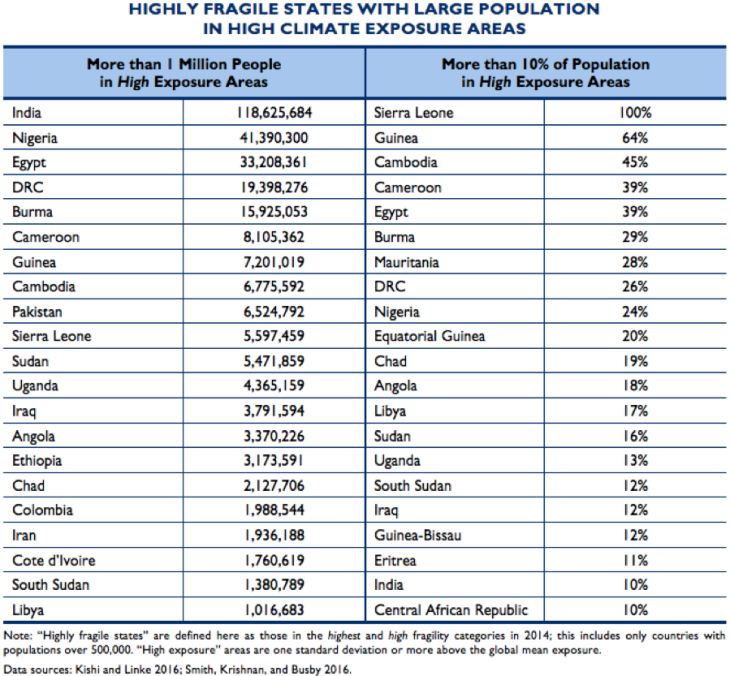 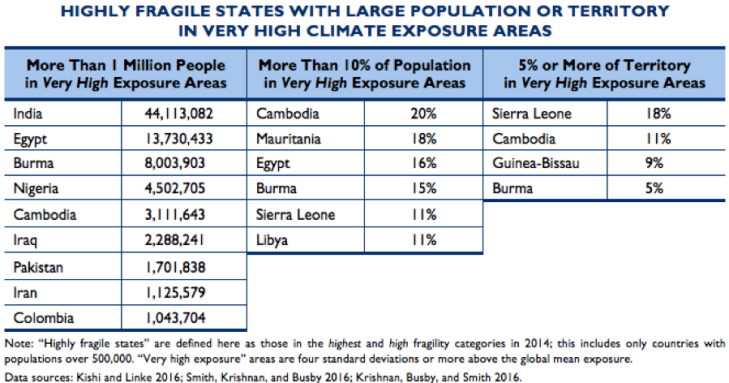 Our population analysis also reveals countries facing high climate risks that are not as visible in the compound risk maps and analysis. For example, small, low-lying island nations are difficult to see on a global map, and some have such low population numbers that they are not tracked in indicators used to create fragility rankings. These countries could thus be missed in the compound risk analysis.

The table below shows countries and territories with the highest share of their populations facing very high climate exposure. A number of low-lying island countries like Kiribati, the Marshall Islands, and the Maldives feature prominently in this list due to the existential challenge climate change poses for them.

The table below shows countries and territories with large numbers of people living in very high exposure areas, including states like the United States and China that face very high population risks. These findings suggest that, while less fragile, some of the richest countries in the world also face climate challenges. This is consistent with what we have observed over the last year, with the United States experiencing 16 separate billion-dollar weather events and a record $300 billion in damages last year alone, driven largely by Hurricanes Harvey, Irma, and Maria. This year, the United States has already faced 11 separate billion-dollar weather events as of this writing, with the latest damage from Hurricanes Florence and Michael not yet tallied.

This study set out to identify highly fragile states with high exposure to multiple climate hazards. However, a few highly fragile states face high exposure to a single climate hazard to a degree that risks exceeding their capacity to address it. These states do not show up as highly exposed in terms of the multi-hazard climate exposure emphasized in this study, yet this is an additional aspect of compound fragility-climate risks that policy makers should consider. These states include Mali, Niger, Republic of the Congo, and Yemen.

On the fragility side, the study provides global maps depicting overall fragility as well as patterns of fragility across key state features (effectiveness and legitimacy) and spheres (political, security, economic, and social). The report also tracks trends in fragility for each country, classes of countries, and regions over time.

Legitimacy deficits have been steadily growing over time in today’s fragile states (i.e., those with some, moderate, high, or highest fragility). This trend is even more pronounced for highly fragile states that also face high climate exposure. Further, in states experiencing the highest levels of fragility today, both legitimacy deficits and effectiveness deficits grew over the 15-year study period (see table below).

This study includes three country briefs that explore how compound fragility-climate risks take shape in different regions of the world, with reports for Nigeria, Bangladesh, and Colombia. These country briefs draw on the study’s data and findings to show how the global data can be translated to country-level analysis but are not based on additional fieldwork.

Each brief identifies the locations and populations facing the greatest exposure risks and the specific climate risks they face; identifies current fragility dynamics, the state’s capacity to respond to public needs, and aspects of fragility that present the greatest risks to stability; and describes how the state’s compound fragility-climate risks heighten insecurity in the country. We hope these briefs help people analyze how compound fragility-climate risks unfold in different contexts and reveal where there may be opportunities and focal points for intervention.

Our central aim was to develop maps and metrics to identify the intersection of climate exposure and state fragility. This prompted some discussion of potential interventions that could be deployed to address the particular challenges and opportunities arising from these compound risks.

For highly fragile countries like Nigeria, with extensive territorial exposure and large numbers of people facing high climate risks, policy approaches will likely be systemic and require significant mobilization of finance to help address large-scale societal risks. Other highly fragile countries like Colombia appear to face more localized climate risks in high-density, high-exposure places such as Colombia’s coastal city of Barranquilla. More targeted interventions to address flood risks and state mismanagement of those risks in densely populated areas might be more appropriate in such circumstances.

Though the country has improved its response to and preparation for these challenges, its high exposure both in terms of the absolute number of people and share of the population suggest that its status has to be closely monitored on both the exposure and governance sides. Bangladesh has at times experienced contentious relations with international donors regarding climate preparedness, so new partners need to be aware of this context and history as well.

Efforts to construct a global portrait of overlapping climate exposure and fragility risks require choices about what indicators to include. Lack of data and computer processing power complicate the task. In this study for example, we could not include heat waves in our global exposure measure, though our prior regional exposure maps have included them. This is one important area where such global exposure measures could be further developed in the future. Also, our findings are not triangulated with projections of future climate change impacts, though we recognize that this would be an important undertaking.

In all of our mapping projects, we encourage readers to use maps with caution. Maps and indicators do not tell the full story. They require country-specific expertise and ground-truthing for further validation and more fine-grained analysis of the geography of exposure and the realities of state fragility. Nonetheless, we think this portrait and the diverse measures we have devised to represent facets of exposure and fragility offer fresh insights.

Read the original story here
Share this
Attachments
Download file
Related information
Related links
More about the nexus between fragility and disasters
The Sendai Framework for Disaster Risk Reduction as a tool for conflict prevention
When disasters and conflict collide
The next frontier for disaster risk reduction: Tackling disasters in fragile and conflict-affected contexts
A new climate for peace: taking action on climate and fragility risks
Keywords
Themes
Climate Change
Risk Identification & Assessment
Fragility and conflict