Geneva/Beira, Mozambique, 29 May 2019 (WMO) - The devastation caused by cyclones Idai and Kenneth which hit Mozambique within the space of a few weeks is a wake-up call about more high-impact tropical cyclones, coastal flooding and intense rainfall linked to climate change, according to the World Meteorological Organization (WMO).

“The two cyclones are a wake-up call that Mozambique needs to build resilience,” WMO Secretary-General Petteri Taalas said in a message to an international pledging conference to secure support for reconstruction.

“Future sea level rise will exacerbate the impact of storm surge on coastal regions, raising concerns about flooding from the sea, particularly for low lying cities as Beira,” said Mr Taalas. This raises major concerns regarding Mozambique’s vulnerability to floods from both rivers and sea. 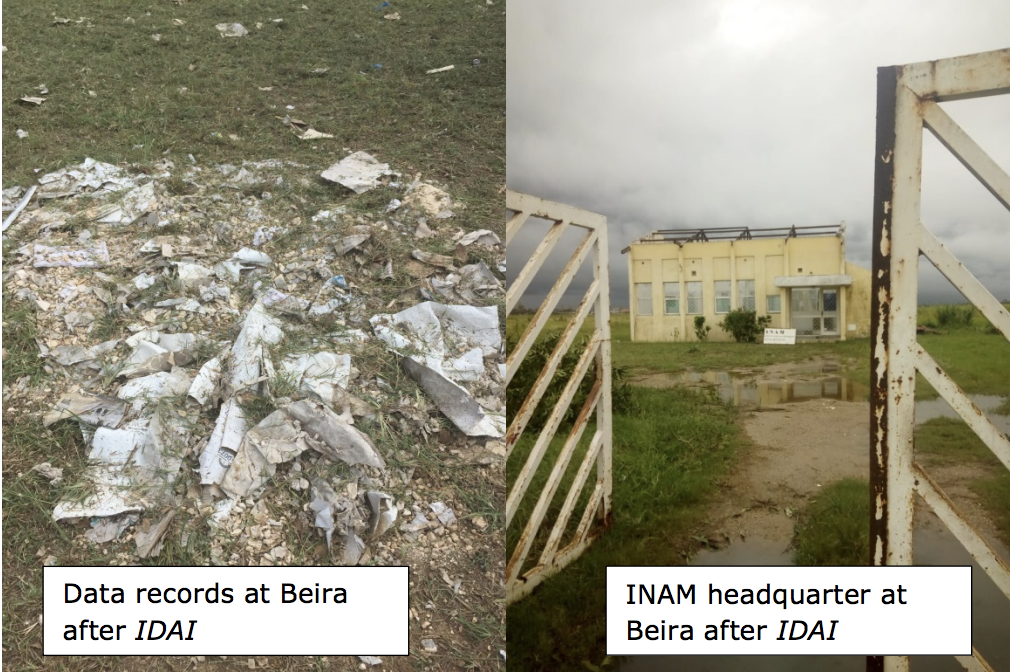 The report from the international team of meteorologists and hydrologists, headed by WMO’s Filipe Lúcio, will be presented to an international pledging conference for Mozambique scheduled for 1 June in the coastal city of Beira.

The fact-finding team said that investment of nearly US$ 27 million is needed for the meteorological and hydrological sector. This includes reconstruction, rehabilitation and modernization of infrastructure and equipment, land surveys for flood risk mapping and satellite rainfall estimation, improved database management systems, training on the latest forecasting products, improved standard operational procedures, and better communications tools.

Idai made landfall in the vicinity of Beira on 14 March at Category 4 strength, provoking one of the worst weather-related disasters to hit the southern hemisphere. Months’ worth of rain fell in a matter of hours.

The humanitarian consequences were huge. The cyclone and subsequent flooding caused the death of more than 600 people, injured an estimated 1600, affected more than 1.8 million and caused an estimated US$ 773 million in damages to buildings, infrastructure and agriculture.

“In times of floods, Mozambicans seek safety on roofs of buildings. But the ferocity of Idai’s winds blew the roofs away. The magnitude of the cyclone, the size of the storm surge and the extent of the flooding overwhelmed years of work by authorities in Sofala to increase community resilience to floods,” said Mr Lucio, who used to head Mozambique’s national meteorological service.

“It is a salutary warning about the future scale of the combined challenges from urbanization and climate change-related sea level rise and extreme weather. This will necessitate much greater emphasis on improved land use, urban and floodplain planning,” said Mr Lucio.

The fact-finding team’s visit coincided with tropical cyclone Kenneth, which made landfall on 25 April in Cabo Delgado province as the most intense tropical cyclone ever known to have hit the area.

The WMO mission focussed on Cyclone Idai, especially in terms of damages to hydro-meteorological equipment and institutional coordination and collaboration involving the meteorological, hydrological and disaster management services. However, its general conclusions are meant to inform plans and investments in strengthening the Early Warning System in a multi-hazard approach, and disaster risk management in the country, particularly during reconstruction to ensure building back better and overall strengthening of resilience.

With Idai and Kenneth, the tropical cyclone warnings issued through WMO’s operational network – via its Regional Specialized Meteorological Centre La Reunion (Météo-France) were of good quality. Flood warnings were challenging, an area where special focus needs to be put.

“The critical problem however, was understanding the risk associated with the warnings, understanding what each person needed to do and limited response capabilities,” said the report.

The communication of messages needs to be simplified and should include indication of potential impacts. Education and awareness raising should be permanent, the mission found.

Early warning can only be effective if complemented by effective disaster management practices. There is a need for:

The WMO team identified major weaknesses on preparedness, emergency coordination and response, including the following:

Mozambique is downstream of nine major river basins. It is prone to devastating impacts of floods but can also experience low-flows in rivers during drought due to water use upstream, exacerbating the impacts of droughts.

The biggest floods recorded recently were in 2000, when weeks of heavy rain exacerbated by tropical cyclone Eline caused the death of 700 people and affecting 2 million people.

With a coastline of 2700 km in the South West Indian Ocean, Mozambique is hit by a tropical storm or cyclone every two years on average – although Madagascar often acts as a buffer.

Climate change projections indicate a global decrease in numbers of tropical storms and cyclones. However it is projected that there may be increases in their maximum intensities and associated rainfall. Future sea level rise will exacerbate the impact of storm surge on coastal regions, assuming all other factors equal.

For the Province of Maputo, which has never suffered from direct hit of a tropical storm or tropical cyclone, and the Province of Gaza which was hit just once (cyclone Domoina in 1984) the likelihood of direct impact over these southern areas may increase over the next decades.