The increasing size and number of wildfires can lead to dire situations in which emergency managers must shift their focus from getting everyone out to simply minimizing human casualties.

Assistant professor Dapeng Li of South Dakota State University’s Department of Geography and Geospatial Sciences is working with University of Utah researchers to help emergency managers adjust their evacuation plans to help prevent loss of human life in such dire scenarios. Li uses computer models to estimate how fast a fire will travel and determine how much time residents need to evacuate.

In South Dakota, for instance, the Schroeder Fire near Rapid City forced the evacuation of residents in more than 400 homes and closed highways leading to Mount Rushmore. Everyone got out safely, but the state of emergency declared because of the March 29 fire, which burned more than 2,000 acres, is in effect until June 1 due to severe drought conditions.

Current evacuation plans are based on previous assumptions about wildfires and residents’ behavior but do not account for these more unpredictable wildfire conditions, Li explained. Therefore, the researchers have proposed a framework for simulating dire scenarios in which there is less time to evacuate an area than is required.

Professor Thomas Cova at the University of Utah’s Department of Geography, said, “The world is dealing with situations that exceed our worst-case scenarios. Basically, we’re calling for planning for the unprecedented, which is a tough thing to do.”

Their research, published in Natural Hazards Review, shows that minimizing losses during dire scenarios involves elements that are not represented in current simulation models.

A dire scenario can result when the fire ignites close to a community, as was the case with the Schroeder Fire, Li explained. In addition, he pointed out, “More people have also begun working remotely from home during the pandemic, which then allows them to move out of large cities into rural areas.”

According to an article in the Rapid City Journal, Black Hills realtors and builders report increased demand for housing due to people moving to the state. “These rural communities typically have fewer resources and face challenges rapidly evacuating a larger number of residents in dire emergency situations,” Li said.

In remote areas, residents may not receive timely warnings due to poor cellphone coverage, lack of reliable internet or low subscription rates to reverse 911 warning systems. In addition, officials may delay decision-making to avoid unnecessarily disrupting the community, which can lead to last-minute evacuation orders. This is especially problematic for elderly residents and those with disabilities who need assistance due to mobility issues.

Studying and modeling dire scenarios is necessary to improve the outcomes of unprecedented changes in fire occurrence and behavior. To do this, the researchers proposed to use an index based on the total evacuation time and the lead-time to represent the direness of a scenario. This direness score can be further translated to a direness category ranging from “routine” to “extremely dire.” Furthermore, the direness category can change with environmental factors such as wind direction and speed.

The idea is “to simplify a very complex process into directives that are easy to interpret and communicate,” Li explained. “For these dire situations, you need to have a Plan B,” which can include creating fire shelters and safety zones inside of a community to protect residents who cannot get out, while reducing traffic congestion for others who can.

Because this study is the first attempt to develop a simulation framework for these dire scenarios, more research is needed to account for the unpredictable elements that create increasingly catastrophic wildfires.

One of the challenges is getting reliable data on human movement. In particular, Li needs “human mobility data on where people are at each time step.” The best way to do that is getting precise cellphone locations, but that is difficult because of privacy issues. However, Li said, “Even coarse cellphone location data at the cellphone tower level would be useful for improving the evacuation model.” 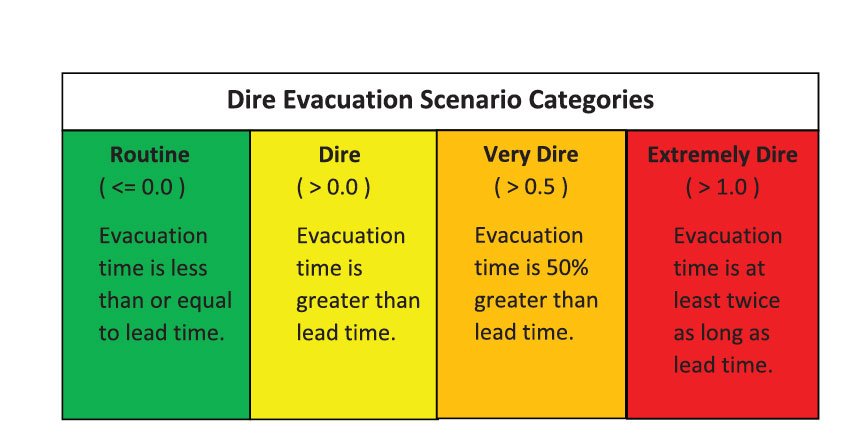 An index based on the total evacuation time and the lead-time is used to calculate the direness of a scenario and that score then is further translated into these categories. /University of South Dakota (USD)