Eyeing explosive ash clouds from above and below 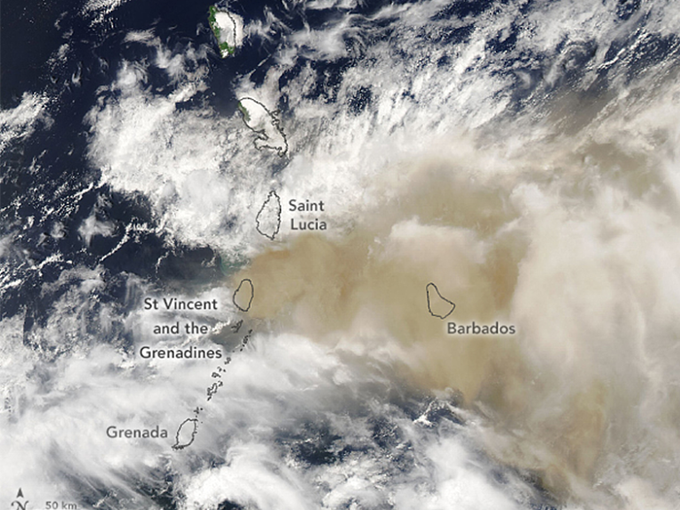 An explosive eruption at Soufrière St. Vincent on 9 April propelled volcanic gas and ash into the atmosphere. The plume then spread east, toward Barbados. Credit: NASA Earth Observatory images by Lauren Dauphin, using Landsat data from the U.S. Geological Survey and MODIS data from NASA EOSDIS LANCE and GIBS/Worldview

Sparkling marine waters typically mirror breathtakingly blue skies in St. Vincent and the Grenadines, islands of the Lesser Antilles arc in the Caribbean. On Friday, 9 April, azure turned gray as volcanic ash shot upward from La Soufrière, the volcano on the northern end of the main island of St. Vincent. At least a dozen explosive events have occurred since then.

In Wisconsin, more than 3,200 kilometers away, NOAA scientists led by Mike Pavolonis keep an eye on Soufrière St. Vincent and Earth’s other 1,500 active volcanoes through the Volcanic Cloud Analysis Toolkit. Nicknamed VOLCAT, it comprises a complex set of software that rapidly ingests satellite data in near-real time to automatically detect and track volcanic ash clouds in the atmosphere, which, Pavolonis said, helps mitigate ash-related aviation hazards.

“VOLCAT looks at all the data, all over the world, all the time.”

Head in the Clouds

Pavolonis has spent most of his career looking at clouds, and 15 years ago, he became especially fascinated with those produced by volcanic eruptions. And so began the VOLCAT project.

Today, VOLCAT uses five low Earth orbit satellites and four geostationary satellites. The low Earth orbit satellites circle Earth to “provide a snapshot of a given location a couple of times a day,” said Pavolonis. Their sophisticated sensors can identify radiation signatures specific to ash, helping differentiate volcanic clouds from regular, water-rich meteorological ones. However, some ash clouds—like those from Soufrière St. Vincent—don’t have those distinct compositional characteristics because often, “they’re a mixture of volcanic ash, ice, liquid water, and volcanic gases,” he said.

In those cases, VOLCAT tracks how quickly clouds cool, said Schneider. “Volcanic clouds [are] like a thunderstorm with a rocket at the bottom,” he explained. As an eruption injects these hot clouds into the cold upper levels of the atmosphere, the clouds cool rapidly compared to regular thunderstorms. To capture this cooling, VOLCAT relies on data from geostationary satellites, including NOAA’s GOES-R satellites (Geostationary Operational Environmental Satellites). These satellites remain fixed in space relative to Earth, focusing on a single swath of the globe.

A geostationary satellite can image a large area within its surveillance region, with most volcanoes observed at least every 15 minutes if not more often, Pavolonis explained. Alternatively, these nimble satellites can also focus on much smaller areas and get many more images as a function of time, sometimes as often as every 30 seconds. For Soufrière St. Vincent, at the time of this writing, NOAA programmed one of the GOES-R satellites to capture imagery every minute to track the ongoing eruption, he said.

VOLCAT’s machine learning algorithm, said Pavolonis, “helps whittle down the millions of candidate pixels into the very small subset that could possibly be volcanic ash.” With additional automated processing, VOLCAT determines ash cloud location and more detailed metrics, such as ash cloud height. This quantitative information overlies unprocessed satellite data that human brains can easily interpret, said Pavolonis. Human experts then filter the alerts to eliminate false notifications, which does happen considering VOLCAT processes more than a terabyte of data per day, he said. Nevertheless, the rapidity with which VOLCAT sifts through incoming satellite data, especially during an ongoing eruption, helps analysts focus on where ash might be. For example, he explained, with Soufrière St. Vincent’s 1-minute imagery, “the turnaround time between [image acquisition and alert generation was] less than 2 minutes.”

For now, said Schneider, VOLCAT will continue to provide information about which volumes of airspace aircraft should avoid, and the message will continue to be “Don’t fly in this box.” But eventually, he explained, the International Civil Aviation Organization wants to move toward more detailed quantitative spatial information, especially for ash concentrations. VOLCAT, he said, provides the foundation for that ambition.

VOLCAT could help the aviation industry evaluate taking “a more risk-based approach, as opposed to a zero-tolerance approach,” when it comes to ash.

With such information, the aviation industry could “take a more risk-based approach, as opposed to a zero-tolerance approach,” when it comes to ash, said Pavolonis, because “[they] now know more about the impacts of volcanic ash on jet engines.” Some airlines may choose to fly through small amounts of ash, though a thick, fresh volcanic ash cloud will always remain a major hazard through which no one would fly, he said.

Even with an eye to future needs of the aviation community, Pavolonis noted that “we are in a golden era because it was only less than 10 years ago [that] we were happy to get an image every 15 minutes.” New satellites, he said, have been a game changer, and Soufrière St. Vincent illustrated why. “We [imaged Soufrière St. Vincent’s] clouds when they were on their way up,” Pavolonis said, and “that type of capability is really important.”