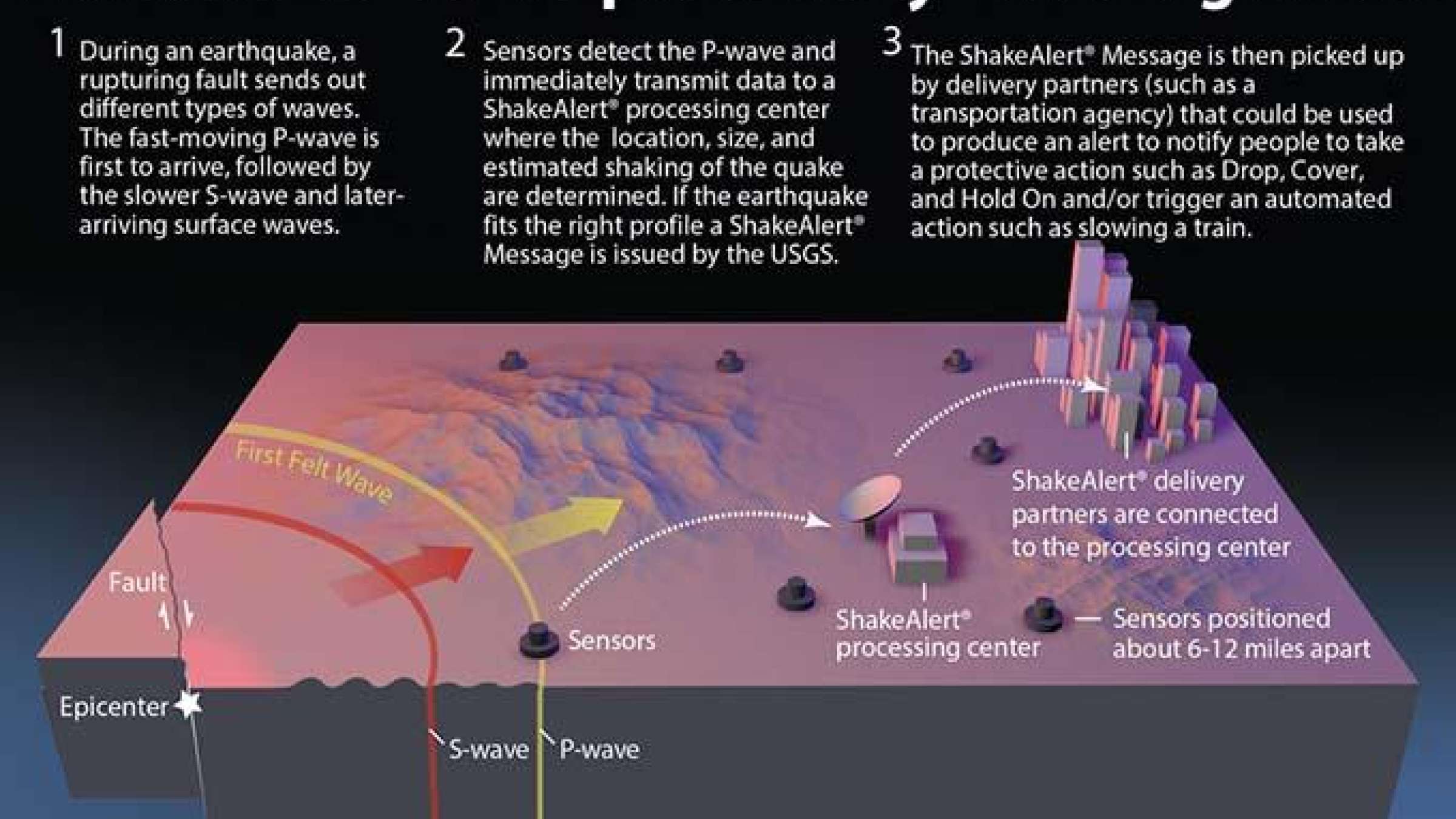 Earthquake early warning systems like ShakeAlert work because an alert can be transmitted almost instantaneously, whereas the shaking waves from the earthquake travel through the shallow layers of the Earth at speeds of one to a few kilometers per second (0.5 to 3 miles per second) / USGS

After 15 years of planning and development, the ShakeAlert earthquake early warning system is now available to more than 50 million people in California, Oregon and Washington, the most earthquake-prone region in the conterminous U.S.

Today’s debut of ShakeAlert-powered public alerting to mobile phones in Washington completes the U.S. Geological Survey and partners’ West Coast rollout of this mode of alert delivery to the public that began with California in 2019 and expanded to Oregon in March 2021. People in these three states can now receive alerts from FEMA’s Wireless Emergency Alert system, third-party phone apps, and other technologies.

"USGS science is the backbone of hazard assessment, notification, and response capabilities for communities nationwide so they can plan for, and bounce back from, natural disasters,” said David Applegate, Associate Director for Natural Hazards Exercising the Delegated Authority of the USGS Director. “Systems powered by ShakeAlert can turn mere seconds into opportunities for people to take life-saving protective actions or for applications to trigger automated actions that protect critical infrastructure. An effort like this takes the dedication, ingenuity and hard work of dozens of partners with the same vision, and the USGS is proud to have been part of a collaborative team that made this robust public safety system available for millions of citizens on the West Coast."

The ShakeAlert system relies on sensor data from the USGS Advanced National Seismic System. ANSS is a USGS-facilitated collection of regional earthquake monitoring networks operated by partner universities and state geological surveys on the West Coast and throughout the nation. USGS works closely with ANSS partners and state emergency management agencies on the system’s development as well as public communication, education and outreach. ShakeAlert is a new ANSS tool in the USGS risk reduction toolbox.

The ShakeAlert earthquake early warning system can save lives and reduce injuries by giving people time to take protective actions like drop, cover and hold on before potentially dangerous earthquake shaking arrives at their location. In addition to supporting public alerts to mobile phones, ShakeAlert system data has, since late 2018, been used to develop applications that trigger automated actions. Automatic actions can be used to slow down trains to prevent derailments, open firehouse doors so they don’t jam shut and close valves to protect water and gas systems.

This innovative technology will continue to improve over time with the addition of more seismometers to the network, by expanding alert delivery area and by improving messaging speeds.

To learn more about the ShakeAlert system, read this feature story. 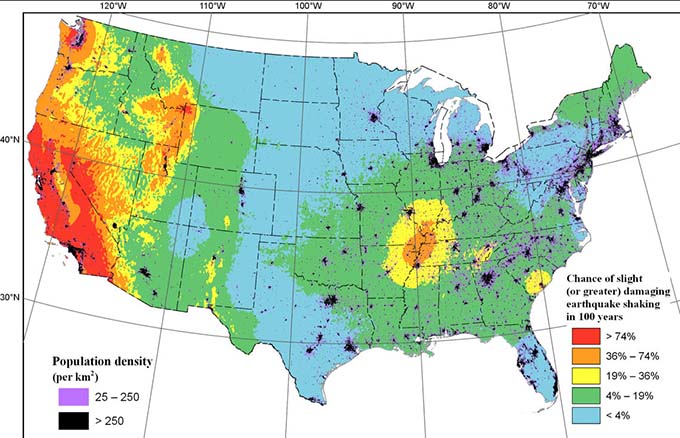 Image shows the chance of damaging earthquake shaking in 100 years from the 2018 National Seismic Hazard Map. Earthquakes are a national problem with more than 143 million people as risk of potentially damaging shaking in the United States. Fifty million of those people are on the West Coast of the United States in California, Oregon, and Washington. /USGS