Dams as disasters: Are the dams in Arunachal Pradesh aggravating flood damages in Assam? 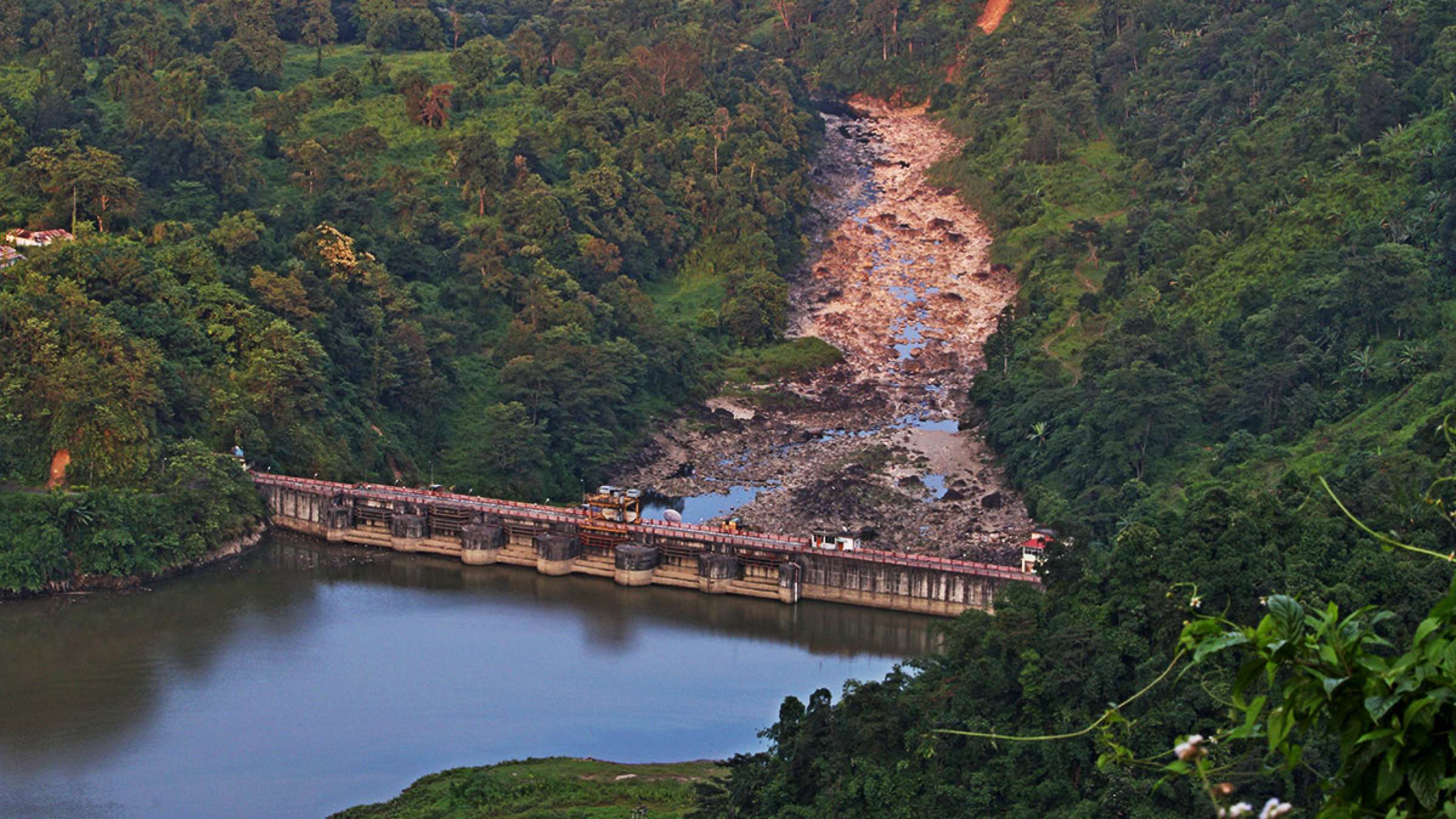 Annual floods caused by the Himalayan river systems are integral components of the global hydrological cycle. So are Assam’s annual inundations. The unique fluvial landscape accounts for this expected phenomenon. There is ample scientific evidence arguing that the state has historically relied upon the rising waters of the Brahmaputra to bring in sediments and other essential nutrients to rejuvenate its floodplains. This phenomenon enabled an important supporting service of the ecosystem in the form of soil formation, as also a provisioning service in the form of enhancing soil fertility. Over time, structural interventions in the form of dam projects and embankments have cropped up on its tributaries to serve short-term economic interests, without keeping long-term ecological concerns in mind. With reductionist engineering goals of “training the river” without understanding the course and the flow regimes, these structural interventions raised the river beds, impeded the width of the flow regime during high monsoons, and led to the rising water levels of both, the Brahmaputra and its tributaries. This man-made phenomenon transformed an annual ecological phenomenon that provided ecosystem services to one.

With reductionist engineering goals of “training the river” without understanding the course and the flow regimes, these structural interventions raised the river beds, impeded the width of the flow regime during high monsoons, and led to the rising water levels of both, the Brahmaputra and its tributaries.

This article looks into the major factor contributing to the flood disaster in Assam: The multipurpose projects of Arunachal Pradesh. Hydroelectric projects like the Subansiri Lower Hydroelectric Project and the Dibang MPP, for instance, were envisioned with flood control as one of their several uses. Though the Ranganadi Dam in Arunachal Pradesh stands as a multipurpose project which seeks to harness electricity from the Ranganadi river and serves as a tourist spot, it does not carry a flood protection aspect. The article seeks to point out that irrespective of whether these dams carry or do not carry a flood protection aspect, flood prevention as a strategy simply stands as a mere illusion.

Slated to become operational next year, the Subansiri Lower Hydroelectric Project along the Assam–Arunachal border has had a tumultuous history marked by massive anti-dam protests held by political factions such as the Asom Jatiyatabadi Yuba Chatra Parishad (AJYCP) and the All Assam Students’ Union (AASU). In 2021, the overflowing Subansiri River went on to submerge the SLHEP’s powerhouse by breaking through the dam’s guard walls. The breaching of the guard wall instigated the fear of floods in the minds of downstream settlers and sparked protests in the Dhemaji, Biswanath, and Lakhimpur districts of Assam, which are known to share its borders with Arunachal Pradesh. The AASU-led protest was carried out about the National Hydroelectric Power Corporation’s incompetence in ensuring the project’s protection measures.

The planning stage of the Subansiri Lower project itself suffers from several limitations. The entirety of the Himalayas falls under a tectonically active zone, as a result of which the SLHEP infrastructure, like any other dam infrastructure in the region, stands vulnerable to natural calamities. What remains a matter of great concern is that the dam’s seismic design parameter remains inadequate in withstanding earthquakes above 8.5 magnitudes. The safety and security issues surrounding the dam’s planning have rightly caused concerns in the downstream areas and have accentuated fears regarding the possible collapse of the SLHEP due to natural calamities, as the project’s location is highly susceptible to landslides and floods.

The Dibang Multipurpose Project (Dibang MPP) stands as another symbol of India’s ambitious hydroelectric targets—it is estimated to become the tallest concrete gravity dam in the world following its completion. Since the dam’s Environmental Impact Assessment and other dam-related proposals put forward by the Arunachal government were replete with loopholes, the project received environmental clearance only after a long wait of seven years. Other factors such as the unavailability of sufficient ground data, based on a yearly analysis and modelling of the Dibang river’s topography, fail to overcome the hurdle of identifying and classifying natural hazard risks.

The entirety of the Himalayas falls under a tectonically active zone, as a result of which the SLHEP infrastructure, like any other dam infrastructure in the region, stands vulnerable to natural calamities.

Communities in downstream Assam stand to be affected by this 3000 MW project. Though flood moderation remains a primary objective of the project, it is doubtful if the dam has adequate storage capacity. There is also a lack of any available data on the dam’s storage capacity. Further, if the Dibang MPP was to meet a similar fate as that of the DVC reservoirs in terms of silt accumulation, the dam’s water holding capacity would diminish even further. Thus, one cannot completely bracket off the possibility that the Dibang MPP will fail to meet its purpose of flood prevention in downstream Assam.

In addition to torrential monsoon rains, the unexpected release of excess water from the Ranganadi dam last year went on to create heavy flooding in downstream areas like the Lakhimpur district of Assam. The fact that the Ranganadi dam has gone on to exacerbate the annual inundation that takes place in Lakhimpur is something that has received confirmation in the views of its sitting MP Pradhan Baruah, who also requested CM Himanta Biswa Sarma to take up this issue with the Ministry of Power.

The catastrophe in Kerala reveals the importance of following dam safety regulations. In 2018, factors like the sudden release of water and high reservoir storage worsened the flood situation in the state. Coupled with this, the lack of proper follow-up action in terms of evacuating people to safer locations further aggravated the situation. These are lessons that can be learnt from the Kerala floods but it seems history is likely to repeat itself in the Ranganadi dam’s context. In April 2022, NEEPCO released a circular stating that it shall not be responsible for any losses people face during flood events triggered by the Ranganadi dam’s rising water levels and as per the Assam State Disaster Management Authority, they remained unaware of the circular for about a week from its date of issue. This stands in clear violation of Section 36 (b) of the Dam Safety Act which necessitates that dam authorities must consult all disaster management agencies in the areas likely to be affected, to ensure transparency and assuage fears about dam safety.

Arunachal Pradesh plans to harness the power of flows and generate an uninterrupted supply of electricity, thereby, becoming power surplus like its neighbours—Sikkim, Tripura, and Mizoram.

Large quantities of water stored in Arunachali dams have intensified the risk of flooding, against the purpose of regulating and minimising the risk of floods. Though these dams have gone on to release flood-inducing volumes of water, they are also packaged as “multi-purpose projects” with hydropower generation often being the primary purpose. Arunachal Pradesh plans to harness the power of flows and generate an uninterrupted supply of electricity, thereby, becoming power surplus like its neighbours—Sikkim, Tripura, and Mizoram. A supply-oriented paradigm has guided policymaking in Arunachal Pradesh, wherein the quest for hydropower has taken precedence over sustainable water management practices.

Inadequate or the lack of EIAs

The situation is further complicated by the lack of sediment data and inadequate EIAs (Environmental Impact Assessment). The Dibang MPP, for instance, faced back-to-back rejections from the Forest Advisory Committee in 2013 and 2014 after failing to meet essential environmental and social concerns. Its EIA report failed to take into consideration critical components like the project’s greenhouse gas emissions. The SLHEP’s EIA report was based on data gathered at a distance of only 10 kilometres from the project site and ignores the impacts on downstream areas like Dhemaji and Lakhimpur, just about 40 kilometres away. and overlooks the assessment of the project’s greenhouse gas emissions. It only covers the sources of air pollution falling in the region, such as mining, vehicular traffic, and domestic fuel burning. More interestingly, Ranganadi’s dam construction was carried out without any EIA or assessment of any other kind, which remains a matter of great concern. It is no surprise that the North East Dialogue Forum wants the project to be decommissioned. Since the environmental consequences of the project remain unknown, it indicates a gross violation of project development rules and procedures.

Inconsistency or unavailability of hydrological data in the Northeast poses a huge challenge for effective flood management in the region. The data-scarce transboundary Brahmaputra River basin lacks sufficient data on river sediment load for instance. It is important to address such knowledge gaps to help overcome errors in decision-making about flood management. Upstream sediment deposition can further aggravate the flooding situation upstream of the construction through the backwater effects, as has often been argued in the case of the Farakka barrage in West Bengal resulting in floods in Bihar during high flows. Unfortunately, no such assessments have been conducted for the Northeast. There is a need for sufficient, updated information and holistic evaluation of the impacts of such structural interventions that fail to be captured by the reductionist views of structural engineering and neoclassical economics.