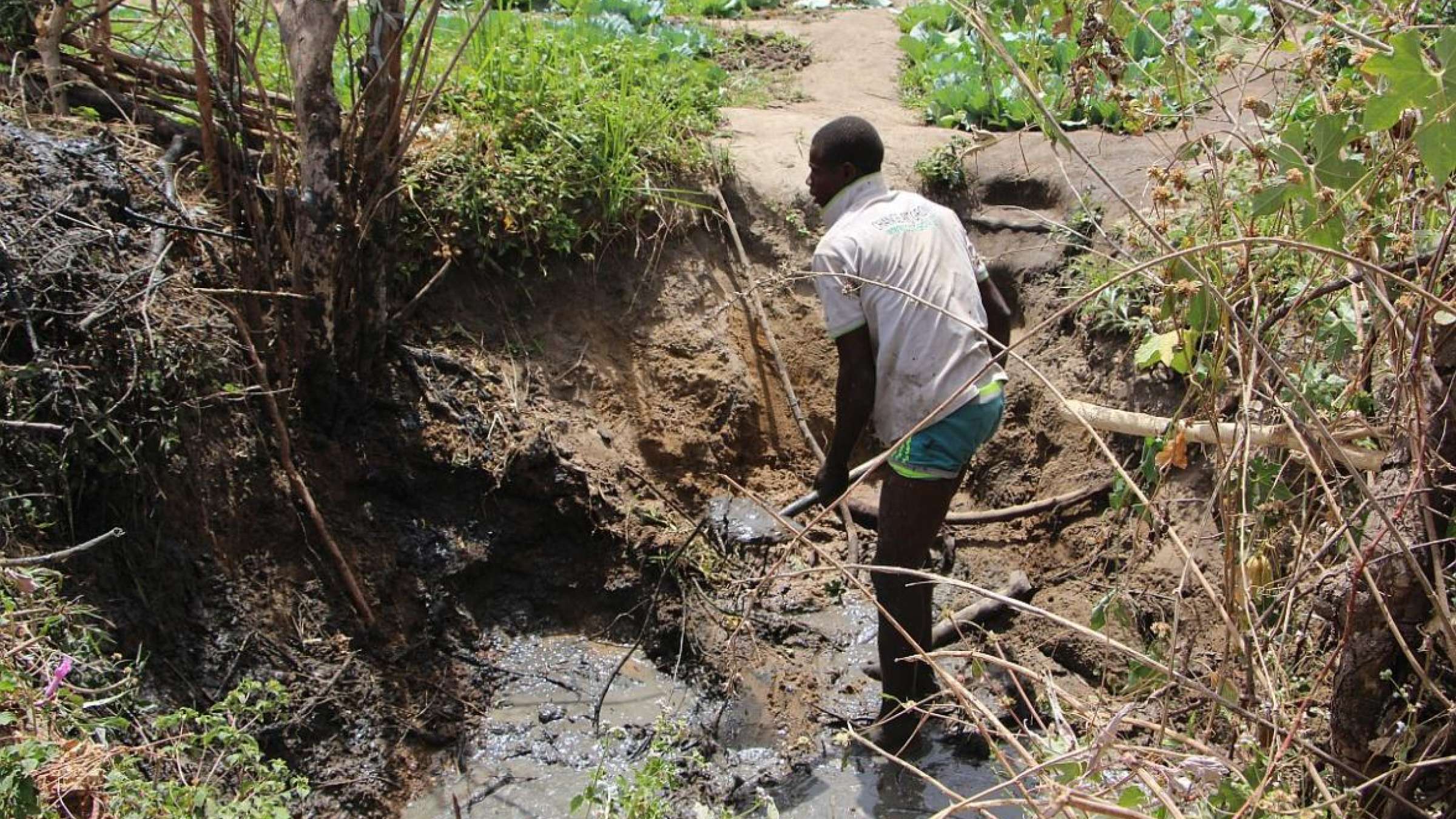 Water scarcity and limited agricultural opportunities are encouraging youth to migrate out of rural areas in search of better employment elsewhere. However, improved water access could help young farmers adapt to climate variability.

In the Loggu community in the Upper West Region of Ghana, water stress due to changing rainfall patterns and poor management of water resources are among the factors causing young farmers to leave their homes and migrate to cities to seek new sources of income. Improved water access could extend farming into the dry season, providing incentives for young people to remain in the community and revitalize the rural economy.

The Resilience Against Climate Change – Social Transformation Research and Policy Advocacy (REACH-STR) project, funded by the European Union and led by the International Water Management Institute (IWMI), among other issues, is investigating the links between climate change and migration in Ghana. The project strives to ensure equality for young people and women in rural communities in the northern region of the country.

Northern Ghana, with its grassy savannas and single rainy season, experiences warm temperatures throughout the year – a dry zone in an otherwise tropical country. Situated just below the Sahara Desert and Sahel, a short rainy season lasts from May to the end of October, bringing the promise of crop cultivation and harvest.

However, lately, rainfall has been unpredictable, starting in June and July, months later than usual. In addition, when rainfall occurs, it varies in intensity, leading to water scarcity and dams constructed for irrigation drying up. During periods with no rainfall, the community relies on boreholes, wells, streams and a small dugout to sustain dry season farming, but these water supplies are limited and run out early in the season.

For most young people in the community, farming is no longer a viable livelihood. Other sources of income are also affected, e.g., using water to make pottery or prepare dawadawa, a local spice commonly used in soups and stews, is no longer possible.

“My friends encourage me to migrate,” said Fatawu Danyarigi, a young man from the community. The Loggu community experiences significant seasonal migration of the youth, mainly male. According to the 2010 Population and Housing Census, 67.2% of all internal migrants in Ghana were leaving from, rather than arriving to, the northern regions.

Danyarigi, 20, grows tomatoes, green pepper, pepper, pumpkin and beans in his garden. Although he would like to also cultivate carrots and cabbage, this is not possible due to a lack of sufficient water. A well in his garden sustains his crops, but in February, Danyarigi expects the well to dry up by early March.

“You can see that the plants are suffering,” he said, noting unripe tomatoes, brown and drying leaves, and plants with stunted growth. When the well dries up, farmers have no choice but to wait for the arrival of rainfall.

Danyarigi’s friends have migrated to the city, journeying around 7 hours by bus from Loggu to Kumasi in southern Ghana, to work as farm laborers or construction workers.

Young people travel to mining towns or big cities such as Accra and Kumasi to do menial jobs, or join farming communities in southern Ghana to work as farm laborers on plantations. While such migration is not a new phenomenon, unlike before, young people are no longer returning home to engage in farming during the rainy season, lowering the productivity of the rural economy.

“They go back and want to farm but experience crop failure,” said Joseph Teye, Associate Professor and Director, Centre for Migration Studies, University of Ghana. “Most of the farmers that used to practice seasonal migration are now engaging in permanent migration due to uncertainties in the agriculture sector as a result of climate variability.”

While there are some positive benefits of out-migration, such as the ability to send money earned in cities back home to the villages, the declining rural population, according to Teye, could lead to a shortage of farm labor and decreased agricultural productivity.

For Danyarigi’s friends, their economic status has not improved much since moving to the city. Yet, at home, they have few alternative livelihood options. Young people can engage in masonry or carpentry, and those who are economically better off can rear animals. Limited prospects sometimes push youth to cut down trees and burn charcoal for sale, harming the natural environment.

A possible solution is dry season farming, where irrigation is practiced using water from dams, dugouts, boreholes and wells rather than depending on rainfall to grow crops.

“Access to water would significantly reduce migration,” said Danyarigi. Improved water access and irrigation would open up opportunities for dry season farming for youth, making it a profitable livelihood option throughout the year.

According to community members, dry season farming is a lucrative business. Farmers can grow vegetables on a small piece of land and sell the crops to bring in considerable profit – more than they would make during the rainy season. A successful harvest during the dry season improves food security and economic status, and provides year-round employment, potentially curbing out-migration.

Currently, irrigation is limited in northern Ghana. Government policies to construct dams or remove silt at the bottom of existing dugouts can improve water access, helping to build the resilience of youth to adapt to climate variability.

Through the REACH-STR project, IWMI and its implementing partners will bring together development planners and decision-makers in the community – farmers, local leaders, government officials, environmental agencies – to predict how various solutions, such as a new dam, could affect the region. This process, referred to as participatory scenario modeling, will encourage young farmers and migrants to share their experiences with policy-makers to find ways to improve water access in northern Ghana.

This will enhance the government’s ability to support policies and interventions that promote climate change resilience, and sustainable and inclusive rural economic growth. Actively influencing government policies could help young farmers such as Danyarigi to improve crop cultivation.

While his friends are pushing him to join them in the city, for now, Danyarigi would like to continue farming. “When crop yields are high” he said, “I will have the money to buy the things I need.”

IWMI is working collaboratively with implementation partners on the REACH-STR project. These partners are the University of Ghana – Centre for Migration Studies, University for Development Studies (UDS) and Council for Scientific and Industrial Research (CSIR) – Science and Technology Policy Research Institute.