UPLOAD YOUR CONTENT
Updates
Source(s)
Center for Climate and Security, the 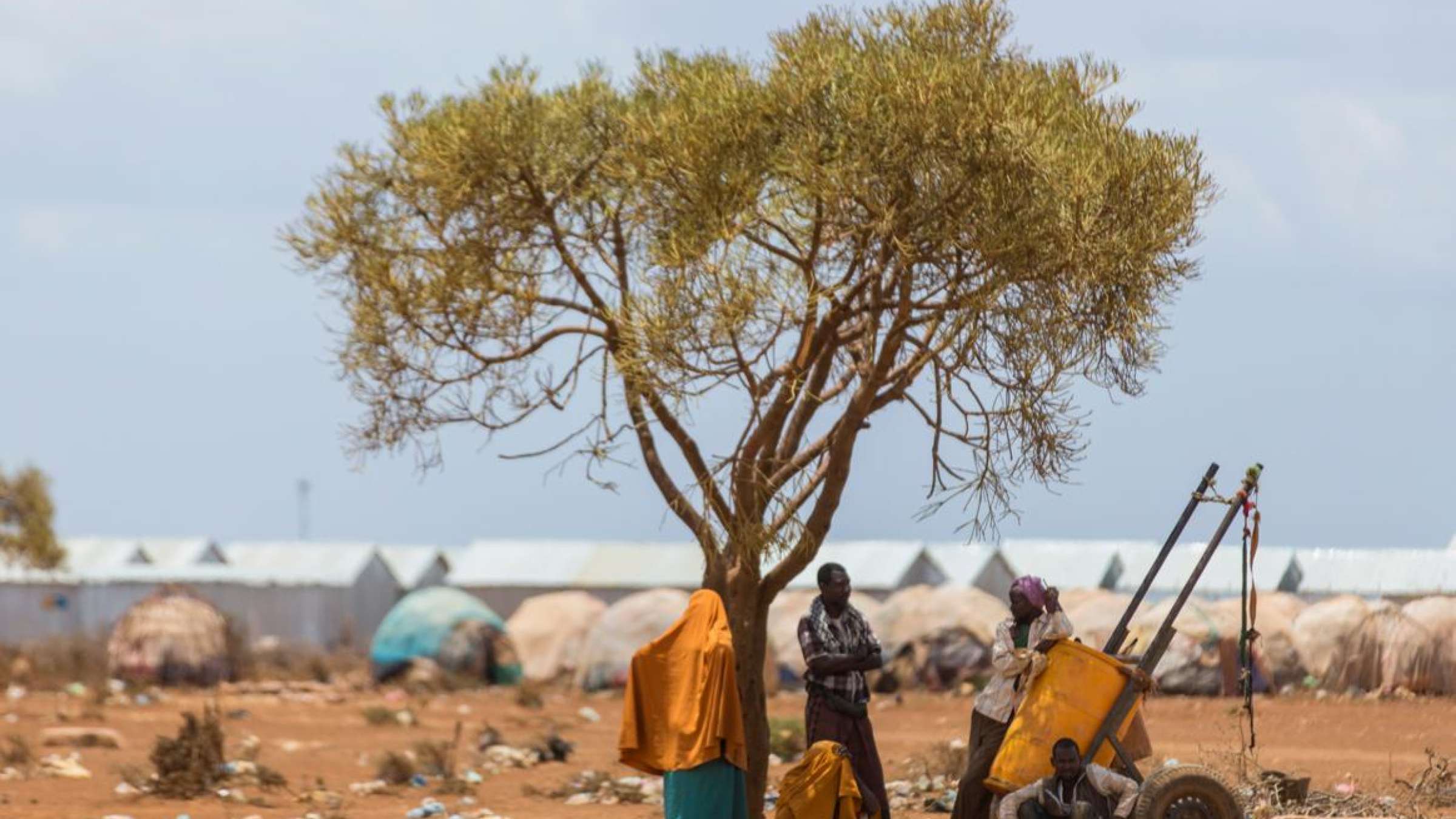 People who carry water rest under a tree in a refugee camp, Baidoa, Somalia. Amors photos/Shutterstock

Today the Expert Group of the International Military Council on Climate and Security (IMCCS) released its second annual World Climate and Security Report, which warns of the compound security threats posed by the convergence of climate change with other global risks, such as COVID-19. The report reveals that the increasing pace and intensity of climate hazards will strain military and security services around the world as they are called on to respond to climate-driven crises, while also facing direct climate threats to their own infrastructure and readiness. The authors also call on security institutions around the globe to act as “leading voices urging significantly reduced greenhouse gas emissions, given recent warnings about the catastrophic security implications of climate change under plausible climate scenarios.”

The report launch is timed ahead of the G7 and NATO Summit where confronting climate change will be at the top of  the agenda. Leaders at these meetings can look to the WCSR 2021 for guidance on addressing climate security risks. Report authors identify opportunities to further “climate proof” international security, including how to take advantage of renewed US leadership on climate action, and build on the climate security momentum from the EU and NATO. The report includes new and improved tools for tackling climate security — including a new risk methodology for tracking the change in global climate risks and an evaluation of nascent best practices for confronting these risks, within defense, diplomatic, and development entities.

In highlighting the key findings of the report, the Chair of IMCCS, General Tom Middendorp, former Chief of Defence of the Netherlands, stated:

“Climate change already poses significant risks to global security. It is time to act. As this report, as well as the global International Military Council on Climate and Security leadership on the issue shows, more and more military leaders are raising the alarm. They recognize the security community has a responsibility to work hand in hand with sectors across their societies in order to prepare for and prevent these threats, including through climate-proofing international security at all levels.”

The IMCCS Secretary General, the Honorable Sherri Goodman, former U.S. Deputy Undersecretary of Defense and now Senior Strategist at the Center for Climate and Security, stated:

“Major and urgent global emissions reductions are necessary in order to avoid significant, severe or catastrophic global security consequences in the future. We also need to climate-proof all elements of security – including infrastructure, institutions and policies. While a great deal of analysis and planning  has been done on the importance and potential of integrating the climate security nexus into development, diplomacy and defense activities, the actual number of  implemented measures is small. The transition from concepts of climate security to implementation is critical and urgently needed.”

“From the White House, to the UN Security Council, to Brussels, world leaders are raising the alarm about the security risks posed by climate change. But you don’t have to take policymakers’ word for it — from the shores of Central America, to the drylands of East Africa, to the Gulf Coast of the United States, climate hazards are already reshaping the security environment around the globe. The question now is what concrete action can defense and security services take to prepare for and prevent these risks? The World Climate Security Report 2021 helps answer this question, with new tools to evaluate risks and climate security practices.”

Captain Steve Brock, U.S. Navy (Ret), IMCCS Chief of Staff, Senior Advisor at the Council on Strategic Risks, and lead author on the report, highlighted that though military and security professionals are raising the alarm, integrated, whole of society solutions are required:

“The security landscape will be increasingly disrupted as a result of climate change.  It has already begun.  As military and security professionals, it is our duty to warn the public about this threat. Smart, integrated, “whole of society” solutions are urgently needed.  We must work together to achieve  significant emissions reductions to avoid the worst effects of climate change and also invest heavily in the climate resilience of nations that need it in order to avoid instability, conflict and major humanitarian disasters.”

Louise van Schaik of the Planetary Security Initiative and Clingendael Institute, who serves as Senior Member of the Executive Committee of the IMCCS and lead author of the report chapter, “Practices to Reduce Climate Security Risks: A First Reflection,” noted:

“Climate-security awareness is now finally being translated into practices to reduce insecurities. Powerful actors, such as militaries from the EU, need to step up their efforts since they can make meaningful contributions and help to open up space for action implemented by civilian actors.”

Julia Tasse, Senior Member of the Executive Committee of the IMCCS and research fellow at IRIS:

Michel Rademaker, Senior Member of the Executive Committee of the IMCCS:

Francesco Femia,  Co-Founder and Senior Advisor of the IMCCS, stated:

“As this report makes abundantly clear, nearly all segments of society, including militaries all over the world, are concerned about the potentially catastrophic risks of a changing climate. Now is the time to act in a way that’s commensurate with those risks. That means major, unprecedented, globally-coordinated action to both rapidly reduce the scale and scope of climate change by dramatically reducing emissions, and to rapidly adapt to its effects. The risks are already here, and we can see greater risks on the horizon. We therefore have a Responsibility to Prepare and Prevent.”

“As seen throughout the report, climate change is no longer a ‘future’ risk that will strike decades from now. Warming temperatures and climate impacts are already actively shaping the security landscape for all countries, and the WCSR offers new tools for forecasting current and future climate threats. We urgently need security actors worldwide to digest this research, and to plan their strategies and operations accordingly to ensure safe livelihoods for all.”