Colombia: Spread the word on building resilience for vulnerable communities 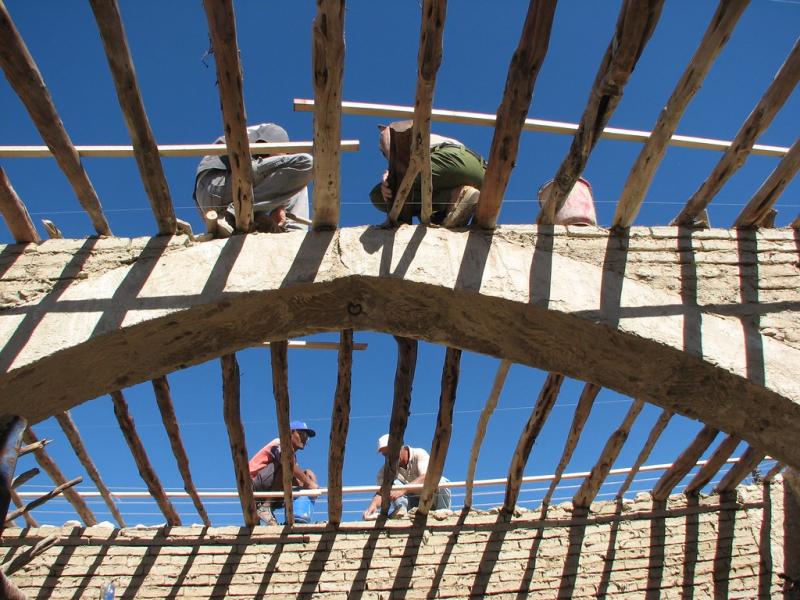 It was off to another prestigious London venue last week for the RMS team, to attend the Insurance Post British Insurance Awards at the Royal Albert Hall. In addition to fulfilling lifelong dreams to see Rick Astley perform live, the RMS team was also competing for the Risk and Resilience Award, alongside four other very worthy contenders. And, first presentation of the night, I was delighted to represent RMS to collect this important award.

This award recognized our longstanding charity partner Build Change, who we have worked together with for six years. Both organizations share a mission: to reduce lives lost from disasters by strengthening the built environment in economically deprived areas.

By combining RMS’ risk modeling expertise and institutional support with Build Change’s technical knowledge and grassroots approach, we’ve been able to demonstrate that retrofitting buildings, from homes to schools, in vulnerable neighborhoods across the globe can significantly reduce economic loss and save lives. And one of our many collaborations was an initiative to greatly improve the safety of seismically-vulnerable communities in Colombia.

Over the past 20 years, more than 10 million people have moved to major cities in Colombia such as Bogotá and Medellin. A lack of affordable housing has led many of these low-income families to settle on the outskirts, often building haphazardly with poor quality construction material. According to CENAC (Centro de Estudios de la Construcción y el Desarrollo Urbano y Regional), three out of every five new homes built in Colombia today are of “informal origin”, meaning they are built without any legal procedures or formal design process.

City governments are aware of the issue but often lack the means to effectively deal with the increasing vulnerability of their existing housing stock; and these low-income families remain significantly at risk of death, injury and economic loss due to house damage or collapse in a future earthquake.

Since late 2013, RMS has been working closely with Build Change, sharing research and expertise and providing early sponsorship of their preventive program activities in Latin America – before a seismic event occurs. This work is focused on promoting the benefits of retrofitting homes for low-income families living in informal neighborhoods in Bogotá, and ranges from working with stakeholders to affect long-term policy changes, developing local skill bases, and stimulating insurance and financing options for low-income households.

This approach of using catastrophe models to understand the benefits of potential resilience investments is an increasingly important tool to establish the ‘Resilience Dividend’ for a given investment: Understanding the future risk reduction benefits of various options, in order to get the best ‘bang for your buck’ when deciding how to invest for best resilience outcomes.

“This approach of using catastrophe models to understand the benefits of potential resilience investments is an increasingly important tool to establish the ‘Resilience Dividend’ for a given investment: Understanding the future risk reduction benefits of various options, in order to get the best “bang for your buck” when deciding how to invest for best resilience outcomes.”

This particular example in Colombia involved the use of RMS earthquake risk modeling, to not only help quantify the potential risks, but to also evaluate how risk levels might change if mitigating factors are put in place. The direct effects of the retrofitting conducted by Build Change were modeled by RMS in terms of costs, cost savings, reduction of losses and reduction of injury and deaths. The study was based on Build Change retrofit methodologies and existing government subsidy systems.

RMS was able to assess the potential impact and cost effectiveness of a scaled retrofit program which has provided vital insight and has contributed to a wider acceptance of retrofitting in Colombia – and an increased institutional urgency to deal with the problem. We showed that over 120,000 deaths and US$2.8 billion of loss could be avoided in a 1 in 200-year event by retrofitting homes in four neighborhoods studied over a ten-year period.

RMS and Build Change also demonstrated that retrofits can be completed with a minimal amount of engineering training, using existing local skills, and for less than half the price of demolishing and rebuilding. One-story retrofits following Build Change’s methodology in Bogotá were completed with an average materials and labor cost of approximately 17 million Colombian Pesos (US$5,825). The materials and labor cost of building a new house of the same size is estimated to be over 54 million Colombian Pesos (US$18,517).

Colombia also has a significant bureaucracy that can hamper efforts to improve existing housing stock. For example, city officials in some neighborhoods require over six months to approve of a single house retrofit. This work, consisting of risk modeling advocacy and support for pilot retrofits, has greatly contributed to the Government of Colombia’s recent decision to make the retrofitting of 600,000 homes an immediate national priority.

Only through working together has this been achieved. Dr. Elizabeth Hausler, Build Change CEO and Founder, said in our award application, “As a collaborator, RMS truly understands the big picture, knows lives are at stake, and has repeatedly shown a commitment to creating systems change at scale. The mutual enthusiasm shared between RMS and Build Change has resulted in interaction from the board level down, that is not only positively impacting the bottom-line but saving lives.” And likewise, without Build Change’s on-the-ground expertise, and their practical application of technical and scientific approaches, implementation would not have scaled so dramatically.

On behalf of RMS and Build Change, I would like to thank the award judges for selecting our entry, and I invite you to find out more about our joint work and also support Build Change to expand the scope of their operations, to help more vulnerable communities gain strength.

Planning for resilience: Innovative land use policies for building a resilient city

How Colombia is preparing for its next earthquake