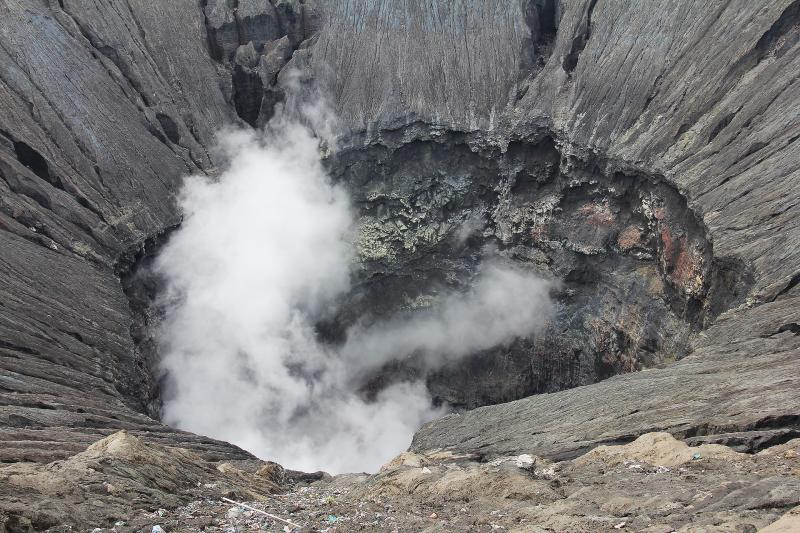 We live in an age of compounding uncertainty. The unpredictable impacts of climate change and the rapid urbanization of societies is increasing the complexity, difficulty, and necessity of making sound decisions when faced with numerous options. This uncertainty is acute with respect to natural disasters – for example, predicting hurricane intensity or locating the next big earthquake remain challenging tasks despite advances in science and monitoring tools.

The challenge of anticipating and communicating the risk of volcanic eruptions to communities requires complex decision-making. Ecuador’s Cotopaxi Volcano and Indonesia’s Mount Agung are recent examples where the warning signs were present (small earthquakes, increasing gas emissions, and more), yet an eruption came much later than expected. Volcanic eruptions are therefore a double-edged sword that often creates a decision-making dilemma. While signs of volcanic activity can provide adequate time for preparation and evacuation, the very same signs can also create conditions of extreme uncertainty, which can be exacerbated by piecemeal communication around eruption events.

So, what have we learned from recent experiences on the challenges of communicating volcanic risk?

1. While largely unpredictable, volcanic eruptions are devastating and can change the course of humanity.

Over the last 11,500 years, more than 1,500 major eruptions have occurred, with approximately 500 in the Pacific "Ring of Fire" alone. We don’t have to look far back in history to find examples of devastating volcanic eruptions. The instantaneous destruction of Pompeii by Mt. Vesuvius is perhaps the most oft-cited event, but a more devastating, less remembered event is the 1815 Mount Tambora eruption in Indonesia. The "Pompeii of the East" claimed the lives of more than 70,000 people. Mt. Tambora’s ash fallout led to climate anomalies throughout Europe and North America for years afterward, causing the century’s worst famine. Dozens more recent eruptions have claimed tens of thousands of lives and caused billions of dollars in economic losses, including: El Chichon (Mexico); Nevada del Ruiz (Colombia); Mt. Pinatubo (Philippines); Mt. Etna (Italy); and Iceland’s Eyjafjallajökull.

2. Communicating risk for volcanic eruptions on a timely basis is not straightforward.

Though the science of volcanic eruption forecasting has come a long way in recent decades, accurately predicting volcanic eruptions and communicating uncertainty to highly exposed communities is fraught with difficulties and can quickly become ineffective. For example, communities may risk not evacuating, or wait for clear communication that a volcano is likely to erupt when it’s already too late to evacuate. While volcanology offers a wide range of measurements that can indicate if and when an eruption will occur, timely decisions still need to be taken by experts regarding when to publicly sound the alarm.

Now that increasingly dense human populations span the globe, today’s level of exposure to volcanic risk is unprecedented. More than one billion people live within 150 kilometers of an active volcano, with major cities like Tokyo, Naples, Manila, or Managua ranking among the most vulnerable to their impacts – eruptions which could cost large cities up to $30 billion. Unaware of the danger or overwhelmed by the looming decision, governments tend to become paralyzed into the least helpful course of action – doing nothing.

Given that large-scale evacuations require tremendous resources and have ripple effects on economic activity, should governments err on the side of caution, or preparedness?

Deciding how to deal with risk is an inherently political process, and our decisions have serious and lasting consequences, including for potential volcano eruptions. But informational complexity and compounding uncertainty should not dissuade us from taking action to ensure the safety and prosperity of communities. The way forward, among many possible courses of action, will not simply be discovered – it must be created.

To delve into these questions and others, the University of Plymouth, GFDRR, and the World Bank are hosting a dedicated session at the 2018 Understanding Risk Forum in Mexico City on May 17, 2018. As we focus on the specter of volcanos, we will also consider how our discussion and conclusions might be of value to those faced with climate change uncertainty, rapid urbanization, and other concerns closely related to volcano risk.

Are we prepared for the next mega eruption?

The costs of waiting for a volcano to erupt