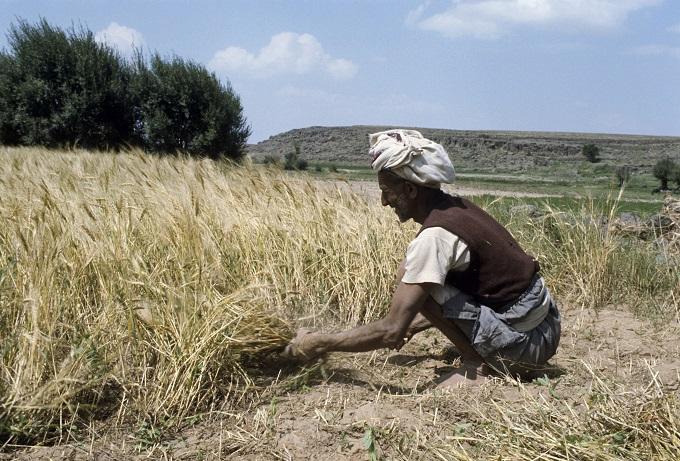 PEMBA, Zambia - As governments gather in Bonn, Germany for the next two weeks to hammer out a blueprint for implementation of the global climate change treaty signed in Paris in 2015, a major focus will be on emissions reductions to keep the global average temperature increase to well below 2°C by 2020.

While achieving this goal requires serious mitigation ambitions, developing country parties such as Zambia have also been emphasising adaptation as enshrined in Article 2 (b) of the Paris Agreement: Increasing the ability to adapt to the adverse impacts of climate change and foster climate resilience and low greenhouse gas emissions development, in a manner that does not threaten food production.

“My skepticism turned into real optimism when the two hectares I cultivated under conservation farming redeemed me from a near disaster when the five hectares under conventional farming completely failed." --farmer Damiano Malambo

The emphasis by developing country parties on this aspect stems from the fact that negative effects of climate change are already taking a toll on people’s livelihoods. Prolonged droughts and flash floods have become common place, affecting Agricultural production and productivity among other ecosystem based livelihoods, putting millions of people’s source of food and nutrition in jeopardy.

It is worth noting that Zambia’s NDC focuses on adaptation. According to Winnie Musonda of the United Nations Development Programme (UNDP), “There are three mitigation components—renewable energy development, conservation farming and forest management, while adaptation, which has a huge chunk of the support programme, has sixteen components all of which require implementation.”

This therefore calls for the tireless efforts of all stakeholders, especially mobilisation and leveraging of resources, and community participation anchored on the community-based natural resource management (CBNRM) approach.

Considering the country’s ambitious emission cuts, conservation agriculture offers a good starting point for climate resilience in agriculture because it has legs in both mitigation and adaptation, as agriculture is seen as both a contributor as well as a solution to carbon emissions.

According to the Food and Agriculture Organisation of the United Nations (FAO), Conservation Agriculture (CA) is an approach to managing agro-ecosystems for improved and sustained productivity, increased profits and food security, while preserving and enhancing the resource base and the environment. Minimum tillage, increased organic crop cover and crop rotation are some of the key principles of Conservation Agriculture.

As a key stakeholder in agriculture development, FAO is doing its part by supporting the Ministry of Agriculture in the implementation of the Conservation Agriculture Scaling Up (CASU) project. Targeting to benefit a total of 21,000 lead farmers and an additional 315,000 follower farmers, the project’s overall goal is to contribute to reduced hunger, improved food security, nutrition and income while promoting sustainable use of natural resources in Zambia.

So what is emerging after implementation of the 11 million Euro project? “The acid test was real in 2015 when the rainfall pattern was very bad,” says Damiano Malambo, a CA farmer of Pemba district in Southern Zambia. “My skepticism turned into real optimism when the two hectares I cultivated under conservation farming redeemed me from a near disaster when the five hectares under conventional farming completely failed.”

The bad season that farmer Malambo refers to was characterized by El Nino, which affected agricultural production for most African countries, especially in the Southern African region, leaving millions of people without food. But as the case was with farmer Malambo, CA farmers thrived amidst these tough conditions as the CASU project discovered in its snap assessment.

“CA has proved to be more profitable than conventional agriculture”, says Precious Nkandu Chitembwe, FAO Country Communications Officer. “In seasons when other farmers have struggled, we have seen our CA farmers emerging with excellent results”, she adds, pointing out that the promotion of legumes and a ready market has improved household nutrition and income security for the farmers involved in CA.

And farmer Malambo is a living testimony. “In the last two seasons, I have doubled my cattle herd from 30 to 60, I have bought two vehicles and my overall annual production has increased from about 150 to 350 by 50kg bags.

“I am particularly happy with the introduction of easy to grow cash crops such as cowpeas and soybeans which are not only money spinners but also nutritious for my family—see how healthy this boy is from soya-porridge,” says Malambo pointing at his eight-year-old grandchild.

While Zambia boasts a stable food security position since the introduction of government farmer input subsidies in early 2000s, the country’s record on nutrition leaves much to be desired. Hence, the recent ranking of the country in the top ten hungriest countries in the world on the Global Hunger Index (GHI) may not come as a surprise, as the most recent Zambia Demographic and Health survey shows that 40 per cent of children are stunted.

The GHI, now in its 12th year, ranks countries based on four key indicators—undernourishment, child mortality, child wasting and child stunting. According to the International Food Policy Research Institute, of the countries for which scores could be calculated, the top 10 countries with the highest level of hunger are Central African Republic, Chad, Sierra Leone, Madagascar, Zambia, Yemen, Sudan, Liberia, Niger and Timor-Leste.

“The results of this year’s Global Hunger Index show that we cannot waiver in our resolve to reach the UN Sustainable Development Goal of zero hunger by 2030,” says Shenggen Fan, director general of IFPRI, adding that progress made since 2000 is threatened, emphasising the need to establish resilience for communities at risk of disruption to their food systems from weather shocks or conflict.

It is worth noting that Zambia has recognized the challenges of nutrition and has put in place several multi-sectoral measures such as the First 1000 Most Critical Days campaign—an integrated approach to address stunting by tackling both direct and indirect causes of under-nutrition. Unlike the standalone strategies of the past, the 1000 Most Critical Days campaign brings together all key Ministries and stakeholders of which the Ministry of Agriculture is a key stakeholder and entry point.

And the implementation of CA, of which crop diversification is a key principle, is one of the Ministry’s contributions to the overall objective of fighting under-nutrition. As alluded to by farmer Malambo, promotion of crops such as soy beans and cowpeas among other food legumes is critical to achieving household nutrition security.

“With a known high demand for good nutrition in the country, especially for rural populations, soybean and other food legumes offer an opportunity to meet this demand—from soybean comes soy milk which is as competitive as animal milk in terms of nutrition, use in the confectionary industry and other numerous value addition options at household level for nutritional diversity,” explains Turnbull Chama, Technical Assistant, Climate Change component at the FAO Country Office.

While CA is a proven approach to climate resilience in agricultural production for food and nutrition security, its adoption has not been without hitches. According to a study conducted by the Indaba Agricultural Policy Research Institute (IAPRI), adoption rates for Conservation Agriculture in Zambia are still very low.

The study, which used data from the 2015 national representative rural household survey, found that only 8.8% of smallholder households adopted CA in the 2013/14 season. The report notes, however, that social factors, such as belief in witchcraft and prayer as enhancement of yields, were found to influence decision-making considerably.

But for the Southern Province Principal Agricultural Officer in the Ministry of Agriculture, Paul Nyambe, CA adoption should not be measured in a generic manner.

“The package for conservation agriculture is huge, if you measure all components as a package, adoption is low but if you looked at the issues of tillage or land preparation, you will find that the adoption rates are very high,” he says. “So, that’s why sometimes you hear of stories of poor adoption because there are several factors that determine the adoption of various principles within the package of conservation agriculture.”

Agreeing with these sentiments, Douty Chibamba, a lecturer at the University of Zambia Department of Geography and Environmental studies, offers this advice.

“It would be thus important for future policies and donor projects to allow flexibility in CA packaging because farmers make decisions to adopt or not based on individual components of CA and not CA as a package,” says Chibamba, who is also chairperson of the Advisory and Approvals committee of the Zambia Civil Society Environment Fund phase two, funded by the Finnish Embassy and managed by Panos Institute Southern Africa under its (CBNRM) forum.

This year’s World Food Day was themed around investing in food security and rural development to change the future of migration—which has over the years been proved to be as a result of the former. And FAO Country Representative George Okechi stresses that his organization is committed to supporting Zambia in rural development and food security to reduce rural-urban drift.

“With our expertise and experience, working closely with the Ministry of Agriculture, we continue providing policy support to ensure that farmers get desired services for rural development,” says Okechi.

“We are also keen to help farmers cope with effects of climate change which make people make a move from rural areas to urban cities in search of opportunities,” he added, in apparent reference to Climate Smart Agriculture initiatives that FAO is implementing in Zambia, among which is CASU.