London, 24 August 2022: The record-breaking heatwave experienced across Europe this summer will be considered an “average” summer by 2035, even if countries meet their current climate commitments so far agreed in negotiations under the 2015 Paris Agreement.

That’s according to the latest data from the Met Office Hadley Centre, commissioned by the Climate Crisis Advisory Group (CCAG).

The data (figure 1 below) looks at how rapidly temperatures are changing across Europe and tracks observed mean summer temperatures since 1850 against model predictions. It finds that, according to current predictions[1], an average summer in central Europe by 2100 will be over 4°C hotter than it was in the pre-industrial era. 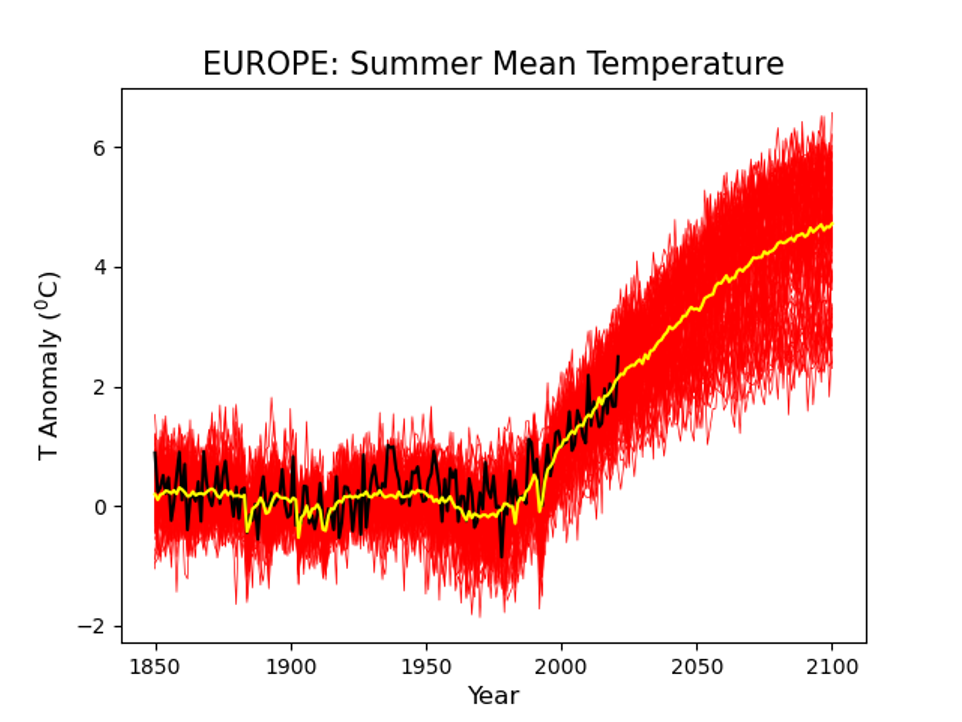 Figure 1: Predicted and observed data on summer mean temperature across Europe by the Met Office Hadley Centre (2022).  The red curves are individual runs of the model, the yellow curve is the average of these, and the black line is the observed summer temperatures in central Europe up to 2021.

The agreement between the observations over the period 1850 and 2021, black curve, and the model, the yellow curve, is very satisfactory.  This gives us all confidence in the accuracy of the model itself, and puts to bed any doubts about the usefulness of these very powerful and detailed models.

This serves as an urgent reminder of the need for countries to go well beyond their nationally determined contributions so far pledged under the Paris Agreement, which aims to limit global warming to under 1.5°C if at all possible.

As such, CCAG argues for mitigative action to be pursued along three axes which the Group has termed the 3Rs.

“the science is clear that extreme weather currently faced across the world is at least in large part a consequence of human-induced climate change. The data released by the Met Office today shows that, even if countries meet their commitments to reduce emissions they have made so far, the situation is still set to get worse, with weather in Europe predicted to become even more extreme than seen this summer. This data doesn’t fully account for the instability of the Arctic, which we now know is a global tipping point which that could have major cascading consequences for the entire planet.
“One thing is abundantly clear, and that is that countries across the world must not only meet their NDCs, but voluntarily look to increase them. The time for ambitious, urgent action is now. It is only through the mitigative measures of Reduce, Remove and Repair, pursued with equal vigour and urgency, that we can hope to move away from the path to disaster we’re currently set on and achieve a manageable future for humanity.”

“In the aftermath of the 2003 European heatwave, which is estimated to have killed over 70,000 people, I predicted that such temperatures, so exceptional at the time, would become the norm under continued emissions. That prediction has now been realised. The risks of extreme weather, including fires, drought and flash floods, will keep increasing rapidly unless emissions of greenhouse gases are reduced substantially.”
Read the original story here
Share this
Related information
Related links
Damage to crops from heatwaves and droughts ‘tripled’ in Europe over past 50 years
The cost of heatwaves in Europe
Current and projected regional economic impacts of heatwaves in Europe
8 facts that prove Europe's record heatwave is the new normal
Keywords
Hazards
Heat Wave
Themes
Risk Identification & Assessment
Country & Region
Europe