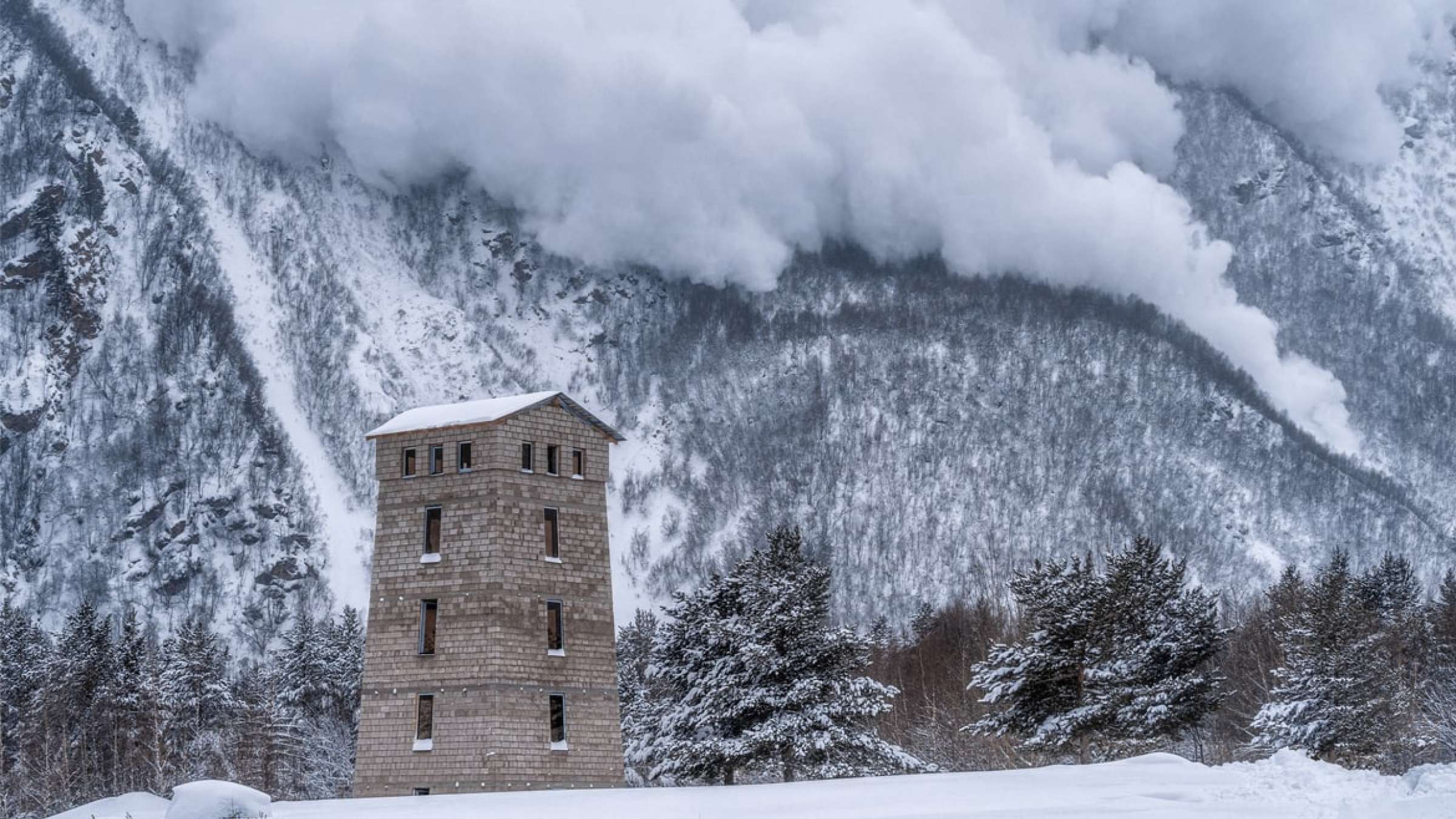 On a recent summer afternoon when temperatures simmered in the 90s, the inside of a lab at Montana State University felt more like midnight in January, with ice crystals hanging in the air and glinting as if in moonlight.

The ceiling of a cold chamber in MSU’s Subzero Research Laboratory was chilled to minus 58 degrees Fahrenheit, simulating a clear night so frigid it sucks warmth and water vapor from snow to form the feathery, glittering ice crystals known as surface hoar.

“This is what will grow on the surface of the snow on really cold winter nights,” said Evan Schehrer, a doctoral student in materials science, gesturing to a snow sample and the crystals riming other surfaces in the lab. “In here it grows perfectly.”

The crystals aren't just pretty — they mark a frontier in improving how scientists monitor water resources and predict potentially fatal avalanches. Seen through a specialized instrument called a hyperspectral imager, the surface hoar appeared as shades of gray corresponding to detailed information about the snow surface.

“This is kind of the extreme of what the snow surface can look like and how it can interact with these instruments,” said Kevin Hammonds, director of the Subzero Lab and assistant professor in the Department of Civil Engineering in MSU’s Norm Asbjornson College of Engineering. "We can fine-tune the lab conditions to create really solid data that's almost impossible to get in the field."

The research, funded by $45,000 from NASA in a follow-up to $250,000 Hammonds received in 2018, comes as the space agency and others seek to develop satellites that can measure the depth and composition of snow across Earth's surface. With much of the arid American West enduring a prolonged and worsening drought, scientists have already used airplanes equipped with lidar — short pulses of laser light — to measure snowpack depth across the Sierra Nevada Mountains, part of a growing effort to quantify how much water is produced when snow melts.

Based on a series of recent Subzero Lab studies, Hammonds thinks the hyperspectral imager — which is calibrated to measure light reflected by snow in the invisible near-infrared spectrum — could play an important role. The technology was developed by local high-tech company Resonon, and one of his graduate students, Chris Donahue, pioneered its use for snow science. Donahue, who earned his doctorate from MSU last spring, used the tool to make the first real-time images of meltwater flowing through snow, publishing the findings in the journal Remote Sensing in May. That study involved close-up measurements different from how the imager would be used on a satellite but that nonetheless demonstrated its capabilities.

“We think there’s a lot of potential for these tools to work synergistically,” Hammonds said. Lidar fills in some of the limitations of the hyperspectral imager, he said, which in turn could provide more detailed information about the snow surface. The current project involves comparing hyperspectral and lidar images of multiple types of snow.

“When we can confidently measure the surface reflectivity of snow across large areas using remote sensing, we’ll be able to predict how much of the sun’s energy the snowpack will absorb, which can tell you how much it will melt," Hammonds explained. "That essentially tells you how much runoff water there will be over a given period."

There are also implications for avalanche forecasting. Surface hoar is a concern because the delicate crystals can form a weak layer when buried in the snowpack, allowing a slab of snow to slide when triggered by a skier or other disturbance. Ice crusts and other crystal structures can also form dangerous weak layers.

"Just by measuring the light reflected off the snow, we're able to tell the size and shape of the grains and how closely they're packed together," said civil engineering doctoral student James Dillon, a partner on the current project whose previous research involved lidar for avalanche forecasting. "We can see it with very high precision."

Hammonds expects the combined work of Donahue, Schehrer and Dillon to result in nine scientific papers, a significant body of work, he said. All of the studies suggest or demonstrate the potential for combining multiple technologies, especially hyperspectral imaging, to push the boundaries of what's possible for both hydrological and avalanche forecasting.

"We think there's going to be a lot of interest in the snow science community in (hyperspectral imaging)," Hammonds said. "If we were to have these capabilities on satellites, forecasting would advance really rapidly.”

While much of the work by other scientists has involved comparing remote lidar data with manual measurements of the same snowpack in the field, where conditions change rapidly, Hammonds said MSU is positioned to make important contributions by testing the technologies in a highly controlled and reproduceable environment. The Subzero Lab is one of only a few in the world that have specialized cold-rooms and tools like the microCT, which uses X-rays to make extremely detailed measurements of individual snow grains that the scientists can use to make sense of the lidar and hyperspectral images. The research could play a key role in helping NASA and others design the instruments that ultimately orbit Earth, he said.

“It’s a really unique facility we have here," Hammonds said. “We’re excited to see this research be applied. That’s what motivates us — when our work has a real benefit out in the world.”