Measuring devices are once again being temporarily installed on the slopes of Dürrboden in Davos for the winter. These devices are used to automatically detect avalanches and will help improve future avalanche bulletins.

As well as the current snow and weather situation, avalanche danger is assessed using information about avalanche activity. Such data are particularly relevant, but the avalanche warning service is only aware of a fraction of all avalanches that have occurred. Researchers from the SLF want to bridge this data gap using measuring systems able to automatically detect avalanches. Due to the high costs involved, such equipment is not currently widely used, so researchers intend to work with partner companies to develop a cost-effective and reliable monitoring system that can be deployed in numerous locations. This will complement the existing system of human observations, which deliver valuable information. After all, knowing when and where avalanches occur is vital.

A test system has been installed on Dürrboden in the Dischma Valley every autumn for several years now, before being dismantled after the snow melts in spring. This system comprises five infrasound sensors and five seismometers buried underground, with the only visible parts being a pole with a solar panel attached, which serves as a power supply, and cameras that continuously photograph the surrounding mountainsides. When an avalanche is triggered, it generates vibrations in the subsoil. These are measured by the seismometers, which are the same sensors used to register and locate earthquakes. Avalanches also emit low-frequency acoustic signals (known as infrasound) that are recorded by special microphones. However, the sensors also record many other signals that have nothing to do with avalanches. With the help of algorithms, the avalanche signals are filtered out as quickly and automatically as possible so that data about an avalanche are available in real time. Depending on their size, avalanches can be detected from several kilometres away; they do not even have to overflow the sensors. It is also possible to pinpoint the location of the avalanches based on the arrangement of the sensors.

The images captured by the cameras allow the researchers to check whether the systems have really recorded an avalanche or not. When installing the sensors, it is important to eliminate potential interference as much as possible. It is therefore advisable to keep a certain distance from streams or roads, for example. Dürrboden in the Dischma Valley makes an ideal test site because conditions there are perfect: it has minimal interference due to a lack of traffic and people, is easily accessible and experiences many avalanches. More work is still needed before the new monitoring system can be put into operation. The system and algorithm are currently being honed to increase their reliability. This means that assessments will combine data from seismic and infrasound measurements for the first time. Researchers are also using drones to measure snow depth and record avalanches. The monitoring system is expected to be ready for the market in about three years' time.

If this additional information on current avalanches is available in the future, the SLF avalanche warning service will be able to better assess the danger. This would not only be helpful for winter sports enthusiasts, but would also benefit the wider public in mountain regions as municipalities' avalanche services would have better data on which to base decisions, for example regarding road closures and subsequent reopening. 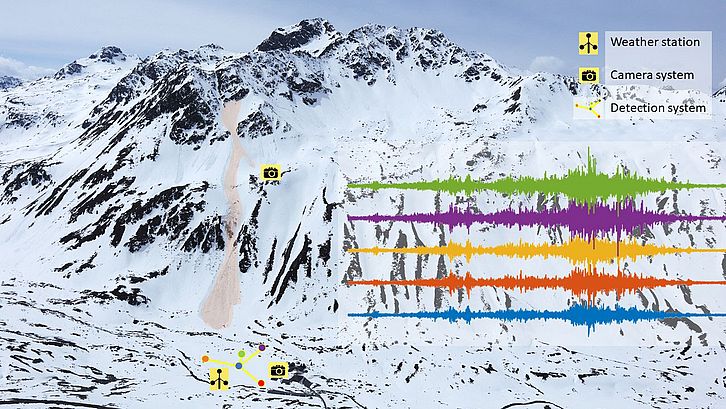