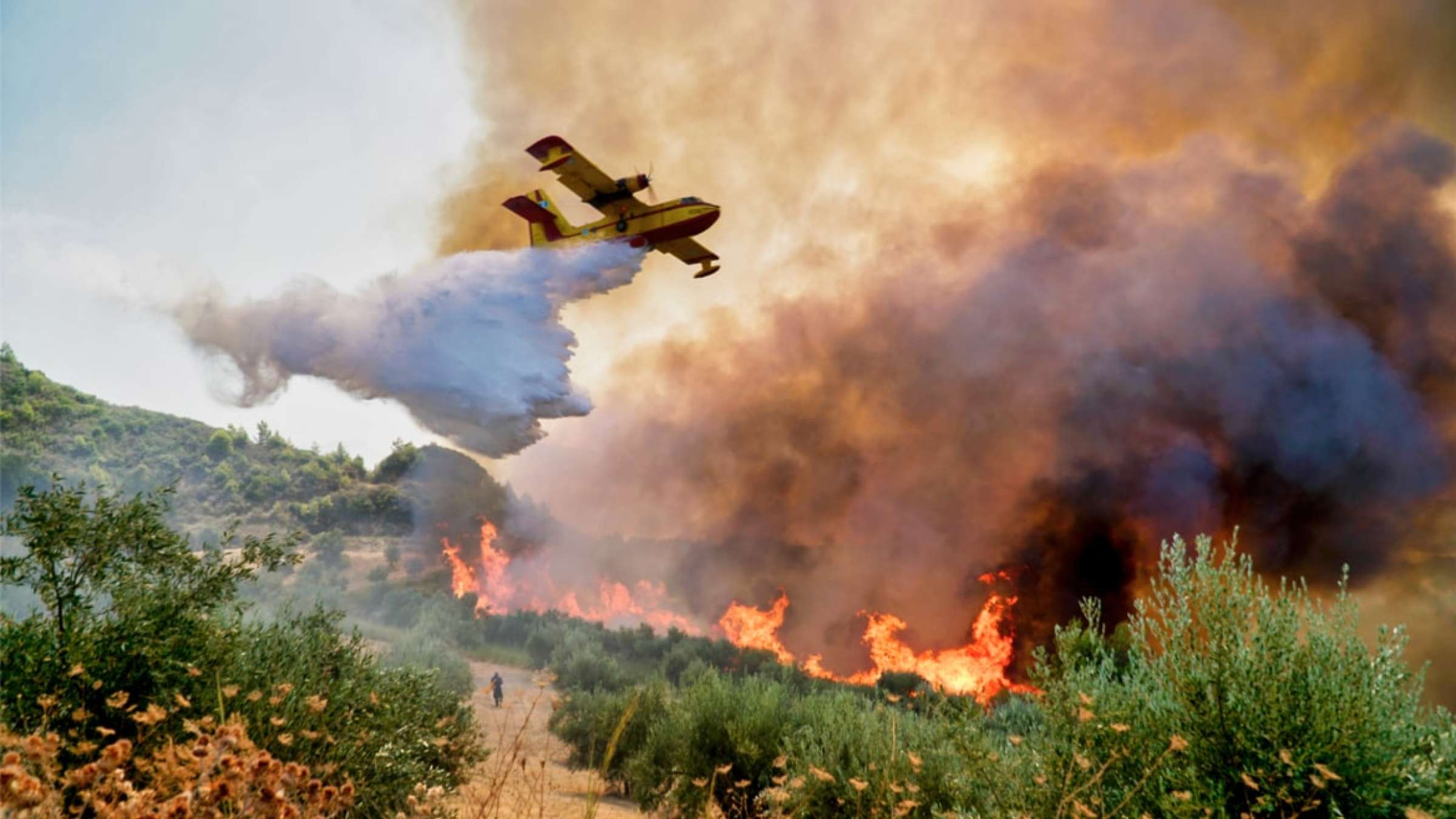 A firefighting plane releases its load of water as it tries to extinguish a fire in Xelidoni village in the area of Ancient Olympia, Greece (2021)
Ververidis Vasilis/Shutterstock

Disaster experts call for a pivot to prevention techniques to staunch wildfires scorching in Greece, Italy and Algeria, but former Greek finance minister Yanis Varoufakis said a unit which used them was scrapped in austerity measures

BRUSSELS - As wildfires incinerate swathes of the Mediterranean, United Nations officials and disaster experts have called for an urgent revamp of firefighting to cope with a new era of mega-blazes.

Nearly 80 people have died in fires that have swept through Algeria, Greece, Italy and Turkey, driving thousands from their homes and underscoring projections in this week's IPCC report of spiralling "fire weather conditions" by mid-century.

In the new climatic era, mega-fires may erupt within minutes of ignition, said Sebastien Penzini, deputy Europe chief of the U.N. Office for Disaster Risk Reduction.

"The evolving nature of wildfires obliges us to really change our paradigm and put more emphasis on fire prevention than suppression," he said.

"Because the fires to come - and those we're already observing in Europe - are completely beyond (our) control."

In a week when Italy hit 48.8 Celsius (119.8°F) - which could be a European record - experts like Penzini urged nations to adopt a raft of reforms, including mandatory fire breaks, new regulations and improved rural development. "Prevention is not a cost," Penzini said. "It's an investment which deserves and requires more budgets and funding."

He called for tough new laws to regulate outdoor fires and oblige homeowners in fire-prone areas to maintain "defensible areas" - buffer spaces between houses and nearby grass, trees and shrubs.

The rise in extreme weather events is also raising bigger policy questions about the safest places to live in Europe - with risks posed by having both too many and too few people in areas that are vulnerable to scorching summer heat.

Turkey's southern Mediterranean coast was hit last month by its biggest fires to date. Three people died and hotels in the popular beach resorts of Marmaris and Didim had to be evacuated due to separate blazes.

"As a strategic question, should those resorts even be there?" asked Peter Moore, a fire management specialist with the U.N. Food and Agriculture Organization, adding that reducing fuel loads in these areas should be the priority.

Conversely, shrinking rural populations - with some 4 million small farms abandoned between 2005 and 2016, according to European Union - mean tracts of land are becoming overgrown and dry, and at greater risk of catching fire.

Penzini said that "funds for encouraging and promoting rural development and agriculture" were needed to decrease the "fuel loads" of burnable plant material in the countryside.

As fire seasons lengthen, forestry experts also called for a greater focus on traditional Mediterranean fire prevention techniques that use small fires to clear forest floors of dead leaves and branches which can fuel mega-blazes.

Controlled fires can create what Marc Castellnou, a wildfires analyst for the fire service in Spain's Catalan region, called "a mosaic of fire breaks" that prevent flames leaping across natural boundaries toward homes.

However, such policies may face economic tailwinds.

Yanis Varoufakis, who led Greece's bailout negotiations to resolve its debt crisis in 2015, said the country's bushfire fighting unit, which operated on these principles, was dismantled in a cost-cutting move demanded by creditors.

The former finance minister named two European Commission officials who he said threatened to shut down the Greek banking system in March 2015 if his government reinstated the Forestry Commission bushfire unit.

"They kept saying, 'no backtracking, if you hire one more fire brigade man or woman, we will consider this casus belli," Varoufakis, who resigned after a referendum rejected bailout terms proposed in Brussels, told the Thomson Reuters Foundation.

Asked what the officials meant by casus belli - Latin for justification for war - Varoufakis said, "closure of the banks".

A Commission spokesperson rejected the allegations.

"The institutions involved in the financial assistance programme have never suggested to close any firefighting units, nor issued threats regarding the banking system of any member state," they said.

Greeks have expressed anger in recent weeks about the pressure on firefighters battling devastating wildfires, with photos on social media showing exhausted firefighters asleep on the ground, still dressed in their smoke-stained uniforms.

The head of Greece's firefighters federation, Dimitris Stathopoulos, said 5,000 staff needed to be hired immediately, after a decade of austerity that cut into public services.

In the meantime, Varoufakis said firefighters were relying on prayers.

"I was talking to one of the chiefs of the fire brigade only two months ago and he confessed to me, 'I cant sleep at night because if we have major fires, we are really not equipped to deal with them. So pray for a cool summer,'" he said.