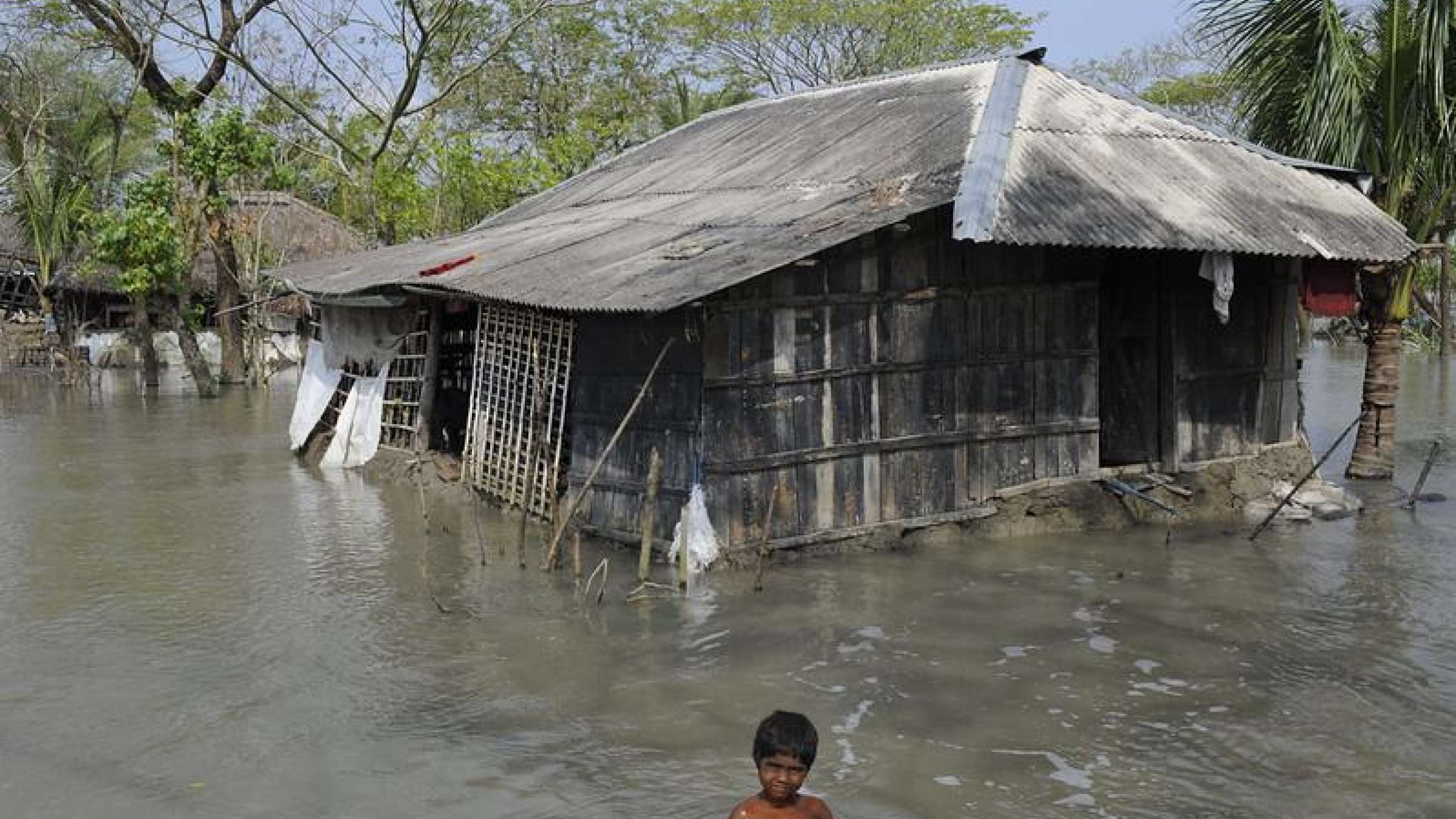 Climate change is already damaging the health of the world's children and is set to shape the wellbeing of an entire generation unless the world meets Paris Agreement targets to limit warming to well below 2 degrees C, according to a major new report published in The Lancet.The Lancet Countdown on Health and Climate Change is a comprehensive yearly analysis tracking progress across 41 key indicators, demonstrating what action to meet Paris Agreement targets--or business as usual--means for human health. The project is a collaboration between 120 experts from 35 institutions including the World Health Organisation (WHO), World Bank, University College London, and Tsinghua University.

"This year, the accelerating impacts of climate change have become clearer than ever", says Professor Hugh Montgomery, Co-Chair of The Lancet Countdown and Director of the Institute for Human Health and Performance at University College London. "The highest recorded temperatures in Western Europe and wildfires in Siberia, Queensland, and California triggered asthma, respiratory infections and heat stroke. Sea levels are now rising at an ever concerning rate. Our children recognize this Climate Emergency and demand action to protect them. We must listen, and respond." [3]

For the world to meet its UN climate goals and protect the health of the next generation, the energy landscape will have to change drastically, and soon, the report warns. Nothing short of a 7.4% year-on-year cut in fossil CO2 emissions from 2019 to 2050 will limit global warming to the more ambitious goal of 1.5°C.

If the world follows a business-as-usual pathway, with high carbon emissions and climate change continuing at the current rate, a child born today will face a world on average over 4?C warmer by their 71st birthday, threatening their health at every stage of their lives.

"Children are particularly vulnerable to the health risks of a changing climate. Their bodies and immune systems are still developing, leaving them more susceptible to disease and environmental pollutants", says Dr Nick Watts, Executive Director of The Lancet Countdown. "The damage done in early childhood is persistent and pervasive, with health consequences lasting for a lifetime. Without immediate action from all countries to cut greenhouse gas emissions, gains in wellbeing and life expectancy will be compromised, and climate change will come to define the health of an entire generation." [3]

Infants will be among the worst affected by crop failures

As temperatures rise, harvests will shrink--threatening food security and driving up food prices. When grain prices spiked in 2007-2008, for example, Egypt's bread prices rose 37%. Over the past 30 years, global yield potential of maize (-4%), winter wheat (-6%), soybean (-3%), and rice (-4%) has fallen. Infants and small children are among the worst affected by malnutrition and related health problems such as stunted growth, weak immune systems, and long-term developmental problems.

Children will be particularly susceptible to infectious disease outbreaks

Children will be particularly susceptible to infectious diseases that rising temperatures and changing rainfall patterns will leave in their wake. Over the past 30 years, the number of climatically suitable days for Vibrio bacteria (that cause much of diarrhoeal disease globally) have doubled. The threat is particularly high in the Baltic (with a record high of 107 suitable days in 2018) and in Northeast USA where the sea has been warming rapidly.

Similarly, changing weather patterns are creating favourable environments for Vibrio cholerae bacteria, with global suitability rising almost 10% since the early 1980s--increasing the likelihood of cholera outbreaks in countries where the disease does not regularly occur.

Spurred on by climate change, dengue is the most rapidly spreading mosquito-borne viral disease in the world. Nine of the 10 most hospitable years for dengue transmission have occurred since 2000, allowing mosquitoes to invade new territories across Europe. Around half of the world's population are now at risk.

Through adolescence and into adulthood, a child born today will be breathing more toxic air, driven by fossil fuels and made worse by rising temperatures. This is especially damaging to young people as their lungs are still developing, so polluted air takes a great toll, contributing to reduced lung function, worsening asthma, and increasing the risk of heart attacks and stroke.

As global CO2 emissions from fossil fuels continue to rise (up 2.6% from 2016-2018), energy supply from coal is increasing (up 1.7% from 2016-2018), reversing a previous downward trend, while premature deaths related to PM2.5 remain stagnant at 2.9 million worldwide. Coal contributed to over 440,000 premature deaths from PM 2.5 in 2016, and likely over 1 million deaths when all pollutants are considered.

This might only be the tip of the iceberg, researchers say. If Europe were to experience PM2.5 at 2016 levels over the lifetime of the current population, economic losses and health costs of air pollution-related disease and premature death could reach €129 billion a year.

Throughout their adult lives, extreme weather events will intensify

Later in life, a child born today will face increased risk from severe floods, prolonged droughts, and wildfires. 152 out of 196 countries have experienced an increase in people exposed to wildfires since 2001-2004--with a financial toll per person 48 times larger than flooding. India alone saw an increase of more than 21 million exposures, and China around 17 million, resulting in direct deaths and respiratory illness as well as loss of homes.

As the fourth hottest year on record, 2018 saw a record-breaking 220 million more over 65s exposed to heatwaves than in 2000 (63 million more than in 2017)--with older city dwellers with chronic health conditions in Europe and the Eastern Mediterranean most vulnerable to heat-related illness such as stroke and kidney disease. Last year, Japan had 32 million heatwave exposures, equivalent to almost every person over 65 experiencing a heatwave.

More frequent and longer heatwaves will redefine global labour capacity, the report warns. In 2018, a potential 45 billion additional hours of work were lost due to extreme heat globally compared to 2000. Amid last year's prolonged heatwaves, outdoor agricultural and construction workers in southern parts of the USA lost as much as 20% of potential daylight hours during the hottest month.

Urgent action needed to protect the health of the next generation

Dr Richard Horton, Editor-in-Chief of The Lancet, called on clinical and global health communities to mobilise: "The climate crisis is one of the greatest threats to the health of humanity today, but the world has yet to see a response from governments that matches the unprecedented scale of the challenge facing the next generation. With the full force of the Paris Agreement due to be implemented in 2020, we can't afford this level of disengagement. The clinical, global health and research community needs to come together now and challenge our international leaders to protect the imminent threat to childhood and lifelong health." [3]

If the world's actions match the ambition of the Paris Agreement pathway, that limits global warming to well below 2 degrees C, a child born in the UK today could see an end to coal use by their 6th birthday, with the growth of solar and wind energy resulting in cleaner air across the country.

In France, the last petrol and diesel cars will be sold by the time they turn 21, with cycle ways and green spaces supporting healthier more liveable cities. By their 31st birthday, a child born today could see the world reach net-zero emissions, ensuring a healthier future for coming generations from cleaner air, safer drinking water, and more nutritious food.

The Lancet Countdown authors call for bold action to turn the tide on the enormous health impact of climate change in four key areas:

3) Increasing accessible, affordable, efficient public and active transport systems, particularly walking and cycling, such as the creation of cycle lanes and cycle hire or purchase schemes.

"The path that the world chooses today will irreversibly mark our children's futures", says co-author Dr Stella Hartinger from Cayetano Heredia University, Peru. "We must listen to the millions of young people who have led the wave of school strikes for urgent action. It will take the work of 7.5 billion people currently alive to ensure that the health of a child born today isn't defined by a changing climate." [3]

[1] Country-level findings across all 41 indicators are available from the Communications team on request.

[2] Following a business-as-usual pathway, based on the current global trajectory, is predicted to result in average levels of warming of 4°-7°C by the end of the century.