June 2020 was just 0.01°C below the record-breaking temperatures of June 2019, with exceptional heat in Arctic Siberia, according to the Copernicus Climate Change Service (C3S). Globally, temperatures last month were 0.53°C warmer than the average June from 1981-2010.

Over Arctic Siberia, average temperatures reached as high as 10 °C above normal for June, fuelling severe wildfires. During both June and for the last 12 months, Siberia stands out as the region with the largest anomalies.

This culminated in a temperature of 38°C on 20 June at the Verkhoyansk observing station, according to the Russian Federal Service for Hydrometeorological and Environmental Monitoring (Roshydromet). WMO will now verify whether this is a new record temperature north of the Arctic Circle.

Siberia and the Arctic Circle in general have large fluctuations from year to year and have experienced other relatively warm Junes before. For May, C3S reported on a long period of warmer than average temperatures across western Siberia, starting as early as December 2019. In June, however, western Siberia saw mainly below average temperatures, illustrating the large variability across the vast Siberian region.

Data from C3S, which is implemented by the European Centre for Medium Range Weather Forecast (ECMWF), further indicate that snow cover and surface soil moisture reached record lows for June over the Siberian Arctic in June 2020. These are also factors, which likely played a role in the unusually high temperatures reached in the region.

The lower-than-usual soil moisture is believed to have been a contributing factor to increased fire activity, mostly concentrated in the far north-east of Siberia. Scientists from the Copernicus Atmosphere Monitoring Service (CAMS), also implemented by ECMWF, have been monitoring wildfire activity since the start of the boreal fire season in early May. 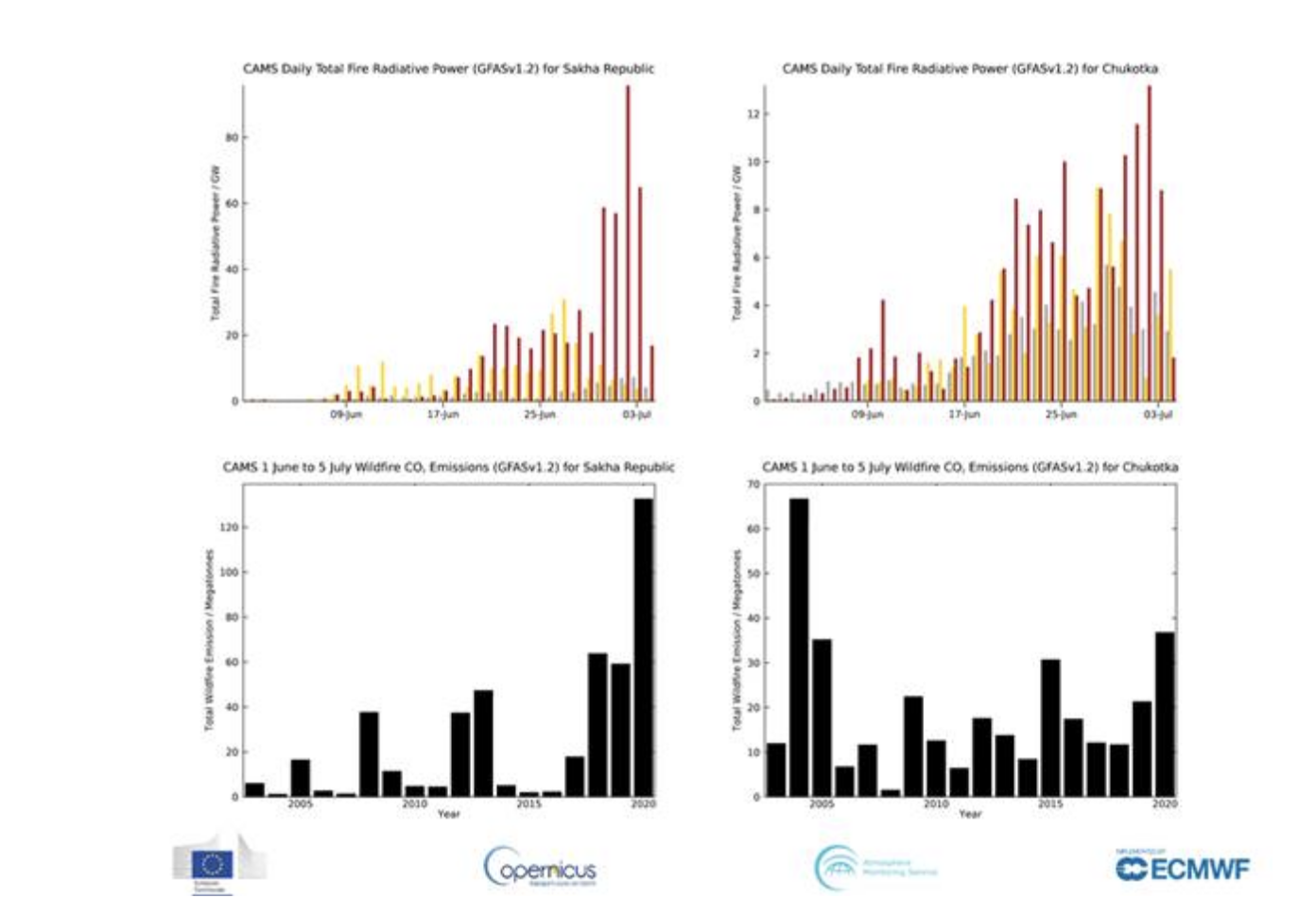 The number and intensity of wildfires in the Sakha Republic and Chukotka Autonomous Oblast and, to a lesser degree, parts of Alaska and the Yukon Territories, have been increasing since the second week of June and have resulted in the highest estimated emissions in the 18 years of the CAMS dataset. For June, an estimated total of 59 megatonnes of CO2 were released into the atmosphere, which is more than last year’s June total of 53 megatonnes of CO2.

Temperatures were predominantly higher than average over land, particularly over the central USA and southern Canada, north-eastern Canada, and most of Africa, the Middle East, China, South America and Australia.

Read the original story here
Share this
Related information
Related links
WMO Statement on the state of the global climate in 2019
Climate change brings fires, floods and moths to Siberia
Countries from Siberia to Australia are burning: the age of fire is the bleakest warning yet
Keywords
Hazards
Heat Wave
Themes
Climate Change