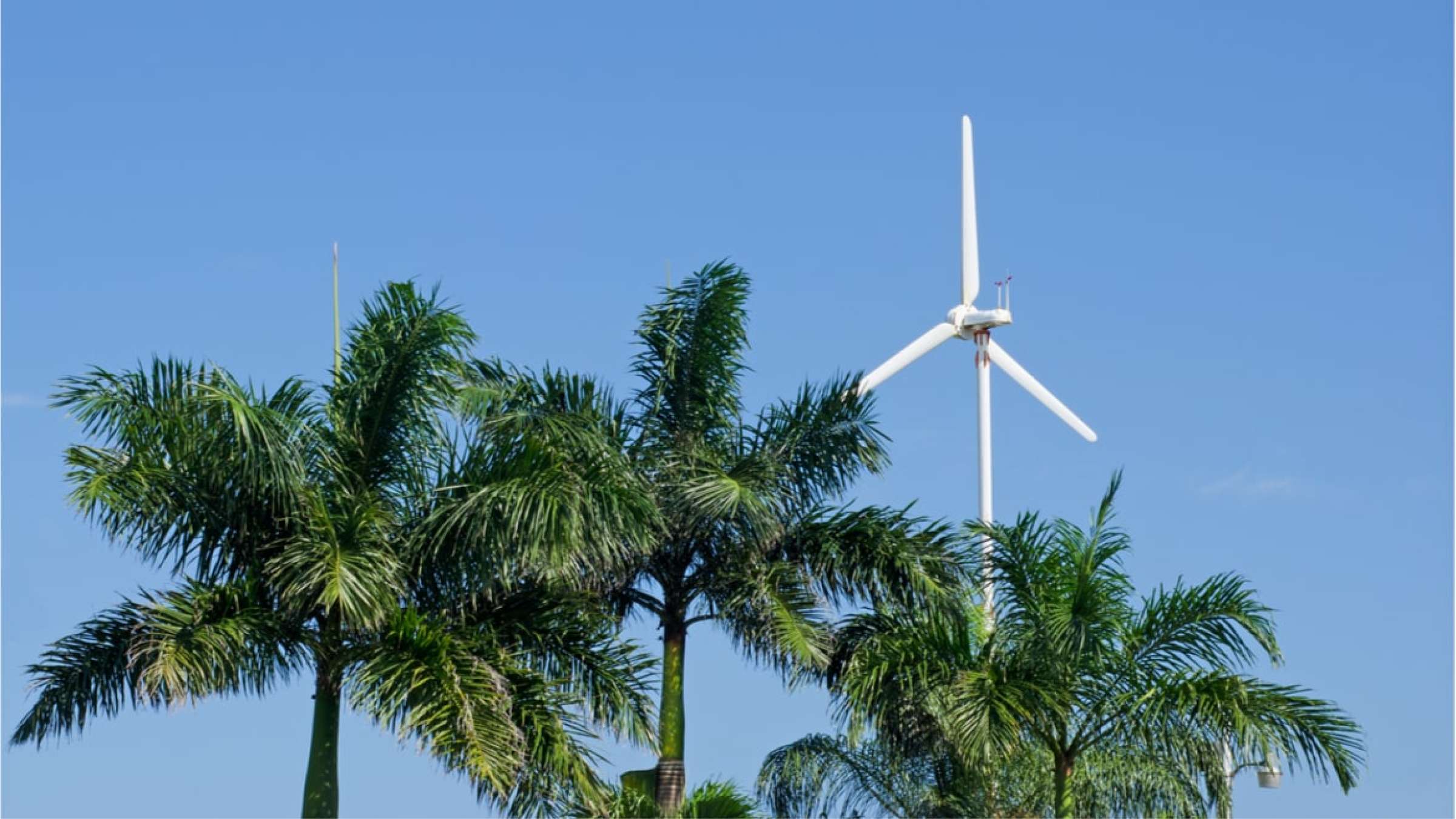 Wind technology is growing—literally. Today’s offshore wind turbines can tower more than 490 feet above ground, their spinning blades churning out up to 8 megawatts (MW) each—about enough to power 4000 homes in the U.S.

But with their increasing size comes challenges. Off the east coast, where offshore turbines are located in the U.S., increasingly powerful Atlantic hurricanes pose risks to the structures themselves and to the future of wind energy. To make those turbines more hurricane-resilient, a team of CU Boulder researchers are taking a cue from nature and turning the turbine around.

“We are very much bio-inspired by palm trees, which can survive these hurricane conditions,” said Lucy Pao, Palmer Endowed Chair in the Department of Electrical, Computer and Energy Engineering.

Traditional upwind turbines face the incoming wind, and to avoid being blown into the tower, their blades must be sufficiently stiff. It requires a lot of material to build these relatively thick and massive blades, which drives up their cost. Turbine blades on downwind rotors, however, face away from the wind, so there’s less risk of them hitting the tower when the winds pick up. This means they can be lighter and more flexible, which requires less material and therefore less money to make. These downwind blades can also then bend instead of break in the face of strong winds—much like palm trees.

Over the past six years, in conjunction with collaborators at the University of Virginia, the University of Texas at Dallas, the Colorado School of Mines, and the National Renewable Energy Laboratory, Pao’s team has collaborated to develop the SUMR (Segmented Ultralight Morphing Rotor) turbine, a two-bladed, downwind rotor to test the performance of this lightweight concept in action. On June 10 at the American Control Conference, the CU researchers presented results from a new study of four years of real-world data from testing their 53.38 kilowatt demonstrator (SUMR-D) at the National Renewable Energy Laboratory’s (NREL) Flatirons Campus, just south of Boulder, Colorado.

They found that their turbine performed consistently and efficiently during periods of peak wind gusts—a satisfactory result.

“The blades are manufactured to be lightweight and very flexible, so they can align with the wind loads. That way, we can reduce the cost of the blades and bring down the cost of energy,” said Mandar Phadnis, lead author on the new study in Proceedings of the 2022 American Control Conference, and a graduate student in electrical, computer and energy engineering.

This innovative work couldn’t come at a better time. Climate change not only demands that we quickly scale up more cost-effective and reliable renewable energy, but rising global temperatures are also likely causing hurricanes to intensify.

Hurricane activity this year in the Atlantic is predicted to be above average, with NOAA’s Climate Prediction Center estimating up to six major hurricanes with winds of 111 mph or higher from June 1 to November 30.

The hidden brain of a turbine

One of the trickiest elements of wind energy generation is dealing with not enough or too much wind at one time. When wind speeds are too low, a turbine can’t produce a useful amount of energy. When gusts are too fast, they can push the limits of a turbine's capacity, causing it to shut down to avoid a system overload.

The inconsistency of wind speed has plagued wind energy since its inception; the lost time spent shutting down the system leads to less energy generated and less efficient production.

Key to Pao’s innovative contributions are improvements to the controller—the part of the turbine that determines when to be more or less aggressive in power production.

“We like to think of the controller as essentially the brain of the system,” said Pao, senior author on the study and fellow at the Renewable and Sustainable Energy Institute (RASEI).

This hidden brain aims to produce efficient wind energy at low cost and with low wear and tear. The feedback controller does this by using measurements of how the system is performing, and then adjusting to better improve the performance, said Pao.

The yaw controller makes sure the turbine is facing the correct direction, the blade pitch controller determines the direction of the blades (dependent on the wind speeds), and the generator torque controller decides how much power to pull off the turbine and onto the grid. While it controls physical components of the turbine, these controllers are essentially a software algorithm that tells the motors what to do.

Pao’s group is not only turning the turbine around to reduce damage from strong winds, but working behind the scenes on its software to maximize the system’s ability to keep running during peak wind events.

“Our work attempts to predict the likelihood or the probability of peak wind gusts occurring, and then tries to mitigate the speed peaks by acting before they happen,” said Phadnis.

NREL’s Flatirons Campus’ was the perfect place to test this in action, as it’s strategically placed to receive the strong winds which shoot out across Highway 93 and onto the mesa, after being funneled through Eldorado Canyon directly to the west.

There, the researchers found that, even through extensive experimental testing, peak generator speeds were below the threshold for their operational controller to keep the turbine running.

In a separate collaboration, Pao and her research group have been working with the University of Oldenburg in Germany to assess the utility of sensors that scan ahead of the turbine to measure the wind coming in and of advanced controllers that command the turbine to respond proactively.

While downwind or two-bladed turbines like the SUMR-D may not come to dominate the wind energy industry, by performing these multi-year, real-world tests, the researchers are able to better understand what might be possible, said Pao.

The control algorithms that they’ve developed could also be equally applicable to traditional three-bladed, upwind turbines, which still dominate both land and offshore markets.

“The advantage of the downwind configuration, however, really comes about when you get to extreme scale turbines, and those are primarily for offshore,” said Pao.

Pao’s group is already addressing these great heights: With their collaborators, they have designed and modeled (but not experimentally tested) large-scale, offshore 25 MW and 50 MW SUMR (downwind) turbines.

Ultimately, she believes a combination of improved controllers, lighter and resilient materials, and strategic turbine configurations could allow for giant offshore turbines to outpace the competition. They’re not only more cost-effective and energy efficient, allowing for one big turbine instead of many smaller ones (which would reduce installation and maintenance costs), and able to capture faster wind speeds higher off the ground, but they could also withstand the more severe weather sure to come.

This study was funded by the U.S. Department of Energy’s Advanced Research Projects Agency - Energy (ARPA-E) and conducted in partnership with the National Renewable Energy Laboratory (NREL).