Welthungerhilfe started its first Forecast-based Action (FbA) intervention in the face of an imminent drought in the North of Madagascar. While the current drought in the South of Madagascar, with more than a million people facing acute food insecurity, made international headlines, areas in the North-East of the island are also experiencing a critical agricultural drought. Significant water requirement deficits impacting crop harvest were detected by Welthungerhilfe’s scientific drought monitoring model in the Ambatondrazaka district. The predictions in our pilot FbA region estimate large harvest losses and continuously rising food insecurities until the lean season in November.

In face of this imminent crisis, Welthungerhilfe implements unconditional cash-transfers to the most vulnerable supporting them throughout the coming months. The mobile cash distributions aim to reduce the risks to food security and prevent negative coping strategies including the insufficient calorie intake through reduction of meals, intake of less preferred food, labour migration, increased school drop-out rate, and/or non-sustainable firewood production. Thereby, it minimizes the loss and damage to drought-affected households. The Early Cash is distributed as unconditional cash grants to help vulnerable households meet their specific needs before the peak of the lean season.

The trigger of the Early Action Protocols led to a disbursement of 196,000 EUR by the Start Finance Facility (SFF). Through these funds Welthungerhilfe Madagascar implements an Early Cash distribution of USD 10 per month for six months to respective 1,500 households. In total, 7,500 people of the most at-risk population are targeted.

The current trigger was met at a relatively low threshold resulting in cash distributions targeting the most vulnerable population in the pilot region to reduce the risks to food security and prevent negative coping strategies (i.e. insufficient calorie intake through reduction of meals, intake of less preferred food, labour migration, increased school drop-out rate, overfishing, non-sustainable firewood production) and minimize the loss and damage to drought-affected households. The Early Cash is distributed as unconditional cash grants to help vulnerable households meet their specific needs before the peak of the lean season.

"Welthungerhilfe developed a model able to combine the Water Requirement Satisfaction Index (WRSI), an index for crop monitoring and drought related water stress, with the exposure (yield reduction function) and the social vulnerability to estimate the impact of the agricultural drought and to predict potential effects on the food security of a population. The trigger in January allowed us to react timely and support the affected communities."

"Welthungerhilfe is able to respond to the various drought situations in Madagascar by flexibly covering different layers of risk: The South facing extreme drought conditions is covered by Welthungerhilfe’s emergency response activities, while less severe dry periods in the North are countered by FbA activities preventing negative effects before they occur."

Trigger of the Scientific Drought Model

In January and February 2021, Welthungerhilfe’s scientific drought monitoring model, a so-called geospatial model (GeoWRSI) combined with vulnerability data, indicated drought conditions in the critical growing phase of the reference crop of upland rice in Ambatondrazaka, Alaotra-Mangoro. The threshold was slightly exceeded, which led to the activation of a scenario within the EAP, targeting the most vulnerable of the population in our pilot region. These were identified in an extensive Household Economy Analysis (HEA) which is a livelihood-based approach to assess the vulnerability of an at-risk population.

More information on our model threshold rationale can be found here. The process of how funding is released, accessed, and disbursed by the Start Finance Facility (SFF) in case of a trigger is described in more detail here. 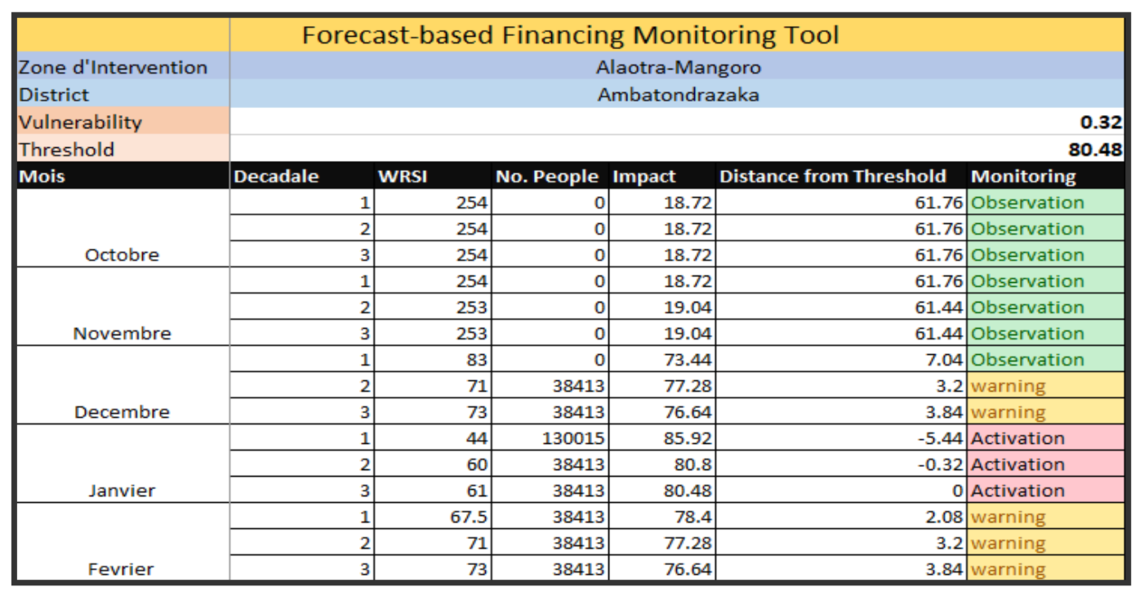 Complimentary activities in the North and South of Madagascar

Besides its FbA Programme predominantly operational in the North of Madagascar, Welthungerhilfe is also implementing emergency activities in the South of the country for populations suffering from one of the worst droughts in the last four decades. Welthungerhilfe provided 300,000 EUR in Emergency Assistance for the affected populations. The Welthungerhilfe team in Madagascar is extending its support in current areas of activity in the South of the country, and helping the most severely affected families to gain access to food and water. In coordination with the UN Office for the Coordination of Humanitarian Affairs (OCHA) and the National Disaster Management Authority of Madagascar, Welthungerhilfe is working to expand life-saving assistance to other districts that urgently need humanitarian assistance.

While simultaneously working in the highly affected South through life-saving measures and also building and extending its reliable FbA mechanism further Welthungerhilfe is able to cover multiple layers of drought risk in the country and support people individually adjust to their needs.

Welthungerhilfe implements its Forecast-based Action mechanism in Madagascar since 2017. The successful pilot project phase from 2017 to 2019 was superseded by Welthungerhilfe’s FbA Programme which is also now implemented in Kenya (Anticipation Hub Project Page Welthungerhilfe Kenya FbA) and Zimbabwe (Anticipation Hub Project Page Welthungerhilfe Zimbabwe FbA). Currently, there are six finalized Early Action Protocols (EAPs) developed covering districts in the Malagasy regions of Atsimo Atsinanana (Farafangana and Vangaindrano), Alaotra Mangoro (Ambatondrazaka and Amparafaravola) and Boeny (Mahajanga II and Marovoay) ready for implementation upon activation. The coverage of EAPs in future will be extended in collaboration with locally-based Start Network Member Organisations in further regions of Madagascar.