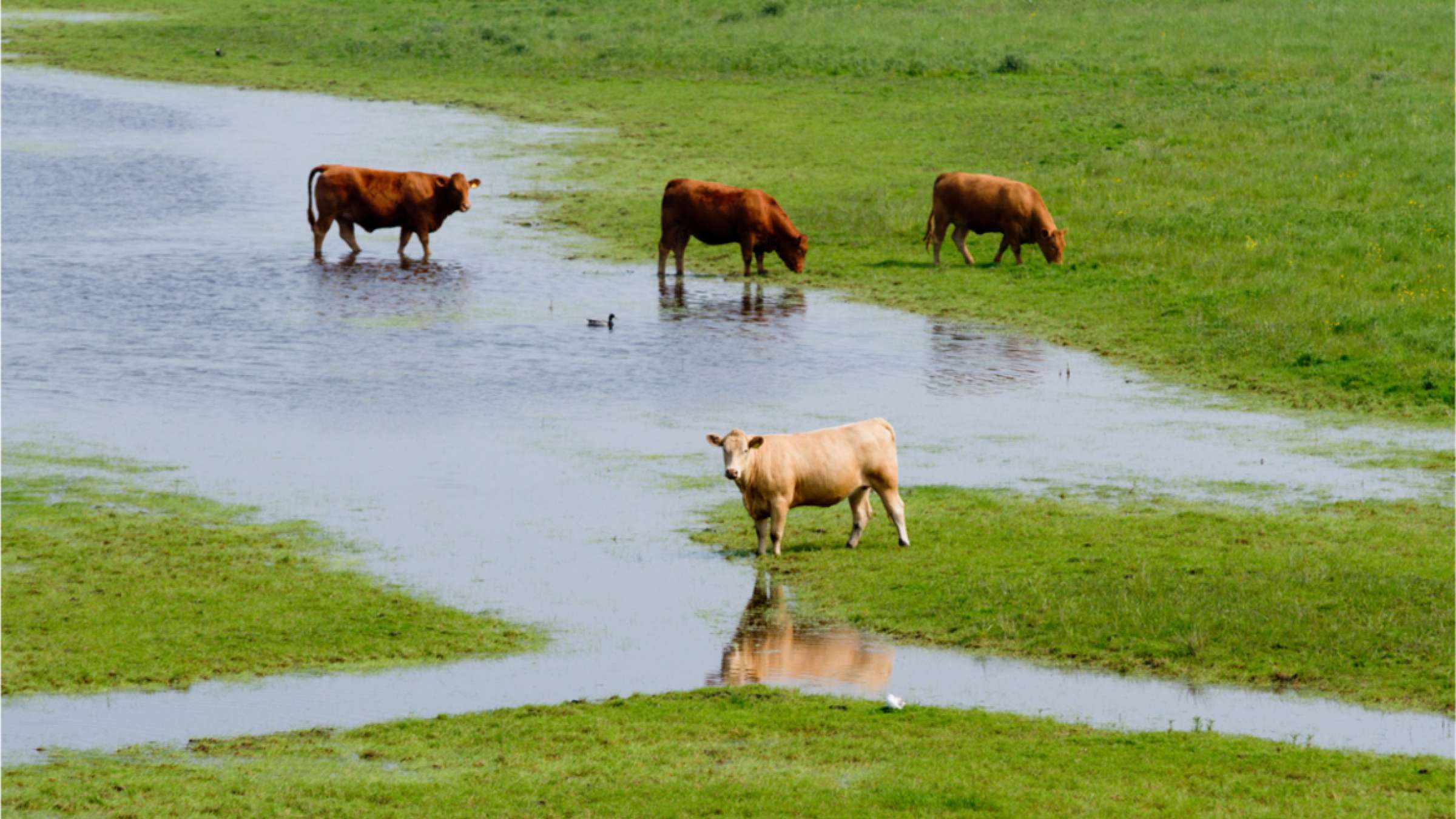 When an atmospheric river hit British Columbia in mid-November, it unleashed record-breaking rainfall triggering devastating floods and mudslides. The provincial government declared a state of emergency on Nov. 17, activating evacuation orders for Merritt, Abbotsford and other communities.

The Sumas Prairie, which lies in the Fraser Valley just east of Abbotsford, is an agricultural hub, housing the majority of the province’s chickens and cows, as well as pig and mink farms. As the floodwaters rose, harrowing images began to circulate on social media and in news reports.

There were submerged barns, cows wading through floodwaters, a helicopter rescue of a pregnant cow and the Canadian Armed Forces relocating broiler chickens from the second storey of barns, while at ground level thousands of birds died from suffocation, from lack of ventilation, or drowning. Industry reports suggest at least 500 cows, thousands of pigs and over a hundred thousand birds perished.

Extreme weather events like the flooding and wildfires in B.C., have occurred in agricultural regions in Australia, the United States and elsewhere, and are likely to become more frequent as the planet warms and the climate changes. Although B.C. farmers are eager to get back to production, the provincial and federal governments must consider that there is more than climate behind these disasters. Industrial-sized confinement farming systems pose insurmountable challenges during hurricanes, floods or wildfires, including significant public health, animal welfare and socio-economic implications.

When the heat dome settled over B.C. in June, it caused the deaths of 595 people, an estimated one billion marine animals and at least 651,000 poultry. And during the 2019-20 Australian bushfires, amid the coverage for loss of wildlife, few media stories surfaced about the thousands of farm animals “confirmed dead, burned in the fires or euthanized due to their injuries.”

In the U.S., catastrophic hurricanes and floods often grip coastal states and harm farm animals. In 2018, Hurricane Florence led to the deaths of 5,500 pigs and nearly eight million poultry in North Carolina.

The nexus between extreme weather events and animal agriculture is further made relevant because of the farm model. Globally, the majority of poultry, pigs and cows are raised in what are called “concentrated animal feeding operations” (CAFOs).

CAFOs are industrialized operations of thousands to millions of genetically similar animals. These operations confine animals whose vulnerability to disasters varies depending on their species, age or sex — a sow confined to a gestation crate, for example. Adjacent to the barns are stockpiles of manure and burial pits.

My research with Elisabeth Stoddard, an associate professor at Worcester Polytechnic Institute, in Massachusetts, has investigated some of the impacts of climate change — worsening floods and hurricanes — on the animal agricultural sector in North Carolina. In our recent report, commissioned by World Animal Protection, our conversations with producers and other agricultural workers found that the disaster measures were not applicable to their operations. What they meant was, there are too many animals for disaster interventions to work.

Producers and agricultural workers can refer to disaster management guidelines, often sector-specific handbooks, to prepare for and respond to a range of disasters. B.C.‘s guidebooksoffer disaster advice, but do not address the scale of farming, making them unhelpful to producers and useless in their efforts to avert animal deaths and injuries.

As governments, companies and individuals make plans to adapt to climate change, the welfare of farm animals must become a priority that goes beyond updating disaster management guidelines to encourage producers to create farm emergency plans and maps, or invest in insurance.

What can farmers do to protect animals?

For the most part, producers have three options during extreme weather events: leave the animals in place, relocate them to safety or move them to market. The last option remains the most difficult as producers operate on a just-in-time production system with slaughter scheduled according to the animal’s market-ready date.

Sheltering in place remains the most used strategy based on logistical constraints. As for relocating animals, producers retain some resiliency. One chicken producer relocated 40,000 chickens, but had to leave as many birds in a barn when it flooded.

The B.C. beef handbook says “unconfined animals can usually take care of themselves during a flood.” Early accounts from the Sumas Prairie suggest that those animals that were outside, roaming freely, fared better than those securely confined in a building or barn. But many “free” animals still succumbed to flood waters, such as calves that drowned when waters rose past a metre.

As the province cleans up, it will need to access and identify farms that require euthanasia for animals with injuries or disease, and mass mortality.

These issues become even more urgent when considering that buried carcasses could contaminate groundwater, produce methane gas or spread pathogens. Despite these challenges, B.C.’s Minister of Agriculture Lana Popham said carcasses may be disposed of in landfills or incinerated.

In the wake of the disaster, B.C. must figure out how it will “build back better.” Here are three things it could do to address climate justice, Indigenous reconciliation and animal welfare:

In Filling the Ark: Animal Welfare in Disasters, Leslie Irvine, a professor of sociology and director of the Animals and Society Certificate Program at the University of Colorado Boulder, writes:

“The solution to the 'problem’ of disasters and CAFOs does not involve making the rescue of farm animals a policy priority. Nor does it involve making stronger waste lagoons or creating strict building codes for CAFOs. Rather, the solution lies in changing the practices of factory farming so that animals, and the humans who share their environment, are less vulnerable.”

Animal agriculture and colonial land practices contribute to climate change and create vulnerabilities that undermine human, animal and planetary well-being. B.C. has an opportunity to reclaim the ethos of ‘build back better’ from business-as-usual mentalities and choose a future that promotes and acts on justice principles for all.