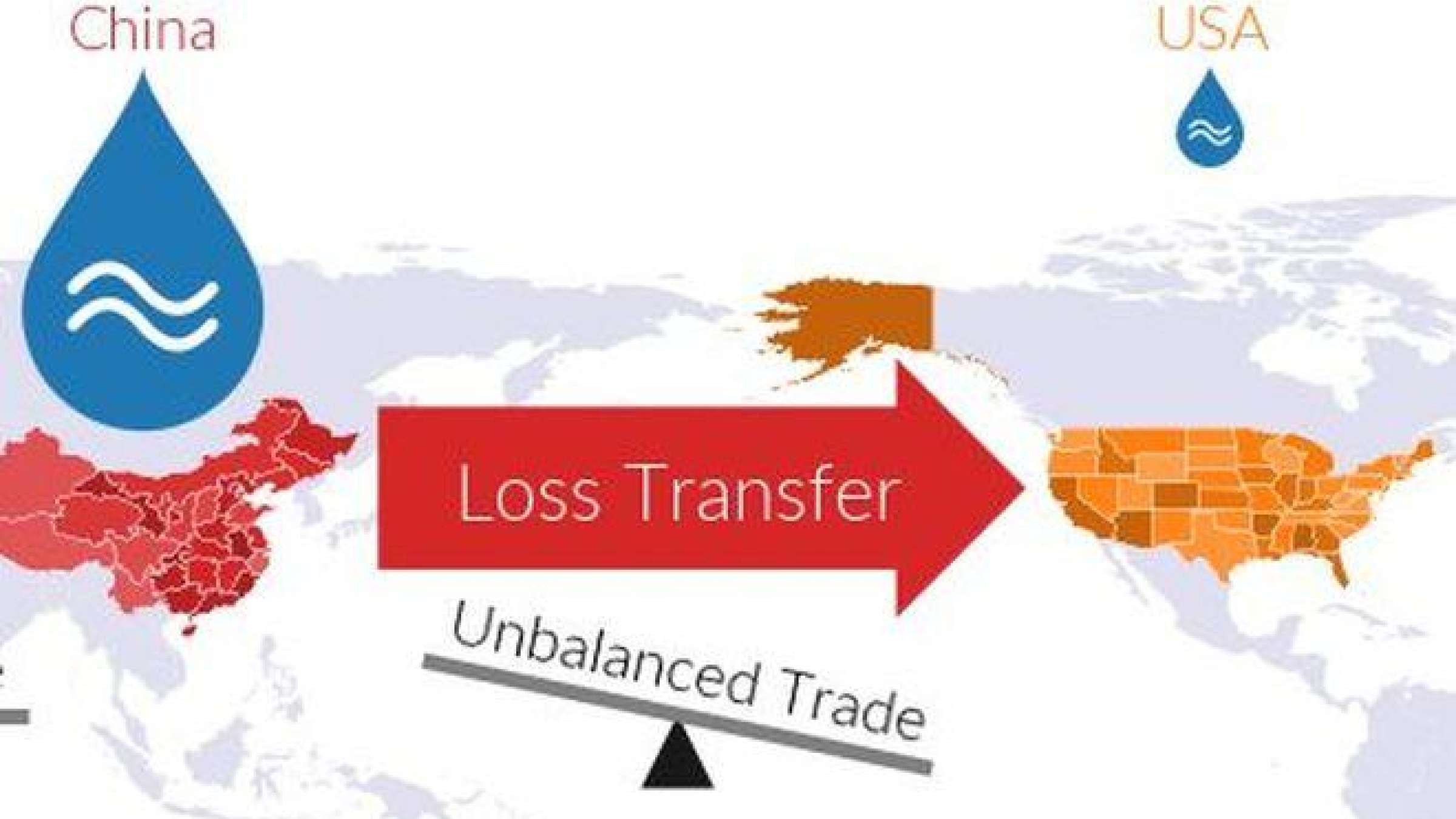 Transfer of economic losses due to river floods through trade networks from China to the US. Image: PIK

Intensifying river floods could lead to regional production losses worldwide caused by global warming. This might not only hamper local economies around the globe – the effects might also propagate through the global network of trade and supply chains, a study now published in Nature Climate Change shows. It is the first to assess this effect for flooding on a global scale, using a newly developed dynamic economic model. It finds that economic flood damages in China, which could, without further adaption, increase by 80 percent within the next 20 years, might also affect EU and US industries. The US economy might be specifically vulnerable due to its unbalanced trade relation with China. Contrary to US president Trump’s current tariff sanctions, the study suggests that building stronger and thus more balanced trade relations might be a useful strategy to mitigate economic losses caused by intensifying weather extremes.

“Climate change will increase flood risks already in the next two decades – and this is not only a problem for millions of people but also for economies worldwide,” says Anders Levermann, project leader from the Potsdam Institute for Climate Impact Research (PIK) in Germany and the Lamont Doherty Earth Observatory, Columbia University in New York.

Without further adaption measures, climate change will likely increase economic losses worldwide due to fluvial floods by more than 15 percent accumulating to a total of about 600 billion US dollar within the next 20 years. While the bulk of this is independent of climate change, the rise is not. “Not only local industries will be affected by these climate impacts,” says Sven Willner, lead author of the study from PIK. “Through supply shortages, changes in demand and associated price signals, economic losses might be down-streamed along the global trade and supply network affecting other economies on a global scale – we were surprised about the size of this rather worrying effect.”

The World Bank’s lead economist with the Global Facility for Disaster Reduction and Recovery, Stéphane Hallegatte, who pioneered research in the area of indirect disaster effects but was not involved in the present study, comments: “This work combines two very innovative lines of work: global risk assessment for natural hazards and network theory to understand how localized shocks propagate in time and space. It contributes to scientific progress in multiple ways, but one of the most important policy messages for me is that the world is so interconnected that natural disasters are not local events anymore: everybody can be affected by a disaster occurring far away. It means that risk management is more than each country’s responsibility: it has become a global public good.”

The study is based on projections of near-future river floods on a regional scale already determined by the greenhouse gas emissions that humans have so far emitted into our atmosphere – impacts after 2035 depend on future additional emissions. The authors investigate the overall economic network response to river flood-related shocks, taking into account the inner dynamics of international trade. They do so with the specifically designed, new Acclimate-model, a dynamic economic computer simulation.

Without major adaptation measures, China could suffer the biggest direct economic losses from river floods – adding up to a total of more than 380 billion US dollar in economic losses over the next 20 years, including natural flood events not related to global warming. This corresponds to about 5 percent of China’s annual economic output. 175 billion of the total losses in China will likely occur due to climate change. “This is a lot,” says Willner, “and it is only the effect by river floods, not even taking into account other climate change impacts such as storms and heat waves.”

The European Union and the United States on the contrary might be affected predominantly by indirect losses passed down along the global trade and supply network. In the US, direct losses might be around 30 billion US Dollar, whereas indirect losses might be 170 billion US dollar in the next 20 years. “The EU will suffer less from indirect losses caused by climate-related flooding in China due to its even trade balance. They will suffer when flooded regions in China temporarily fail to deliver for instance parts that European companies need for their production, but on the other hand Europe will profit from filling climate-induced production gaps in China by exporting goods to Asia. This yields the European economy currently more climate-prepared for the future,” says Willner. “In contrast, the US imports much more from China than it exports to this country. This leaves the US more susceptible to climate-related risks of economic losses passed down along the global supply and trade chain.”

Global trade allows global buffering – India could be a winner

“More intense global trade can help to mitigate losses from local extreme events by facilitating market adjustments,” explains co-author Christian Otto from the Potsdam Institute and Columbia University. “When a supplier is impacted by a disaster hampering its production, international trade increases the chance that other suppliers can jump in and temporarily replace it. Interestingly, the global increase of climate-induced river floods could even cause net gains for some economies such as India, South East Asia, or Australia.”

The study’s focus is not on damages to production facilities of businesses, but to what extent a regional economy stagnates due to flooding. “We adopted a rather optimistic view when it comes to the flexibility and promptness of shifting production towards non-affected suppliers after an extreme weather event,” explains Christian Otto. “Hence our study rather underestimates than overestimates the production losses – things could eventually turn out to be worse.”

“We find that the intensification of the mutual trade relation with China leaves the EU better prepared against production losses in Asia than the US. The prospect that the US will be worse off can be traced back to the fact that it is importing more products from China than it is exporting,” says PIK’s Anders Levermann. “Interestingly, such an unbalanced trade relation might be an economic risk for the US when it comes to climate-related economic losses. In the end, Trump’s tariffs might impede climate-proofing the US economy.”

For resolving this risk and balancing out the negative trade relation, there are generally two options: either isolation or more trade. “By introducing a tariff plan against China, Trump currently goes for isolation,” says Levermann. “But Trump’s tariff sanctions are likely to leave US economy even more vulnerable to climate change. As our study suggests, under climate change, the more reasonable strategy is a well-balanced economic connectivity, because it allows to compensate economic damages from unexpected weather events – of which we expect more in the future.”