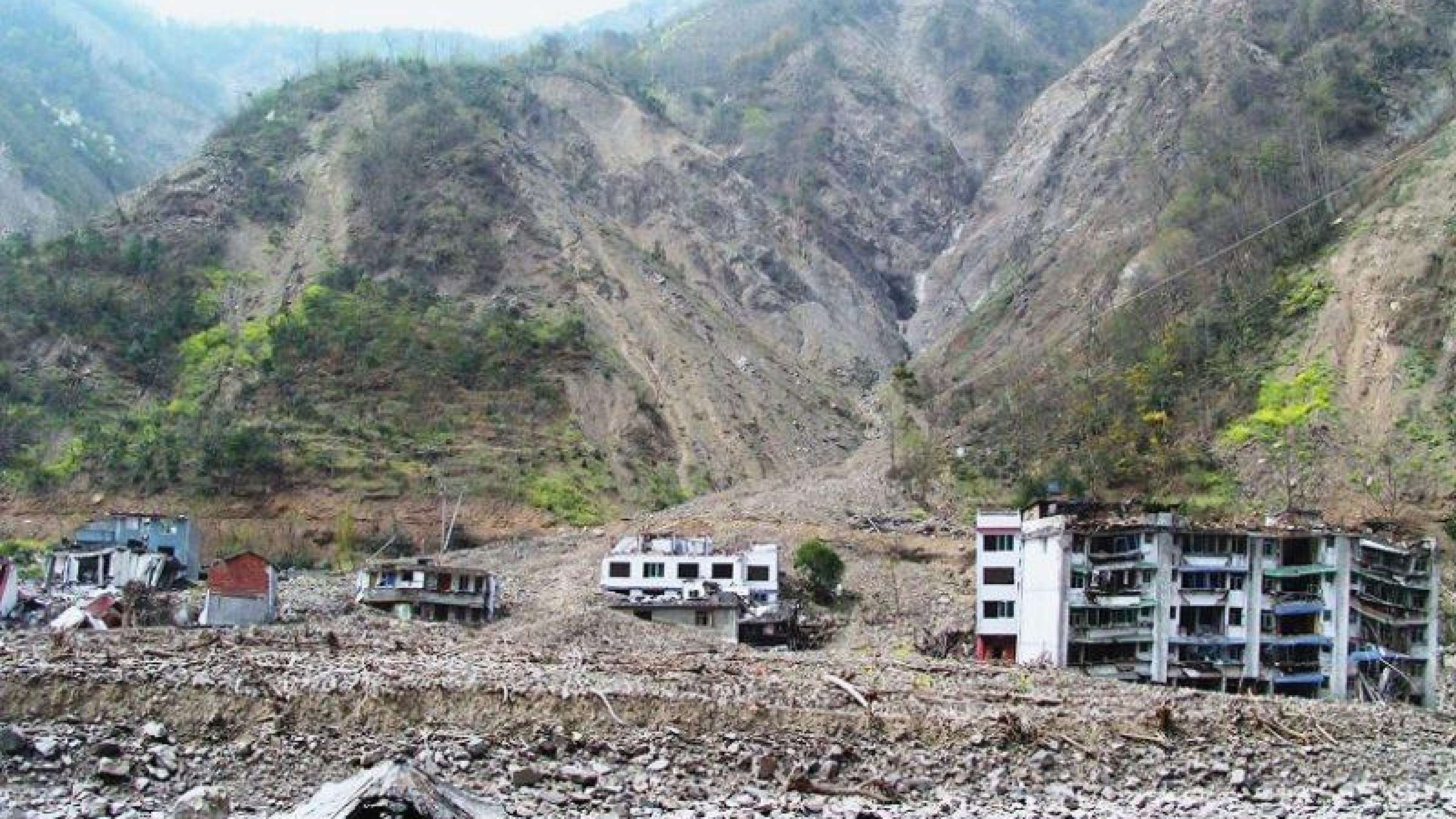 Earthquakes in mountain ranges produce a cascade of geological disturbances and hazards, from enormous landslides to climate change.

The collision of tectonic plates that forms the tallest and steepest mountains on Earth produces large and destructive earthquakes. After the immediate shaking of the ground, a chain of events can be initiated that can affect the built environment and human communities in the short term and modify the entire landscape over a much longer geologic time scale. A recent paper in Reviews of Geophysics explores earthquake-induced chains of geological hazards in mountainous regions over days, years, and millennia. Here, the authors of the paper answer some questions about these hazards and suggest where further research is needed.

What is the greatest geological hazard caused by earthquakes that happen in mountainous regions?

Landslides: thousands of them! While most earthquake-triggered landslides are small in size and travel only short distances, their total mass is huge. However, some of the largest landslides have enough momentum to reach major rivers, damming their course and forming “quake lakes”. A dam may hold for hours or months until the water overtops or breaches, producing a sudden discharge of millions of tons of water, and flooding the valley below, maybe for tens of kilometers. Some dams can hold for millennia, acting as a barrier to the fluvial export of sediments, with their lakes altering the local ecosystem and microclimate profoundly.

An initial landslide caused by the earth shaking is one thing, but earthquake aftershocks and heavy rains can mobilize the debris again and again. Up to years later, masses of water-saturated debris can generate fearsome debris flows that can flood valleys and swallow entire towns at frightening speeds. Studies have demonstrated that, in the first years after a strong earthquake, landslides can be triggered by rainstorms 5 to 10 times weaker than those that would have caused a landslide before the earthquake

What was significant about the earthquake-induced landslides in Taiwan (1999) and China (2008) and what did scientists learn from these events?

The 1999 Chi-Chi earthquake (Taiwan, magnitude 7.6), and the 2008 Wenchuan earthquake (Sichuan, China, magnitude 7.9) prompted intense research into earthquake-induced landsliding. They have presented an opportunity to make direct observations of the ongoing geological impacts of recent large quakes.

Researchers have used these two events to investigate the controlling factors of coseismic landslides, the mechanism and changing rainfall thresholds of post-seismic debris flows, patterns of sediment transport, and much more.

The Chi-Chi earthquake was possibly the first time that high-resolution satellite observations were used to track, even on a monthly basis, the activity of the earthquake-induced landslides and the post-earthquake sediment dynamics.

Meanwhile, records of sediment concentration in river waters collected routinely at river gauging stations in Taiwan and Sichuan made it possible to quantify the magnitude and timing of the earthquake perturbation.

The most significant increases in sediments in rivers were associated with intense rainfall events that occurred in subsequent years, which demonstrated the importance of fluvial transport capacity in regulating the pace of landslide-sediment evacuation.

What is the overall balance between seismic uplift and landscape erosion?

It’s very intriguing to consider whether large earthquakes are more important for the generation of new topography through seismic uplift or for the erosion of topography through landslides. They certainly counterbalance one another, but the frequency and spread of earthquakes compared to the rate at which sediment is removed can substantially influence the calculation of this mass balance. Reconciling this has not yet received formal consideration in the scientific literature. One fascinating hypothesis is that landslide-driven seismic erosion can focus near active faults. The resulting unloading of the crust could, in turn, trigger more earthquakes and generate possible feedbacks between earthquakes and erosion.

Besides topographic changes, what are the other effects of earthquakes and their associated landslides?

One notable impact of landsliding is that it can alter the carbon budget. Carbon stored in rock, soil and vegetation that is mobilized by a landslide may be retained in the debris pile; it may be removed by a river and either transported away from the area or buried in sedimentary deposits; or it may be oxidized either in landslide deposits or during fluvial transit releasing carbon back to the atmosphere as carbon dioxide. Data from the Wenchuan region showed that the flux doubled after the earthquake.

In contrast, sulfide oxidation can release carbon dioxide into the atmosphere.

The net effect of coseismic landslide-induced chemical weathering on the carbon cycle could thus depend on the balance between these two processes.

What are some of the other unresolved questions where additional research, data or modeling is needed?

In modeling sediment dynamics associated with landslide, two important issues remain particularly challenging. The first is what determines how much landslide sediment from a given event is delivered to the main river channels, as opposed to being isolated on the slopes. The second is what determines the ability of earthquake-derived sediment to move through a fluvial network, in particular how coarse landslide material can be mobilized and transported downstream. Addressing these questions is key for obtaining a systematic understanding of this sedimentary chain, and thus setting the foundations for predictive modeling.

We also advocate for more multidisciplinary collaboration to study earthquake-induced hazards. This field requires the understanding of landscape morphology, landslide mechanisms, erosion and sediment transport, landslide hazard and risk, and much more. Quantifying and predicting a chain of geologic hazards that may develop over short and long timescales requires a joint effort.