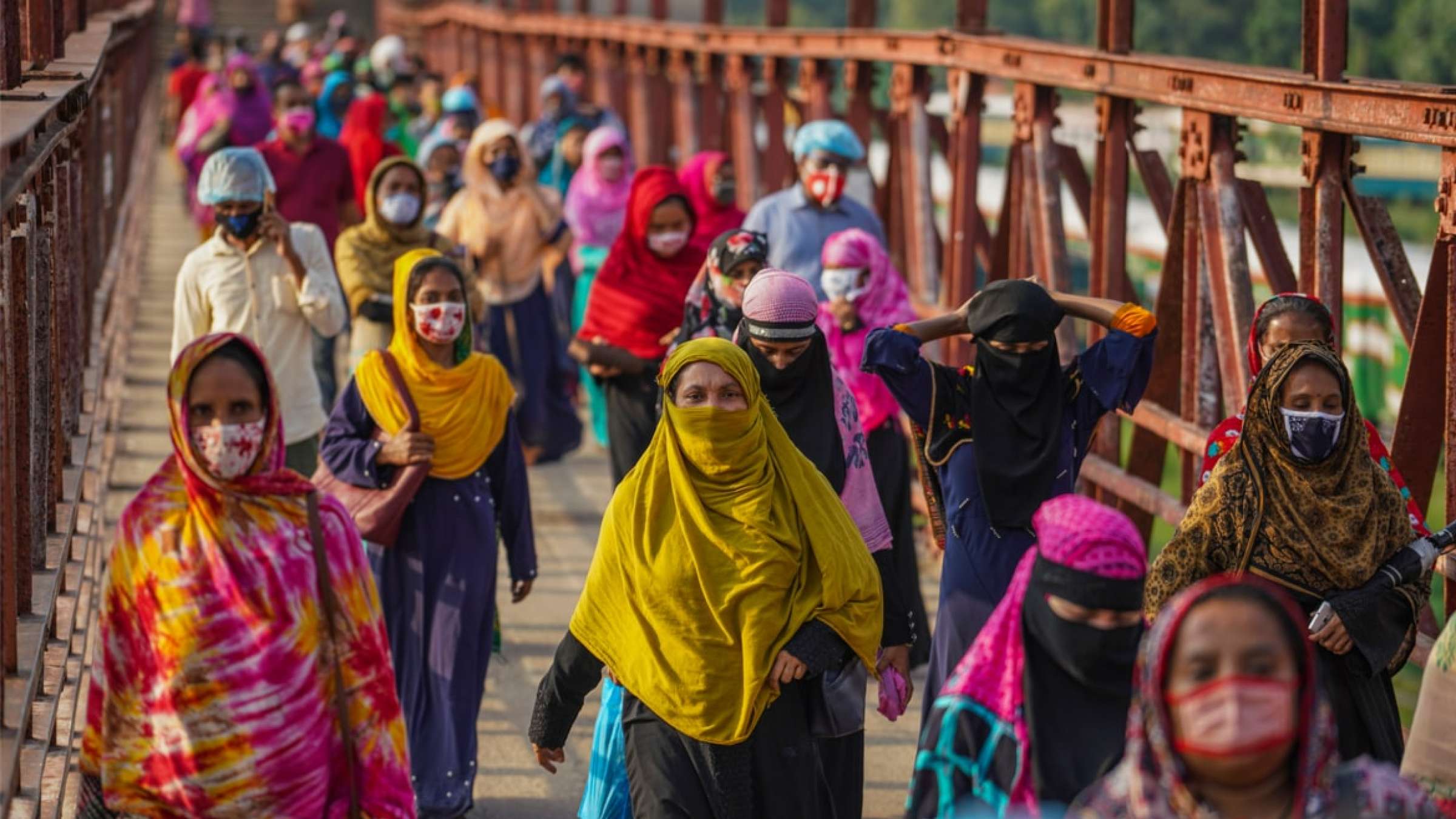 DHAKA - Five years ago, Belal Hossain left his home in the low-lying region of Garuikhali, near the coastal mangroves of southern Bangladesh, to work as a builder in a construction company more than 2,000 miles (3,219 km) away in Malaysia.

The 29-year-old said leaving his village in the Sundarbans - a fragile ecosystem already being affected by climate change impacts, from soil salinity to higher seas and river erosion - was the only way he could feed his family of five.

But the company he worked for in Malaysia suffered losses due to COVID-19 and was forced to make cuts. Hossain lost his job and returned home in March this year.

"Soon after I came back, we were hit by Cyclone Yaas and my family's farmland got devoured due to the rising water," he told the Thomson Reuters Foundation.

"I left home because of these problems... and now that I don't have a job, I don't know how I can support my family. It's even more difficult to find work now," he added.

Bangladesh is one of the world's largest exporters of labour, with nearly 700,000 people getting jobs abroad annually prior to the pandemic.

But thousands have been left without work in the last two years as the pandemic has slowed economies around the world.

Climate researchers said stress levels among migrants who leave regions grappling with climate change effects to seek work elsewhere are far higher than others moving from environmentally stable regions, emphasising the lack of data on their situation.

"For climate migrants, the problem is much bigger," said migrant researcher Shakirul Islam. "Firstly, the job loss due to COVID affects their livelihood and then they have to return to their villages which were always vulnerable."

"Aside from needing to feed extra people, since the migrants are back home and jobless, they also have to deal with cyclones and floods," added Islam, who is founder of the Ovibashi Karmi Unnayan Program, a Dhaka-based think-tank.

Atiq Rahman, head of the Bangladesh Centre for Advanced Studies, said there was a dearth of knowledge about the "dual impact" on climate migrants and that more studies were needed to prevent these groups from falling into poverty.

Home to at least 160 million people, aid agencies say the South Asian nation has seen a rise in the proportion of its people living below the poverty line during the pandemic - which had reduced to about a fifth in 2019.

Bangladesh is also regarded as one of the countries most at risk as the planet warms, bringing worsening storms and floods.

Migration to escape encroaching oceans in Bangladesh's coastal regions is set to accelerate in the coming years, researchers have warned.

It could drive at least 1.3 million Bangladeshis from their homes by 2050, the American Geophysical Union, a nonprofit international scientific group, estimated in April.

Today, most migrants from coastal areas end up in city slums where they get informal support from relatives, experts say.

Migration researcher Tasneem Siddiqui, who has worked with the International Labour Organization on a study analysing the connections between COVID-19, climate change and labour migration, stressed the need for "more innovative" use of money earmarked for helping people adapt to climate change.

"Right now, funds are mainly used for creating crops that are resistant to salt or that can grow under water... But for true adaptation, we need to have proper plans that make cities more migrant-friendly and develop rural areas," said Siddiqui.

Emergency guidelines are needed on helping climate migrants, as well as a budget to create jobs for them, added the founder of the Refugee and Migratory Movements Research Unit.

Siddiqui's forthcoming report outlines how workers from the Sundarbans who returned after losing jobs to COVID-19 last year had to deal with Cyclone Amphan in May 2020, which affected millions of Bangladeshis and Indians.

"Both male and female migrant workers who went back to their villages faced multiple crises, such as the absence of any means to access livelihoods as well as the simultaneous outbreak of natural disasters," Siddiqui wrote in the report.

It also highlights the need for a "just transition" for the migrant labour force and planning for decent work opportunities and green jobs by bringing together government officials, trade unions and employers' organisations.

In January, the Bangladesh government published a strategy to support people displaced within its borders, including steps like creating employment outside cities, ensuring migrants' rights and helping them integrate into local communities.

But details on how the plan will be implemented are yet to be released by the Ministry of Disaster Management and Relief.

For Shiron Mallik, 40, who returned to his hometown of Koyra, about an hour from the Sundarbans, after being sacked from a garment factory earlier this year, such support can't come soon enough.

Tired of constantly dealing with rising waters and river erosion, Mallik had gone to Dhaka in search of a better life.

"My wife and I, we both lost our jobs because our factory shut down during the pandemic. Now I sell fish, but I barely make enough to support my daughter and wife," he said.

"To add to that, the walls of my house have become weak due to the rains," he added. "We are scared that they might fall (down) soon."